Leeds overcame the loss of four players to injury during an incredible contest to beat Wolves 3-2 after Raul Jimenez had been sent off.

The Whites were forced into three first-half substitutions and were 2-0 down at the interval after goals by Jonny and Francisco Trincao. But Jimenez’s dismissal sparked a recovery as Jack Harrison, Rodrigo and Luke Ayling found the net to give the visitors all three points.

Leeds chief Jesse Marsch opted to change just one from his team that beat Norwich City 2-1. Harrison came in for Raphinha who had to sit out the match due to a positive Covid-19 test.

But the sight of both Liam Cooper and Kalvin Phillips back on the bench after long-term injuries would have been a boost. Patrick Bamford was once again handed a start after being given the nod against the Canaries.

Leeds gave themselves some breathing room with last week’s victory. But they knew that they were still very much in the middle of a relegation battle.

And the Whites made a bright start at Molineux, with Dan James letting fly from distance in just the third minute. His effort sailed over the bar but Rodrigo’s flick from James’ cross a few minutes later was at least closer to the target.

The game began at a frenetic pace, with Podence forcing Illan Meslier into a save in the eighth minute. And Bamford should have done better when finding himself free inside the Wolves box. 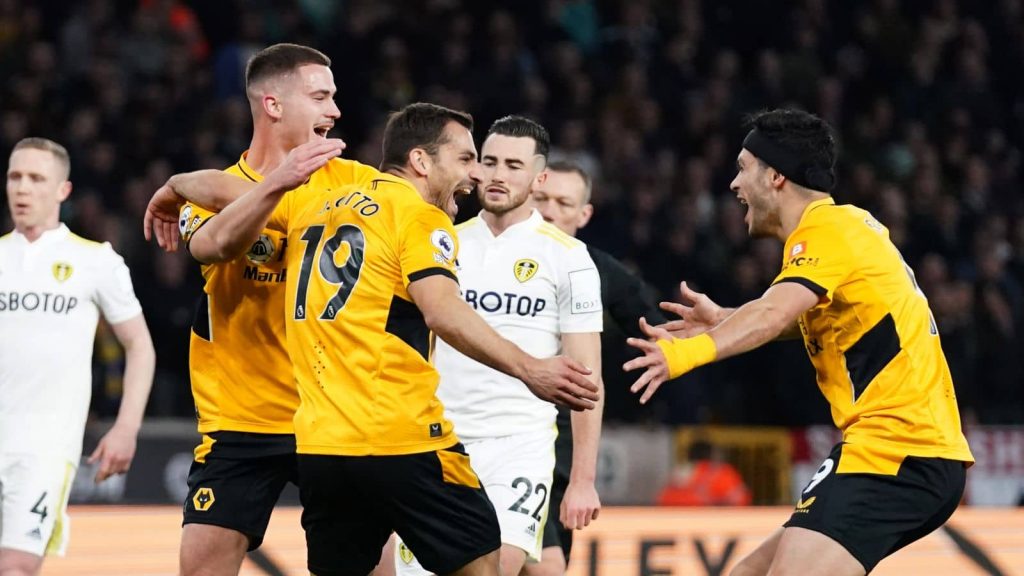 Maybe with a few more games under his belt the 28-year-old would have found the target. But disaster struck on 22 minutes as Bamford was forced from the pitch due to yet another injury.

He was replaced by 20-year-old Sam Greenwood and just a minute later Wolves took the lead. And it was another substitute who played a big part in the goal.

Trincao replaced the injured Ruben Neves and his first touch found Jonny. The 28-year-old Spain international defender made no mistake drilling past Meslier.

Marsch was then forced to make a second substitution as Diego Llorente suffered a back injury and was replaced by Robin Koch.

There were eight minutes of first-half injury time due to the three substitutions and Wolves dominated them all. And incredibly Leeds were forced into a third change as Mateusz Klich suffered a cut above his eye and was replaced by youngster Charlie Cresswell.

Trincao had already struck the woodwork during stoppage time but he doubled the hosts advantage just before the break. The 22-year-old fired past Meslier and into the corner to send the home faithful wild.

The second half began at a similar pace. And the physios were soon back in action as Jimenez collided with Meslier. 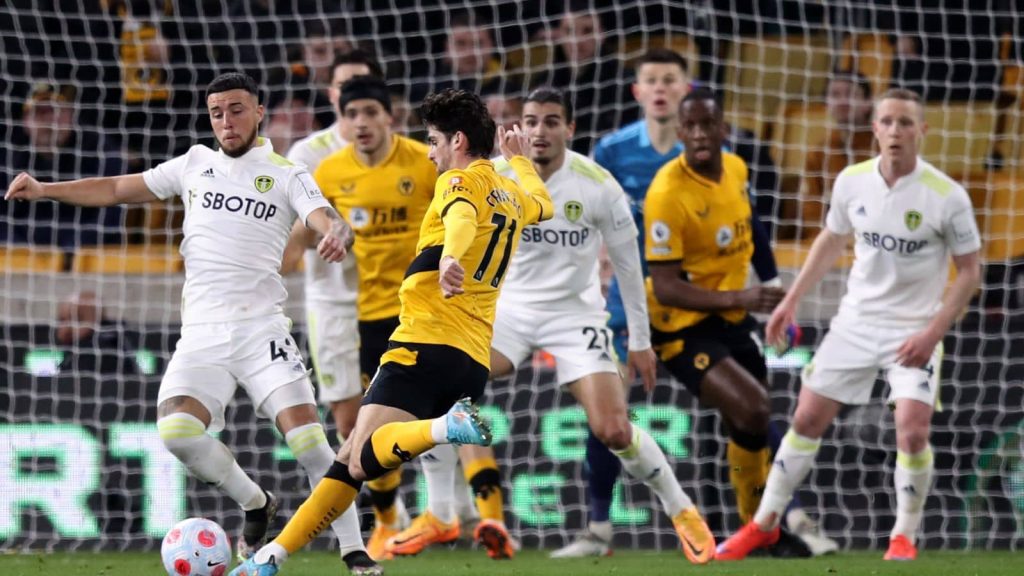 Referee Kevin Friend did not like the Mexican’s challenge and produced a second yellow card, reducing Wolves to 10 men. But Meslier became the fourth Leeds player substituted after the collision, with Kristoffer Klaesson taking the gloves.

Leeds were allowed to use four subs as Klich’s substitution was down to concussion. The sending off gave the visitors some hope and they were back in the game just after the hour mark through Jack Harrison.

Luke Ayling’s effort hit the post and the ball eventually fell to Harrison who fired past Jose Sa from close range. And three minutes later Leeds were on level terms.

James effort hit the woodwork and Rodrigo was on hand to turn in the rebound. The away end was rocking as the fans began to dream of an unlikely victory.

It was Leeds who looked the more likely to score as they continued to attack the ten men of Wolves. And Harrison forced Sa into a one-handed save as time ran out.

Leeds continued to pile forward and won a scintillating contest right at the death. Wolves failed to deal with a free-kick into the box and Ayling was on hand to smash the ball home.

It capped an amazing turnaround and a huge boost for Marsch’s men in their quest to beat the drop. The result puts the Yorkshire club seven points clear of the relegation zone.

Marsch will be delighted with the result but counting the cost of so many injuries.