A brace from Raheem Sterling plus goals by Aymeric Laporte, Rodri and Phil Foden saw Manchester City thrash Newcastle 5-0 at the Etihad.

The comprehensive triumph at the Etihad saw the champions return to the top of the table and move a step closer to defending their title. Sterling struck in either half while Laporte found the net during the first 45 minutes. Rodri and Foden made sure of the points with goals late on as the visitors wilted.

Manchester City boss Pep Guardiola made four changes from the side beaten by Real Madrid in the Champions League on Wednesday. Oleksandr Zinchenko, Jack Grealish, Ilkay Gundogan and Sterling were given the nod.

City received a boost when Liverpool could only draw 1-1 draw with Tottenham on Saturday. And they knew that three points against the Magpies would see them put one hand on the trophy.

Kevin de Bruyne was handed an early chance to get the ball rolling but fired wide from a free kick on six minutes. And they nearly paid the price as the visitors should have scored just three minutes later.

Allan Saint-Maximin’s ball to the back post saw Joelinton and Wood unmarked. But the latter’s header flew straight at Ederson.

Laporte should have done better with a header from De Bruyne’s corner but it was not too long before City were in front through Sterling.

Gundogan’s ball to the far post was headed back by Joao Cancelo, with Sterling on hand to head home on 19 minutes.

The Magpies responded, with Wood forcing the ball home on 24 minutes only for the assistant to raise his flag for offside. But they fell two goals behind in the 38th minute as Laporte notched his fourth of the season. 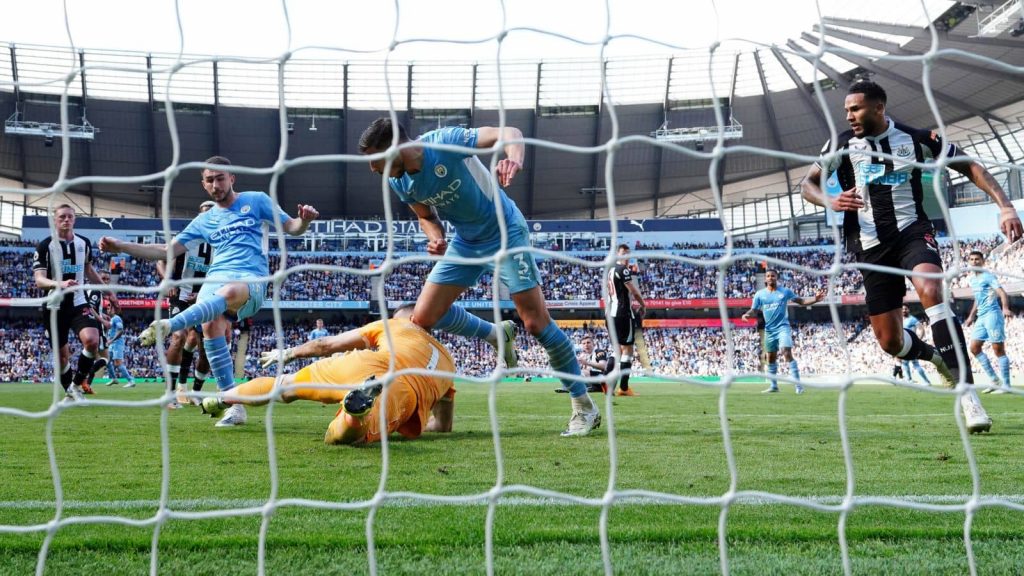 Martin Dubravka failed to hold Gundogan’s shot, with the Spaniard then slotting home the rebound from close range.

City were good value for their half-time lead and maybe should have had more to show for their dominance.

Fabinho replaced Ruben Dias for the second 45 minutes after the Portugal defender was seen limping towards the end of the first period.

And it was the Citizens who bossed the early part of the second half. Sterling’s cross almost deflected in off Lascelles as the hosts piled on the pressure.

Rodri on the mark

Such was City’s dominance that Newcstke failed to complete a pass in the opening 11 minutes of the second half.

But Bruno Guimaraes finally looked to threaten Ederson’s goal with a long-range effort that flew over the crossbar on 57 minutes. Saint-Maximin then followed suit but also dragged his effort wide.

The hosts were not content with just three goals and continued to make the contest resemble a training ground exercise. Zinchenko forced Dubravka into an excellent save on 68 minutes as the champions looked to boost their goal difference.

Howe rung the changes as the half wore on, with Callum Wilson and Kieran Trippier returning from injury to replace Wood and Emile Krafth.

But it made little difference as City toyed with the opposition.

Wilson did have an opportunity to bag a consolation for the north-east outfit. He found himself one-on-one with Ederson but the Brazilian was equal to the task.

Newcastle enjoyed their best spell towards the death but Saint-Maximin’s effort with five minutes to go flew well wide of the target.

But they conceded a fourth one minute into stoppage time as substitute Foden touched home Zinchenko’s effort. And there was still time for a fifth as Sterling added his second of the day in the 93rd minute.

Grealish unselfishly fed his England collegues who smashed home into the top corner.

City are now three points clear of Liverpool with both clubs having three games left to play. And, on this display, it is tough to see Guardiola’s men dropping any points.

The post Job done as Man City sweep past Newcastle 5-0 to look down on Liverpool once more appeared first on TEAMtalk.