After Wednesday’s washout it seems like glorious weather has set in for the rest of the Festival, so I am working on the assumption of soft ground. Of course, that may bring with it a drying, cloying stickiness that some horses will not handle, but unfortunately we will only know afterwards.

Anyway, let’s get rocking and rolling with the Triumph Hurdle at 13:30.

The problem I have with this race is that I like all the top three in the market and I don’t have any issue with their prices, and in those situations I nearly always don’t have a bet, especially when the standard each-way terms are on offer (as they currently are here).

As soon as it started to slosh down late on Wednesday morning, all the 6s about Fil Dor was snapped up, and there is no doubt that a test of stamina on this course promises to bring him closer to his Leopardstown conqueror Vauban.

But they clearly think the world of Vauban (as do the time boys) and Pied Piper is clearly a major factor, even if Davy Russell has deserted him for Fil Dor, so I think each-way punters don’t have much of an edge into this race.

Il Etait Temps is the obvious alternative at a fair 11/1 (was 14s on Thursday morning) after his excellent debut third behind Vauban and Fil Dor in that Grade 1 Spring Hurdle – in fact, I did have a small nibble at 20s on him immediately after that race – but he has plenty of competition for minor honours here.

Colonel could be a Mustard bet in County Hurdle

I also had a few quid on Colonel Mustard at 16s when I had my first proper look at the County Hurdle last week, ahead of the Betfair Cheltenham Festival preview, and I still think he is worth a small win-only interest at 10.09/1 or bigger at 14:10.

It was going to be a 10/1 each way, seven places, selection but the 10s became 8s on Thursday morning.

I appreciate this race is so deep it makes your ears bleed, but everything does look in place for Colonel Mustard to go well, be it the ground, his handicap mark, his Grade 1 form coming back into handicap company and his lightly-raced profile.

Of course, that lightly-raced profile also means he could be too inexperienced for this big bunfight, and his jumping has been a concern in the past – hence I am happy to go win-only – but his Graded runs behind behind Jonbon and Sir Gerhard (and his form with the latter was obviously franked in the Ballymore on Wednesday) means that he looks well treated off 140, and the UK handicapper has left his Irish mark alone.

He has done the same with Farout, who has a similar profile to the selection, and she and Éclair De Beaufeu (in dire form but with a falling mark and that solid, placed Festival form), and both of those made some appeal at 20s and 33s.

As did First Street at 20s after his Betfair Hurdle third but if you are looking for a second string to your bow, you could end up with a whole orchestra.

However, I am going to have another win-only stab on the contest.

And I have decided that man is First Street, just 1lb higher than at Newbury last time, is the one at 20/1 each way, seven places, with the Betfair Sportsbook.

His main asset is his powerful finishing kick, and he could relish the hill. He has a lot more to give, I feel.

Given the manner in which he pulverised the opposition at Haydock in a ridiculously good time, then I am not in a mad rush to oppose the 10/3 favourite Hillcrest in the Albert Bartlett at 14:50.

But there is just something in my punting psyche that pulls me away from backing such horses at those odds, especially when they are faced by 18 horses with winning, progressive, unexposed profiles.

Don’t get me wrong, they are all going to have to up their game to reach his Haydock level (with the exception of fellow market leader Ginto) but there are loads in here with the potential to do so.

I had a small bet on The Nice Guy at 20s when we did this race in our Weighed In Footsteps To The Festival preview, as he looked a stayer in his two bumper wins and he was piling it on late when winning over 2m3f on his hurdling debut at Naas.

He is around 16s on the exchange, which is fair, but he does have a lot to find.

At the moment, I have no plans to have a fresh bet in the race, so I will not tip.

The closest I actually came after a second sweep of the contenders was Shantreusse, as we know he is a grinder – he has already won twice over 3m on heavy – at 14/1 each way, four places, but I genuinely could make a case for six or seven (including Ballygrifincottage) behind the top two.

Can’t get away from Tornado in Gold Cup

On to the big one then, and I have nothing against A Plus Tard and Galvin in the Gold Cup at 15:30 bar the most important aspect of all.

The prices. It’s all about the betting stupid.

I backed Santini at 66s and 50s each way after his Cotswold Chase second – mainly to wind Hugh Cahill up – but the ground has come in his favour now and the 10yo, with a great Festival record, including a narrow second to Al Boum Photo in this race in 2020, is no forlorn hope in a race which is wide open.

The ground has arrived for Royale Pagaille (and, remember, he came back with a bad injury in this race last year), but I just can’t get away from Tornado Flyer at 12/1 win-only with the Betfair Sportsook.

The Sportsbook are paying an extra place on the race but I am going to back him win-only as, although he has never fallen (so I may be being very harsh here) I never think this horse is too far away from a tumble.

That was certainly the case early doors in the King George last time, when he had me getting the prayer mat out after a couple of dicey early leaps, but of course we all know how well he warmed to his task, and made the most of a pace collapse to come through and sluice in.

If people think he was lucky there then they are making a big mistake I feel, as I simply think this horse has always shaped like a stayer and been campaigned over the wrong trip until now.

That Kempton run was only his second attempt over 3m, and his progression once stepped up in trip should not surprise given the way he has shaped in many of his races, notably when third in the Ryanair here last season.

Of course, he has got an extra 2f or so more to travel here on a stiffer track (another reason for going win only perhaps) but I just think it will bring more improvement out of him.

I am paying to find out anyway.

Zambella ticks a lot of boxes in Mares’ Chase

I am keen to take on the three market leaders for various reasons and the rain that came on Wednesday was great news for this mare. 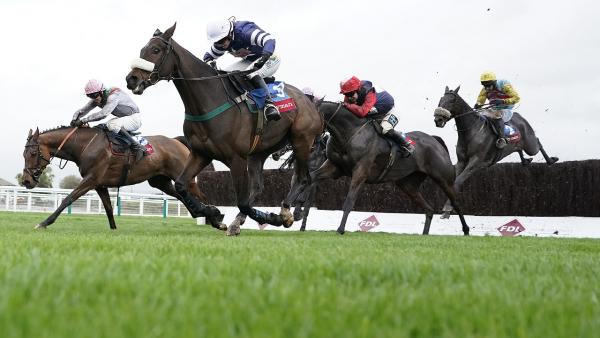 All her form has come on soft or deeper, and she was still in there pitching when falling 3 out (the 28/1 chance was trading at 5.24/1 at the time) in this race last year.

The only blemish on her recent dance card was a defeat over 2m on good to soft at Leicester, but connections thought the race came too soon for her there, and she has been given a break since dotting up at Uttoxeter last time.

She clearly has to improve here but I like her form trajectory, and she has good time credentials on her Aintree win in December.

I hate going with the bleedin’ obvious, but I do think Langer Dan at 9/2 each way, five places, in the Martin Pipe at 17:30, has to underpin your bets here.

Just 2lb higher than when bumping into Galopin Des Champs last season, 9 lengths clear of the third, he is clearly a very well-handicapped horse and you’d be pretty surprised if there were five to finish in front of him.

You lose the price of a chocolate bar if he is only placed, and the win equation looks pretty likely to me.

I have to have Cobblers Dream onside at 21.020/1 or bigger on exchange as he is surely underestimated in the market. Again, I would have tipped him at 20s each way, but that price was cut into 14s just before 11am, annoyingly. Any 16/1+ on the exchange would be fair.

This is only his sixth start over hurdles and he is one progressive horse.

Sure, he is 8lb higher than when winning the Lanzarote last time and this is considerably deeper – the Irish have several likely sorts in here, most obviously Hollow Games – but I loved the way he powered past the line at Kempton .

I think there is some trainer bias included in his price. If a bigger name was training a horse of this profile, he would be nearer 10s.

I hope you have had a great week.

4.10pm Cheltenham – No interest in doing this; do it yourself!