‘Now, I’m coming home… see you soon’: Crisis club Barcelona FINALLY announce the return of Xavi as their new manager (at 2am Spanish time!) with emotional clip of his best moments as club legend puts pen to paper on two-and-a-half year deal

Barcelona have finally announced the appointment of club legend Xavi as the new manager after the Spaniard left Qatari side Al-Sadd on Friday.

He signs a two-and-a-half year deal and takes over the job last held by Ronald Koeman, who was relieved of his duties last week following Barca’s abject defeat to minnows Rayo Vallecano, which left the Catalan giants sitting miserable in ninth place in the league.

His first game will be after the international break in the derby against Espanyol on November 20 and the club released the news alongside an emotional video of his best moments at the club.

Barca said in a statement just before 2am Spanish time on Saturday: ‘FC Barcelona have reached an agreement with Xavi Hernandez for him to become first team coach for the rest of the current season and two more seasons.

‘Xavi Hernandez, a youth team product at Barça, has left his current club, Al-Sadd of Qatar, after talks held over the last few days with the owners of the club.

‘It is expected that Xavi Hernandez will arrive in Barcelona this weekend and that on Monday 8 November his presentation as new FC Barcelona first team coach will take place in an event open to the public at Camp Nou.

‘After the event Xavi Hernandez will appear in a press conference in the Ricard Maxenchs press room.’

Xavi has been drafted back into the fold to take charge of the club he left as a player in 2015 following 17 years of extraordinary success, after Barca fought to take him from Qatari club Al-Sadd and he begged to be allowed to return home. 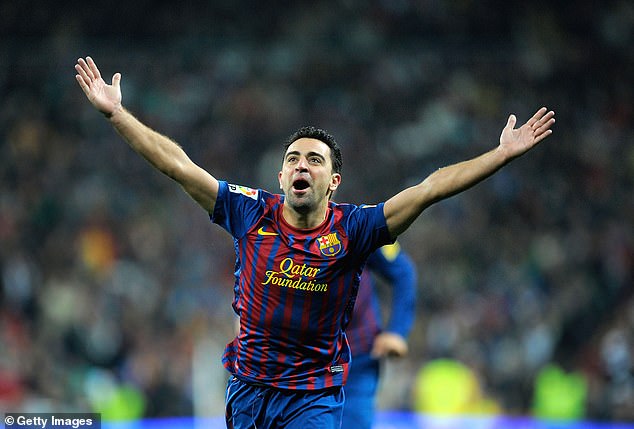 Xavi left Barca in 2015, having gone down as one of the club’s greatest players ever 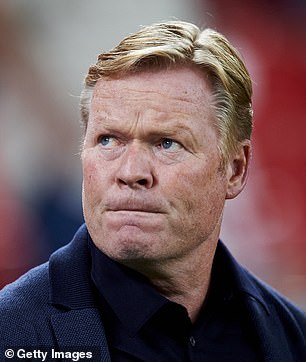 Xavi has taken over after two heartening results following Koeman’s departure, a 3-1 win over Valencia and a 1-0 Champions League victory against Dinamo Kiev, but the scale of his task is enormous, especially for a rookie manager.

Barca will hope that Xavi can follow in the footsteps of another club legend turned rookie boss who they entrusted with the reins in the recent past – Pep Guardiola.

But Xavi made a public plea to the club to allow him to fulfil his dream of managing his boyhood club. 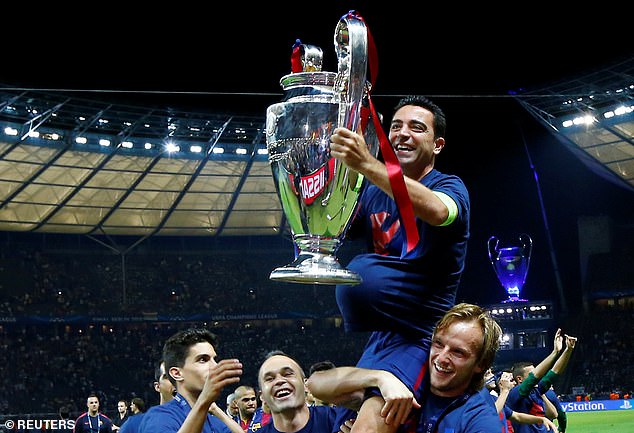 Xavi won the Champions League four times with Barca, including in 2015 (pictured) 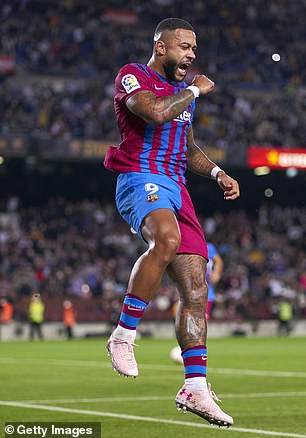 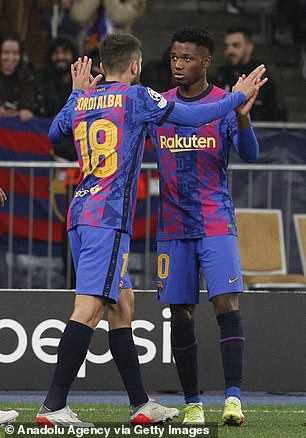 He will be charged with reviving the fortunes of Memphis Depay (left), Ansu Fati (right) and Co

Xavi said his farewell following Al-Sadd’s 3-3 draw against Al-Duhail in the Qatar Stars League on Wednesday, as he shook all of his players’ hands after the final whistle.

Al-Sadd captain Abdelkarim Hassan admitted that he expected his manager to leave for Spain, saying: ‘Everyone is sad because of Xavi’s departure, but he will coach a big team like Barcelona.

‘Xavi presented a new idea to Qatari football and Al-Sadd players and helped us as a great player and coach, and his ideas led us to achieve a lot despite the criticism. We will miss him a lot.’ 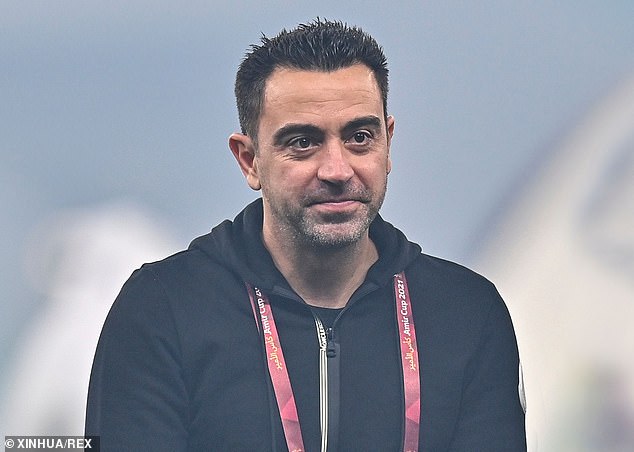 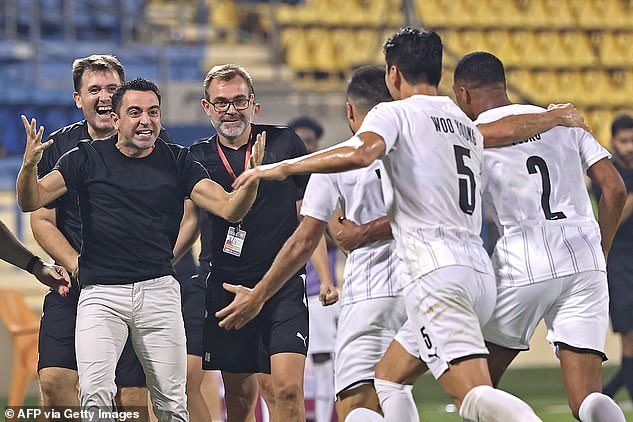 Following Koeman’s dismissal, Barca moved swiftly to install Barca B manager Barjuan – who played 382 times for Barca in the 1990s and early 2000s – as interim boss.

Speaking in a press conference last Friday, ahead of Barca’s clash with Alaves, club president Joan Laporta said of Xavi: ‘My opinion about Xavi as a manager is he is in a process learning, evolving, I have really good references from close people who know him better than me in that way.

‘I talked with him two months ago when we gave Ronald Koeman this confidence because I understand that we had to give him those months, the team needed some time to recover.

‘I have a great relationship with Xavi, I have been speaking with him in the last month, I know his opinion about this squad, what he thinks has to happen.

‘We talk as two friends and in this case my opinion is a really good one.

‘I am talking to him because he loves football, he is a huge Barca fan, it is one of his goals in his life.’

Koeman had received a vote of confidence several months ago, but Laporta accepts he should have been fired sooner.

‘Probably, yes,’ said Laporta. ‘Looking back it is easy to analyse, we felt Koeman deserved confidence to recover some injured players and it was a way to motivate the manager.

‘I looked for some positives. Probably we had to make an earlier decision, I assume the responsibilities of this decision.

‘The situation was not sustainable. We needed to act. We were not on course to achieve the objectives of the season, which is to win titles.’ 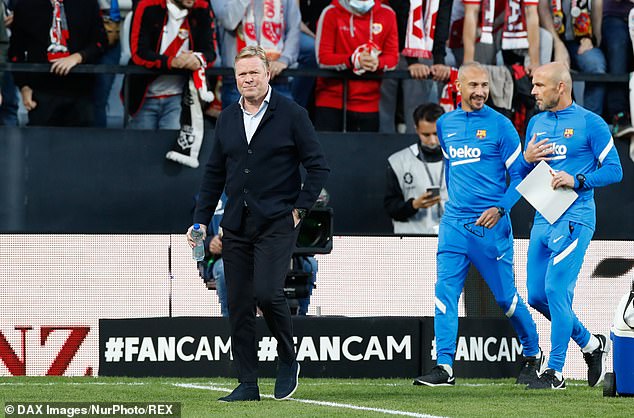 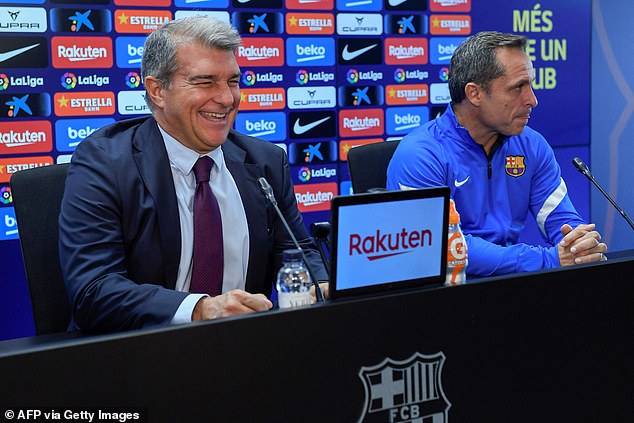