Barcelona’s Dani Alves is on the lowest possible LaLiga salary of around £250,000 a year – but the 38-year-old defender has an £84MILLION release clause in his six-month deal!

Barcelona have slapped an £84million (€100m) release clause on Dani Alves, according to Catalan radio RAC1, despite the fact their new signing will be 39 by the end of this season and has only signed a deal until the summer.

The bizarre detail revealed on the night of his presentation only adds to the sense of the surreal surrounding his second coming at the club, 13 years after he was originally brought in as Pep Guardiola‘s first signing.

RAC1 say the contract signed by Alves does not include the offer of a second year and he cannot play his first game until January, but anyone wanting to buy him would need to pay £84m. 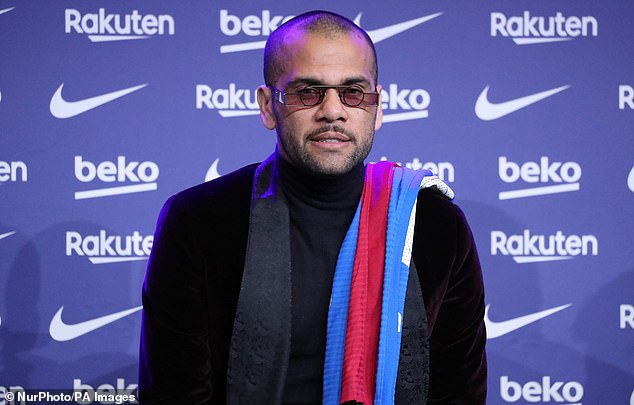 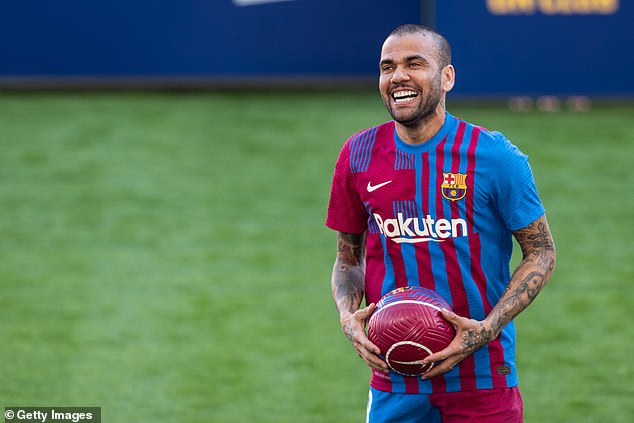 He is reportedly on the lowest possible LaLiga salary of around £250,000 a year, with the club having to wait until the transfer window opens to register him in Spain’s top flight.

Alves has been brought in by club president Joan Laporta, and with the final green light from new first team coach Xavi, primarily to raise team morale at the Nou Camp.

But former Spain and Valencia goalkeeper Santi Canizares cautioned: ‘The best way Alves can help the team is to be fit. He has to first and foremost lead by example. Because you be tired on the pitch and then directing things in the dressing room.’

Alves said on Wednesday that he had come to fight for a first-team place, insisting: ‘I may have less hair now but I have the same desire as always.’

He will have been five months out of action when he returns but he played every minute in the Olympics and helped Brazil win gold last summer.

His former coach from his first club in Europe, Sevilla, Joaquin Caparros backed Alves to succeed.

‘He will help the young players but he will take the more experienced ones along with him as well,’ he said.

‘He has come to be a success so that he can play in the World Cup in Qatar.’