Demarai Gray hit a stunning late winner as Everton came from behind to beat Arsenal 2-1 at Goodison Park to ease the pressure on manager Rafael Benitez.

The home side thought they had taken the lead in the 44th minute when Richarlison headed in from Andros Townsend’s free-kick, but the effort was ruled out for offside following a VAR check.

Moments later, it was Arsenal who went ahead as Martin Odegaard volleyed in having been teed up by Tierney.

Richarlison had the ball in the net again 12 minutes after the break, but once again was adjudged to be offside following a VAR check.

The Brazilian was finally rewarded for his endeavours with 11 minutes to go when Gray’s curling effort hit the bar and the striker looped a header over Aaron Ramsdale from the rebound.

Just when it looked like it would be honours even, Gray hit a stunning curling strike in stoppage-time that flew in off the post and earned the Toffees a massive win.

Jordan Pickford: Hardly had a thing to do as Arsenal struggled to create. Could do nothing about the goal. 6/10.

Seamus Coleman: Had issues with Tierney and Martinelli often doubling up against him and failed to block the former’s cross for Arsenal’s first-half strike. Made a brilliant block to deny Odegaard late on. 6.

Yerry Mina: Started the game well after a return from injury but had to come off again with just 31 minutes on the clock. 6.

Michael Keane: Marshalled Lacazette well as Arsenal failed to capitalise on their lead. 7.

Ben Godfrey: Made a couple of fierce challenges early on to set the tone for the home side, but fortunate not to see red for putting his studs on the face of Tomiyasu. VAR had a look but could not determine that it was intentional. Was eventually booked in the second half. 5.

“That is something he could have avoided.”

Did Ben Godfrey and #EFC get away with one here?

After a VAR check, there’s no red card!

Anthony Gordon: The promising winger had very little impact on the game as the home side failed to create. Subbed late on. 5.

Allan: Put himself about and tried to get Everton on the front foot when in possession. 6.

Abdoulaye Doucoure: Struggled to dominate Arsenal’s midfield pair of Partey and Xhaka and wasteful in possession when going forward. 5.

Demarai Gray: Fired the first meaningful effort of the game over the bar and was lively in the first half. Fine curling effort which hit the bar led to Everton’s equaliser as Richarlison looped in a header off the rebound. Stunning strike in stoppage-time sealed a massive Everton win. 8.

Andros Townsend: Strangely subdued throughout and a woeful free-kick from a promising position saw him get hooked moments later. 5.

Richarlison: Unlucky to see a goal chalked off just before half-time due to a narrow VAR offside call. It was deja vu in the second period when he notched another, only to see a toenail rule him offside again. Finally rewarded for his endeavours late on when he looped a header over Ramsdale after Gray’s effort had hit the bar. 8.

Mason Holgate (on for Mina, 31): Solid after replacing Mina midway through the opening period. 6.

Andre Gomes (on for Townsend, 66): Gave Everton some drive from midfield that was often lacking. 7.

Alex Iwobi (on for Gordon, 87 ): Missed a great late chance to wrap up the points. 5

Aaron Ramsdale: Nothing to do in the opening period as the home side failed to turn their slight dominance into any efforts on target. Could not do a thing about either Everton goal. 6/10.

Takehiro Tomiyasu: Felt the studs of Ben Godfrey to his face in the first half but soldiered on. 6.

Gabriel: Solid as a rock until Everton’s late charge and saw a free header saved by Pickford that would have doubled Arsenal’s lead. 6.

Ben White: Great block to deny a goalbound Gordon effort. Started to wobble as Everton pushed for their equaliser and then late winner. 6.

Kieran Tierney: Excellent cross for Odegaard’s volleyed opener and always looked to get forward whenever possible. Substituted with 25 minutes remaining but was Arsenal’s best player. 7.

Bukayo Saka: Hardly featured throughout as the Gunners failed to find their feet. Was targeted by the aggressive Godfrey and was not up to the challenge. 5.

Granit Xhaka: Protected the Arsenal back line well but got his customary booking for a cynical foul on Gordon. 6.

Thomas Partey: Blazed an effort well over the bar in the first half but put in a disciplined shift before the late drama 6.

Gabriel Martinelli: Hit the bar with a cross in the second period and was mainly on the fringes of the game. Subbed with 20 minutes to go. 5. 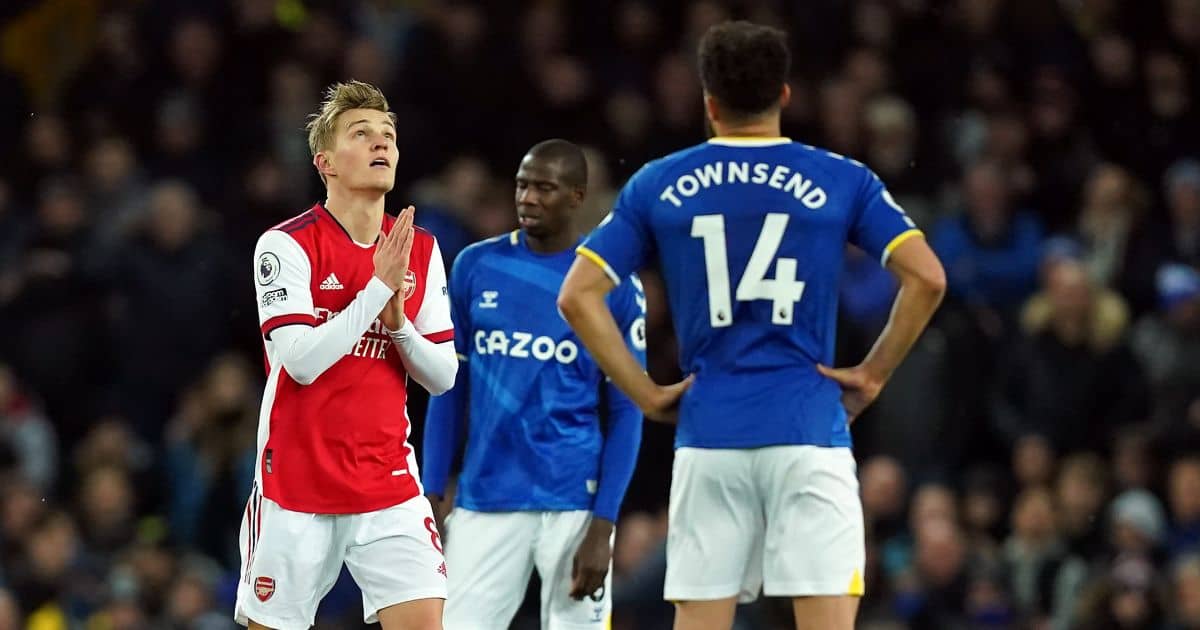 Martin Odegaard: Took his goal superbly on the volley after latching on to a fine Tierney cross. Hardly gave the ball away, despite Arsenal not really being at their best. Booked. 7.

Alexandre Lacazette: Hardly a kick despite Arsenal showing more intent in the second half. Subbed late on for Aubameyang. 5.

Nuno Tavares (on for Tierney, 65): Solid after replacing the excellent Tierney but came under pressure late on. 5.

Eddie Nketiah (on for Martinelli, 71 ): Missed a sitter late on when he headed against the post from four yards out. 5.

Pierre-Emerick Aubameyang (on for Lacazette, 85): Could have snatched a point with seconds remaining but fluffed his lines. 5