Liverpool made it six from six in the Champions League group stage as Mo Salah notched his 20th goal of a remarkable season so far in a 2-1 win at AC Milan.

The Reds became the first English team to win every group game in the competition as they eased to victory in the end against a disappointing Milan side, who crashed out of Europe completely with the defeat.

Milan took the lead in the 28th minute via their first corner of the game. An inswinging kick through a crowd of players took goalkeeper Alisson by surprise and he could only parry to Fikayo Tomori who poked home from close range.

Liverpool equalised eight minutes later and inevitably it came from the boot of Salah, although it owed plenty to Alex Oxlade-Chamberlain and Milan goalkeeper Mike Maignan.

Maignan could not hold Oxlade-Chamberlain’s powerful shot and Salah reacted quickest to score his 20th goal of the season.

Jurgen Klopp’s men completed their turnaround in the 55th minute when Mane robbed Tomori down the left and when Maignan parried his shot, Origi looped home a header from the rebound.

The defeat for Milan, coupled with Atletico Madrid’s win over Porto, meant the Italian side missed out on the last 16 and a Europa League spot too.

Alisson: Could do nothing about Milan’s opener after being exposed from a corner. Produced a good stop from Kessie late on as Milan pushed for an equaliser. 7/10

Neco Williams: Early strike from distance was comfortably saved. Moved into midfield midway through the second period as Jurgen Klopp looked to strengthen his backline by bringing on Joe Gomez. Subbed. 7

See also  Rafa Nadal: I don't think 21 Slams will be enough to be the most ever

Ibrahima Konate: Floated a header wide from a corner in the first half but strong throughout and kept the imposing Zlatan in his pocket for most of the game. 8

Nat Phillips: Superb tackle to deny Theo Hernandez breaking clear into the Liverpool area. Showed unbelievable composure in his own area to fox two Milan attackers in the second half in another impressive performance from the fringe man. 8

Alex Oxlade-Chamberlain: His strike led to Salah’s equaliser and looked to break forward at every opportunity. 7

Tyler Morton: Did not look flustered at all against the Serie A league leaders and played the full 90 minutes. Composed in possession and hardly gave the ball away. 7

Minamino: Should have cleared the corner at the front post that led to Milan’s opener from Tomori. Neat and tidy but without much penetration to his play. Subbed 6

Mo Salah: Notched his 20th goal of the season with a cool finish from eight yards and tested Maignan with another striker in the second period. Subbed with 25 minutes to go and Liverpool in control. 8

Divock Origi: Was a constant threat throughout and produced a great reaction finish to give Liverpool the lead – his first Champions League goal since the 2019 final! Subbed late on. 7 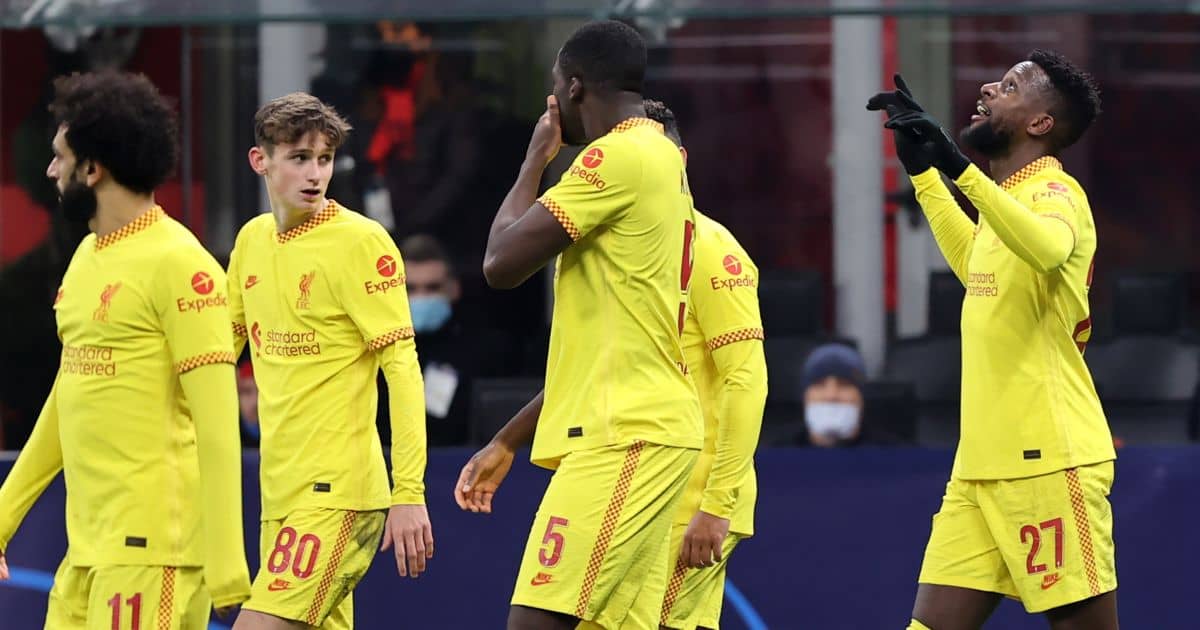 Sadio Mane: Saw his strike in the second half kept out by Maignan, only for Origi to nod in the rebound. Subbed as Klopp looked to give his deadly duo a break. 7

Joe Gomez (on for Mane, 64): Solid as ever when he came on to bolster Liverpool’s backline. 6

Naby Keita (on for Salah, 64): Put on a decent shift to help the Reds keep hold of their advantage. 6