‘Simeone don’t leave’ sang the Real Madrid supporters as their team beat Atletico Madrid to move 13 points clear of them in La Liga.

This 2-0 derby win also moved Real Madrid 18 points ahead of Barcelona. They have played a game more than the two clubs who are traditionally their biggest rivals but the chasm is still huge at such an early stage of the season.

Atletico Madrid were not awful and Thibaut Courtois had to make several important saves in both halves. But the Belgian keeper is part of the reason Real Madrid are currently running away with the league. 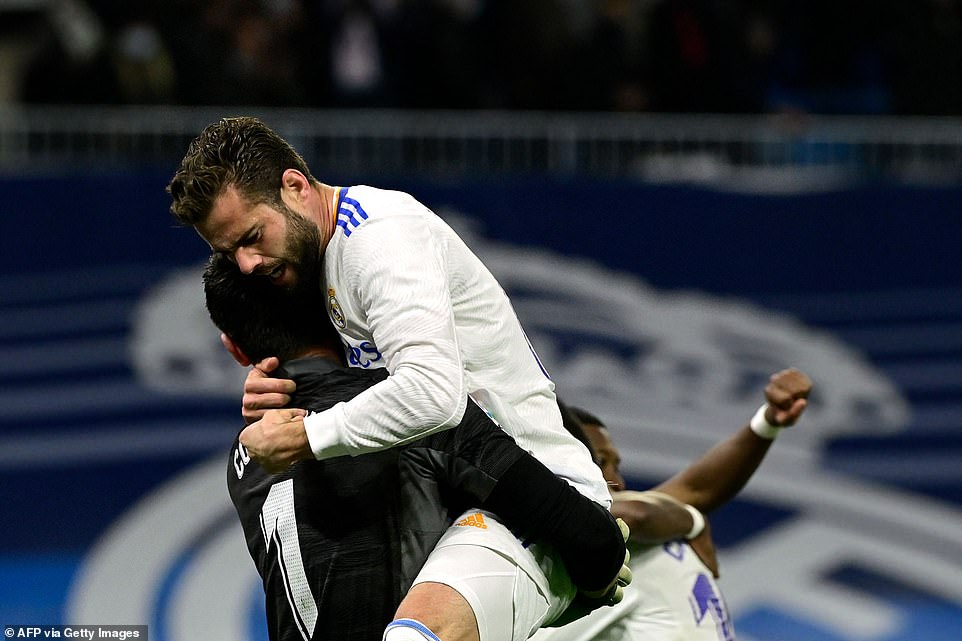 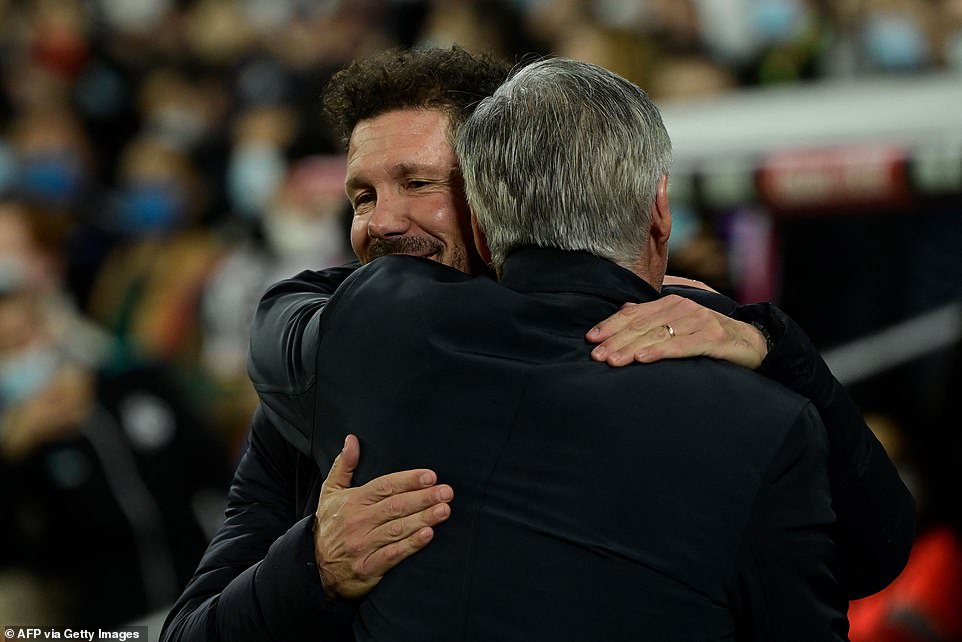 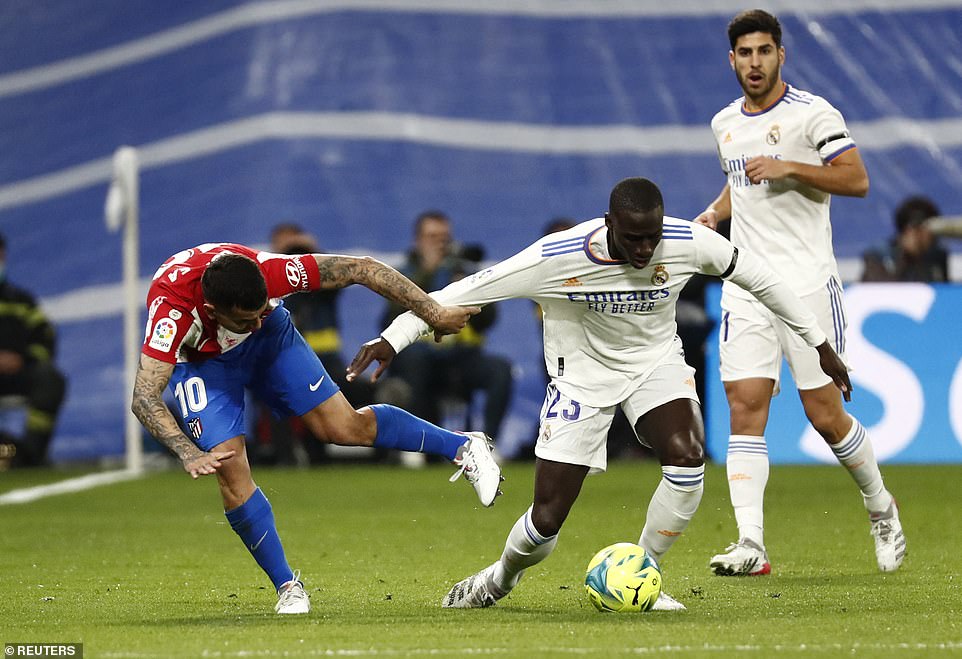 Full-blooded tackles were flying in from both sides from the very beginning, with Angel Correa (left) committing an early foul 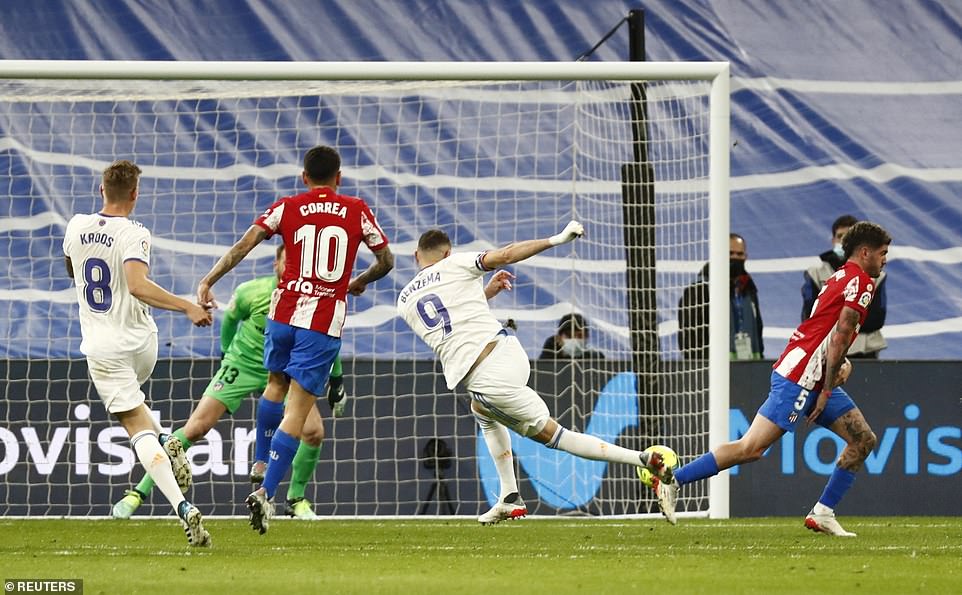 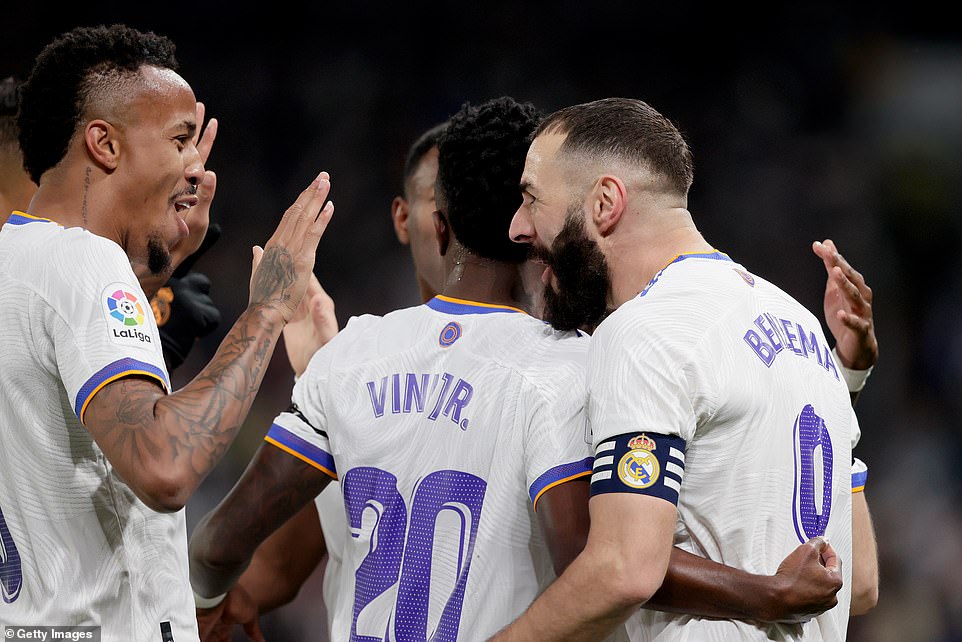 In-form Brazilian forward Vinicius Junior (centre, No 20) set up Benzema with a precise chipped cross after a counter-attack 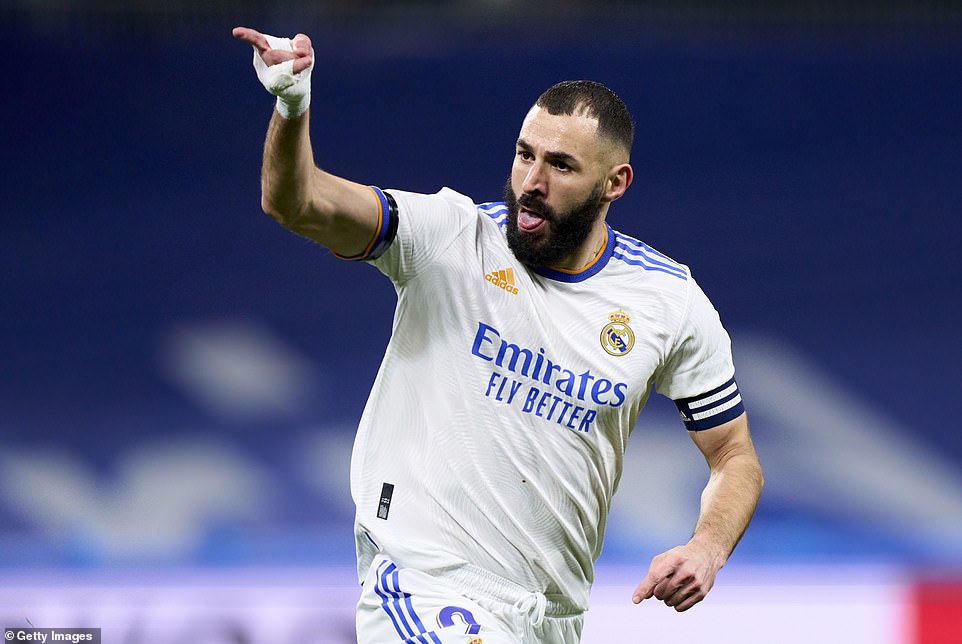 Benzema, who passed a late fitness test to play, wheeled away joyously to celebrate the opener at the Santiago Bernabeu 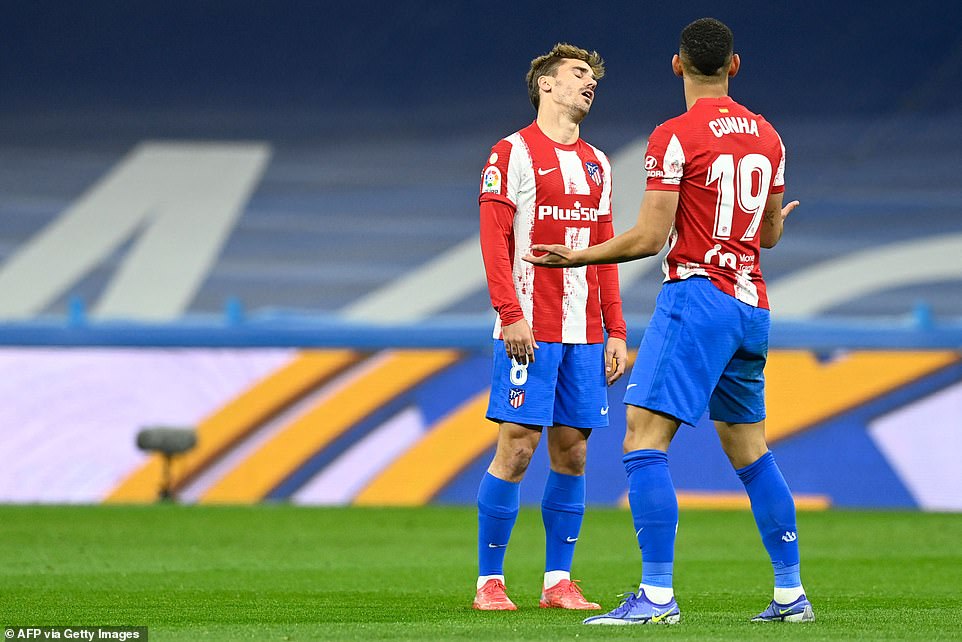 And there are two more reasons at the other end of the pitch. Karim Benzema scored his 18th goal of the season and his brilliant sidekick Vinicius managed two more assists.

Atletico started brightly but their first show of sloppiness was brutally punished.

There were 16 minutes up when Koke gave the ball away in midfield and the home side swept forward.

Luka Modric fed Casemiro who found Benzema who turned the ball out wide to Marco Asensio.

Real Madrid’s right winger found Real Madrid’s left winger Vinicius in front of him – Atletico were not expecting that.

The Brazilian had drifted across the pitch and when Asensio found him he crossed to Benzema.

Atletico had defenders back in position to deal with the danger but they were all a polite distance from Benzema who had space to volley Vinicius’ precision cross past Jan Oblak.

Madrid are never just about their centre-forward; the goalkeeper saves as many goals as Benzema scores, and Thibaut Courtois was at full-stretch to tip Antoine Griezmann’s curling free-kick away.

With Oblak saving at the other end from Vinicius’s clever chip at his near post, the score stayed at 1-0 to the break.

Benzema had only just passed fit to play the game and he was taken off as a precaution with Luka Jovic taking his place at the break. Diego Simeone made changes too.

He had not liked what he had seen in the first half and Thomas Lemar and Joao Felix replaced Yannick Carrasco and Griezmann but it made no difference to the direction the points were going.

On 57 minutes Madrid drifted forward clinically once more. This time the chain was David Alaba, Toni Kroos, Jovic and Vinicius.

All the passes were quick and precise, Asensio’s curling left-foot finish was a little more languid but just as pinpoint, beating Oblak to double Madrid’s lead. 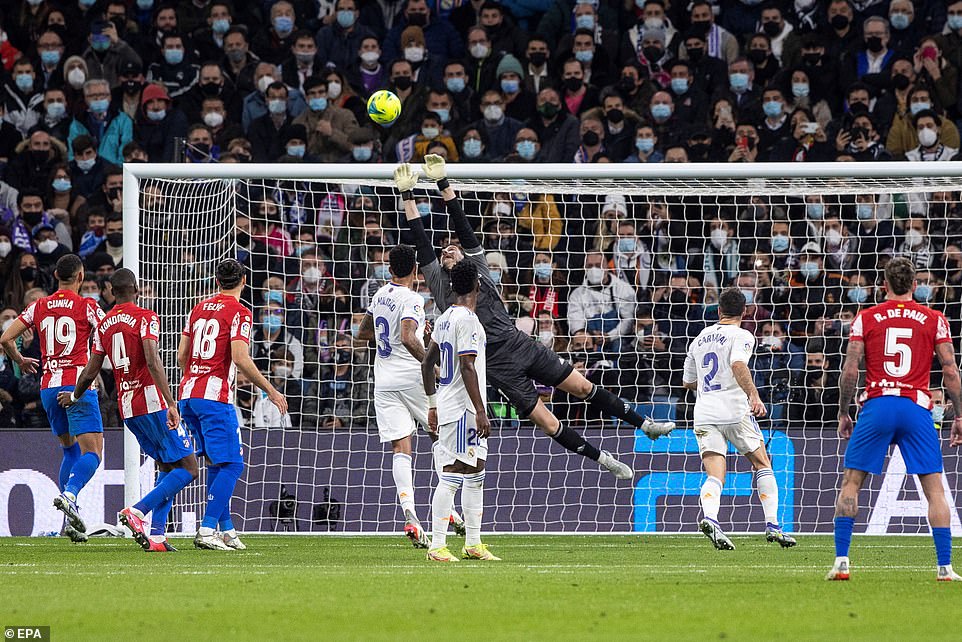 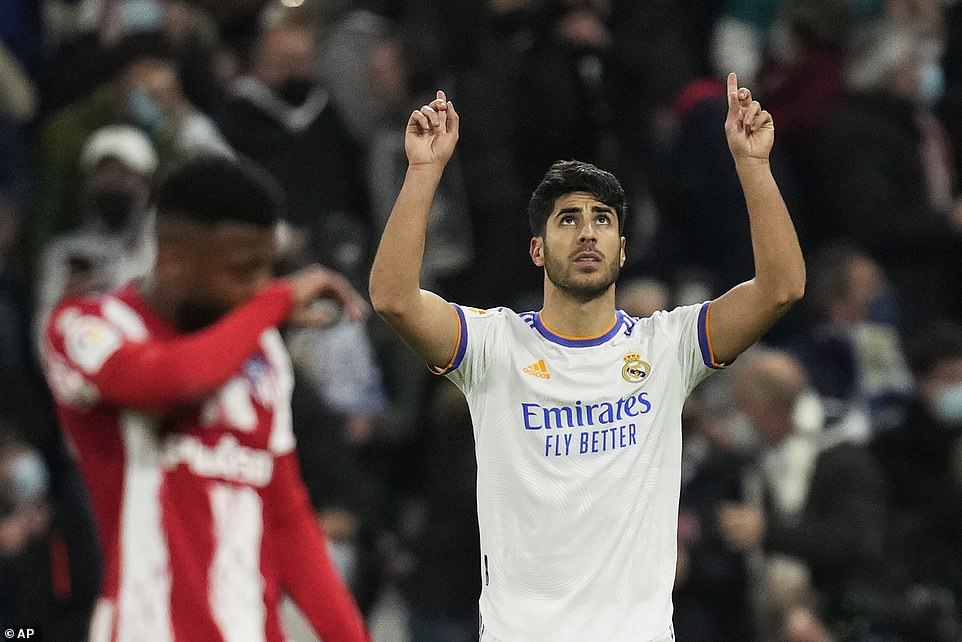 Again, Atletico started the second half brightly, but again, Madrid struck again on the counter-attack via Marco Asensio 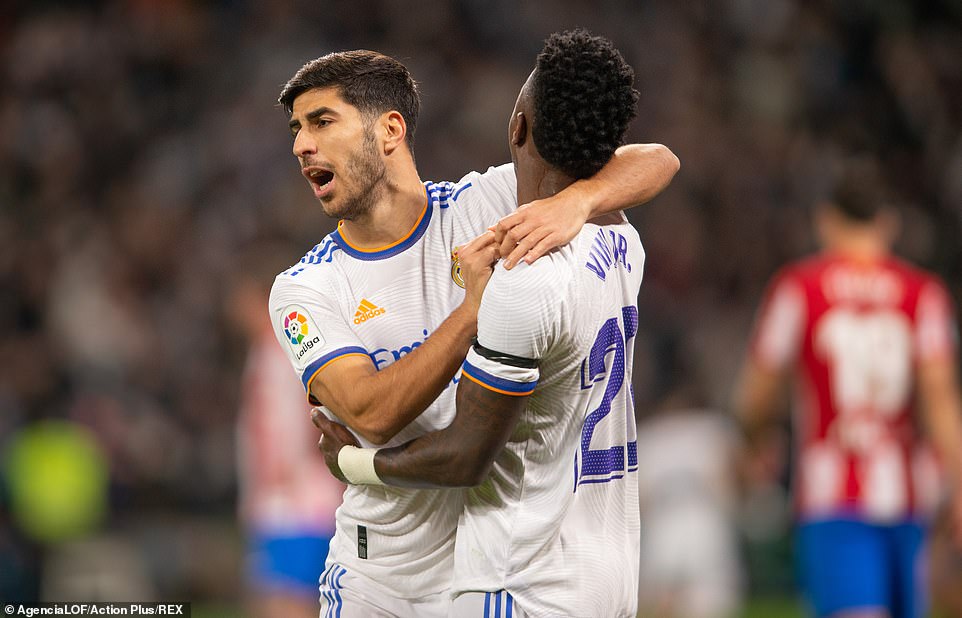 Vinicius recorded his second assist of the game, finding Asensio with a precise pass across the box, who swept the ball home 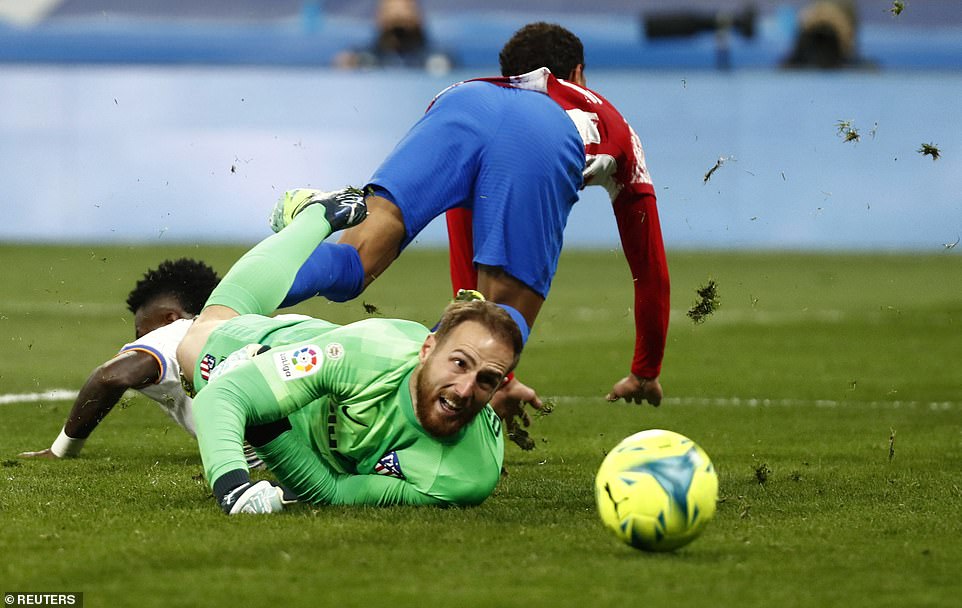 Vinicius nearly scored himself from Ferland Mendy’s cross which nutmegged Marcos Llorente, but he couldn’t get a toe on it 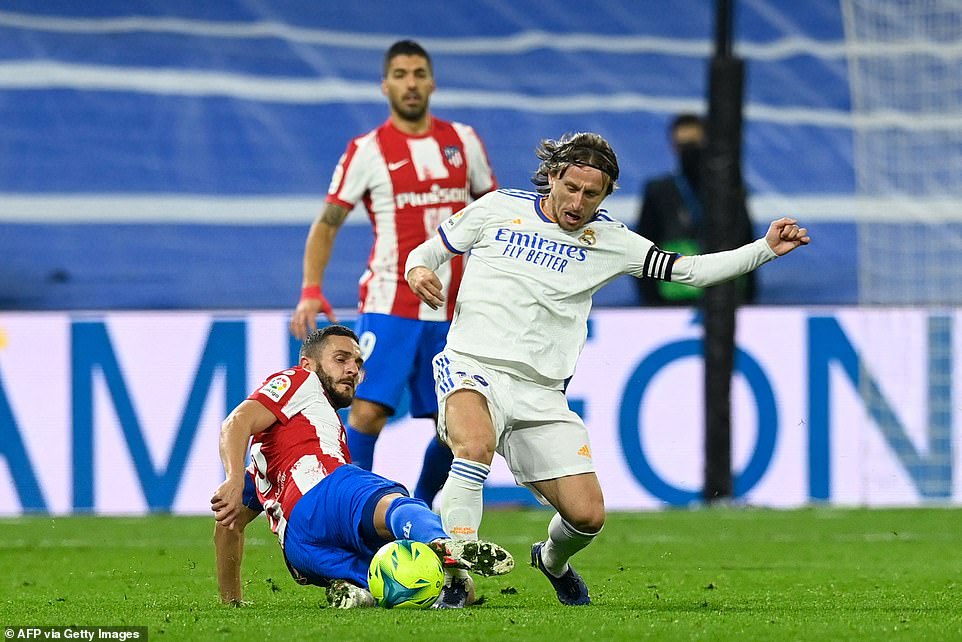 Atletico could point to two more Courtois saves for keeping them at bay. He must have seen Lemar’s free-kick late but still pushed it away. And previously he had stopped from Matheus Cunha after Felix set him up.

Cunha made way for Luis Suarez as Simeone made more changes. Renan Lodi and Hector Herrera also came on but Madrid – with Luka Modric magisterial – were not to be pegged back.

The Croatian was applauded by the Bernabeu as he nicked the ball off of Felix to stamp out another Atletico attack late on.

He remains the gold standard for midfielders in his 37th year. Real Madrid remain the team to beat in Spain.

Want to relive the action as it happened? Follow live LaLiga coverage of Real Madrid vs Atletico Madrid, including build-up, team news and scoreline, from Sportsmail‘s Max Mathews below.