Barcelona wanted a European Super League in which teams could never be relegated – a life-long pass into what would have been football’s new premier European competition. The reality they woke up to on Thursday morning is that, on merit, they no longer belong to that upper tier of club football.

Coach Xavi Hernandez knows what it’s like to play in the Europa League. He was a Barcelona player back in 2003 when they were last in the competition. They were knocked out at the quarter-final stage by Celtic after losing 1-0 in Glasgow and drawing 0-0 in the Camp Nou. That serves as a reminder that they will not find it easy stepping down a level.

Winning the competition would see them back in the Champions League next season but not many of the club’s supporters believe they can do that. Maybe things will have changed by the time European football restarts next February. 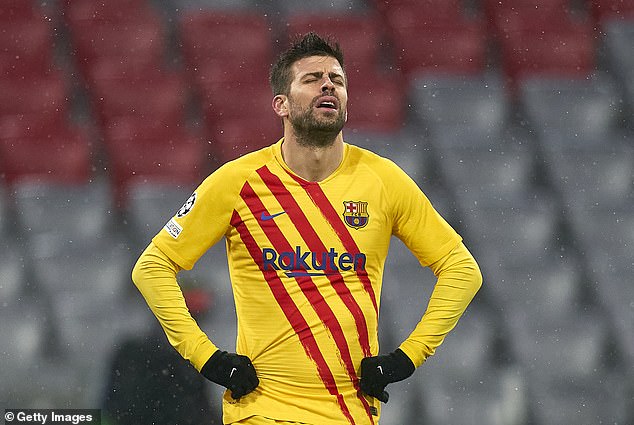 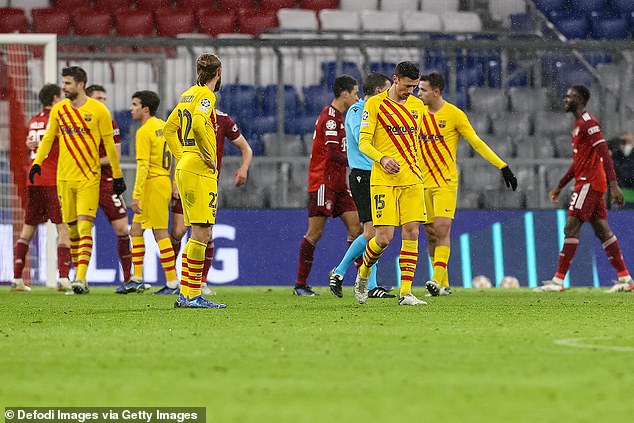 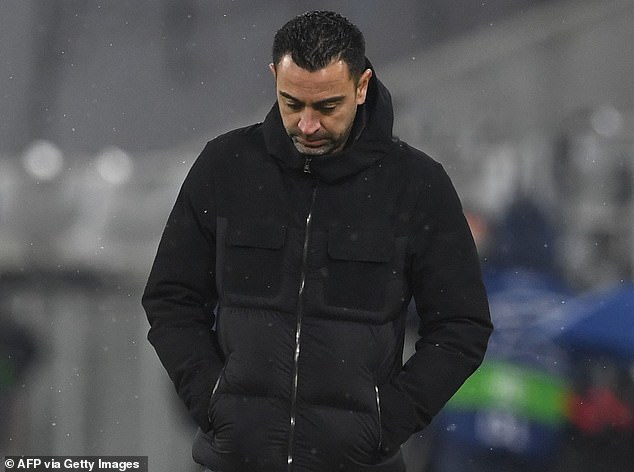 If Ansu Fati and Pedri are back, fit and flying again then their prospects will be better but they have learned over the last three months that banking on the fitness of key players carrying injuries brings few guarantees.

Next Monday’s draw will be a difficult day for them, stuck in the cheap seats after years of being front-row prime position. That’s when they will find out who they face. West Ham have won their group so will not be going to the Camp Nou in the next round. Possible rivals include Rangers, PSV, Spartak Moscow, Lazio, Braga and Dynamo Kiev.

The question of whether they will give the competition their best or see it as something beneath them is easily answered: they have a financial obligation to take it seriously.

The financial rewards from winning it are nothing compared with those given to teams who do well in the Champions League but the £12.9million or so will still be welcomed. The final is on home soil at Sevilla’s Sanchez Pizjuan Stadium and if they win it they will also have a clear passage into next season’s Champions League.

But the mood after Wednesday night’s second mauling of the season at the hands of Bayern Munich is that over two legs there are too many teams likely to get the better of them and that reviving domestic fortunes and overtaking Real Sociedad to grab fourth place behind the two big Madrid clubs and Sevilla is perhaps the more viable route. 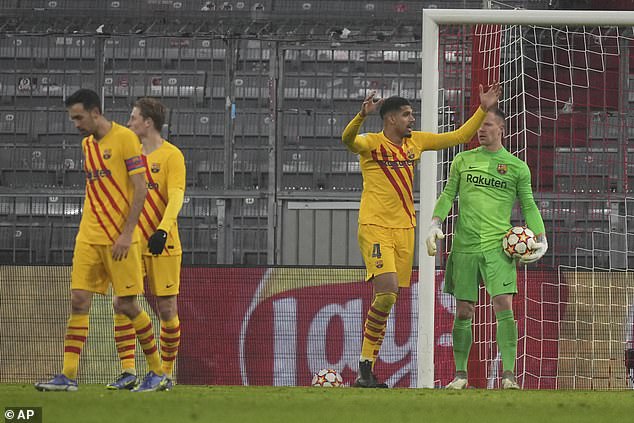 Xavi received some criticism on Wednesday night for his line-up and substitutions but the overwhelming majority can see that with the resources currently available there is little he can do to change things.

Speaking post-match, Bayern’s Thomas Muller stuck the boot in to their bewildered opponents by declaring they lack the ‘intensity’ required to thrive in modern-day elite European football.

‘Technically, they have it all, they are great players tactically and technically.

‘But they can’t cope with the intensity in top football.’ 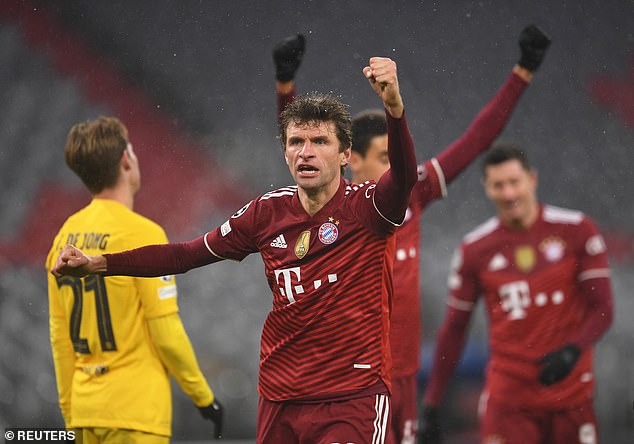 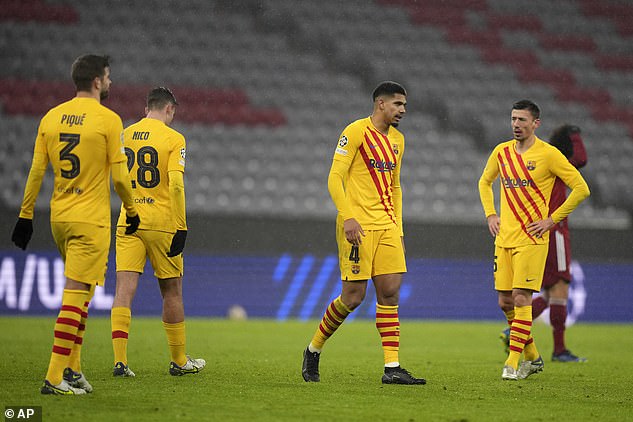 January could yet provide a way to strengthen the squad but as things stand the club are still outside of the Spanish league’s spending limits and are therefore subject to the 1:4 ratio – if they want to bring in a player on a €4m (£3.4m) salary, someone on €16m (£13.8m) needs to leave.

This is not a new problem. The high earners cannot be shifted. Even in desperate need of a win against Bayern, Philippe Coutinho did not make the starting line-up. Ousmane Dembele was picked but did little to spark the win required. The chances of either being shifted from the wage bill this January are slim.

The talk of bringing in Ferran Torres continues to make little sense. For all that the player seems keen and that his representatives may have begun negotiations, Manchester City will need to be generous in the extreme to make the move happen. 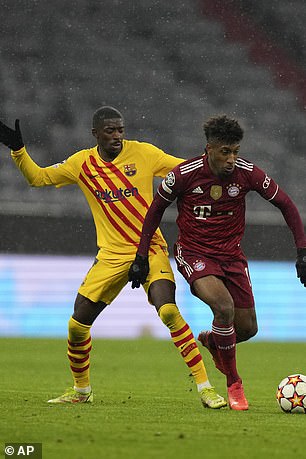 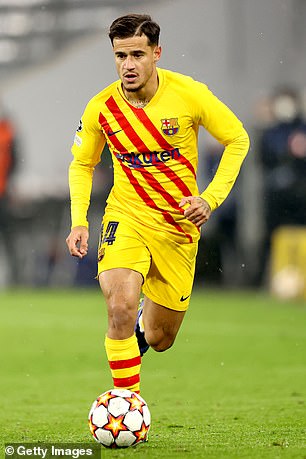 Torres has a contract until 2025. City paid an initial fee of around £21.4m for him but since then he has established himself as first choice in Luis Enrique’s Spain team. It would be puzzling charitable if they let such a young and exciting talent leave for less than £60m and that is currently £60m more than Barcelona appear to have in the transfer kitty.

Last summer they had to turn to the free-transfer market where they brought in Sergio Aguero and Memphis Depay. They may need to look for similar deals and then create some wriggle room in their salary structure.

The only thing Xavi has in his favour is the faith and confidence of president Joan Laporta – something Ronald Koeman never had. Laporta said in Xavi’s presentation: ‘We will back him, and when things go wrong we will back him even more.’

Things took a turn for the worst in the snow in Munich, but the club has little alternative but to stick with their former captain. His Europa League experience as a player will come in handy, at least. 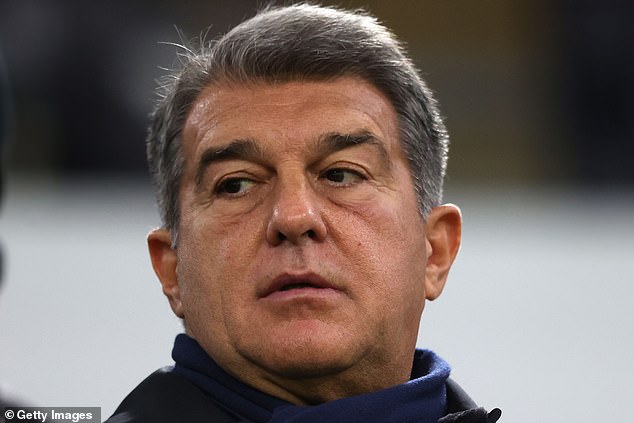 Despite Barca’s mess, their president Joan Laporta is in full support of club legend Xavi