Barcelona’s starlets have been thriving in LaLiga but Real Madrid’s young gems are nowhere to be seen… Miguel Gutierrez hasn’t featured since September and Antonio Blanco has played just 36 MINUTES, so why is there such a contrast?

Turning to academy products to enhance a squad during financial woe brought on by Covid and, in some cases, mismanagement is not a novel idea. It is just one you historically do not expect Barcelona or Real Madrid to have to resort to.

Yet the third and latest winner of France Football’s Kopa Trophy – presented to the best performing player under the age of 21 – went to Barcelona’s Pedri, while Real Madrid’s last ‘Galactico’ signing – on paper at least – was Eden Hazard in 2019.

Perhaps though it should not be all that surprising. La Masia – Barcelona’s magic well – appeared to have dried up before the latest talent off the conveyor belt surged onto the scene, while promising players are emerging from Real Madrid’s La Fabrica. 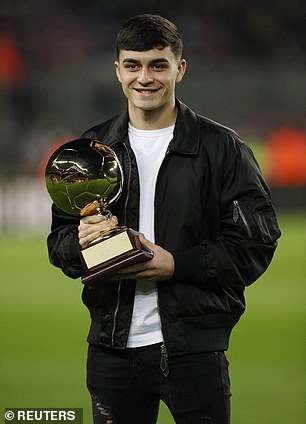 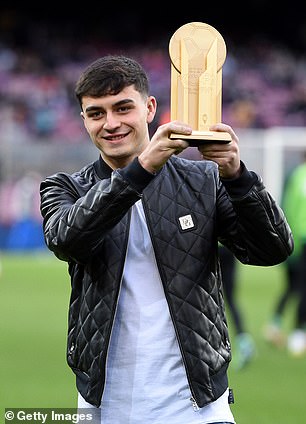 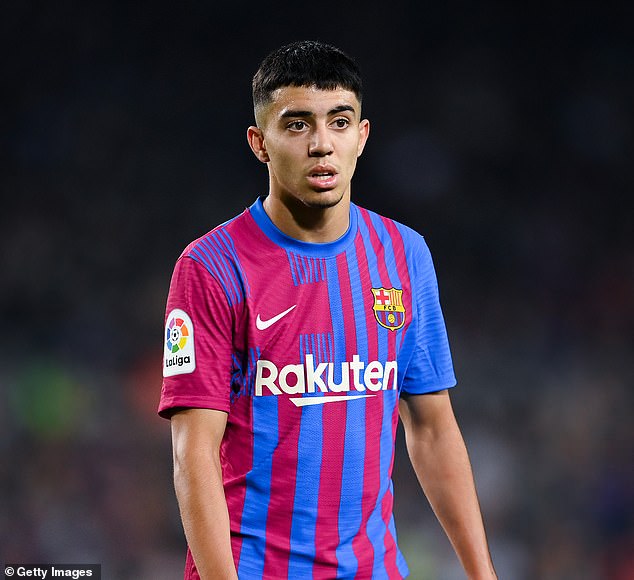 There are statistics to back up the prominence of their respective academies.

The Spanish giants have each produced 42 players who are currently at clubs across the Premier League, LaLiga, Serie A, Bundesliga and Ligue 1.

In light of this it is surprising that Real Madrid’s best youngsters – Vinicius Junior, Rodrygo and Eduardo Camavinga – are still all foreign imports.

Even at Barcelona, Pedri and Abde Ezzalzouli were signed from Las Palmas and Hercules, albeit not for the same fee or with the same reputation as a Vinicius or Camavinga. 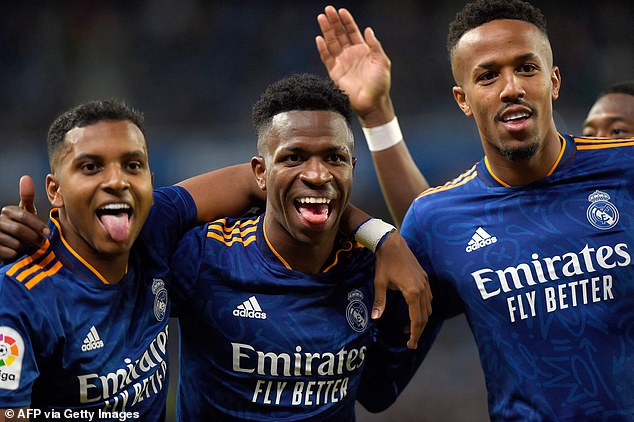 But at the same time, the Catalan giants have used 10 players aged 21 or younger this season according to Opta – most of whom have come from the academy – with only two clubs across Europe’s top five leagues having used more.

The aforementioned Pedri is joined by Nico and Gavi – who have impressed all season – while it is hoped Ansu Fati can overcome his injury issues soon to lead the line.

Sergino Dest and Eric Garcia have also seen regular first-team minutes this season while Ronald Koeman and Xavi have not been afraid to throw on the likes of Yusuf Demir, Alejandro Balde, Abde and Ilias Akhomach.

Midfielder Alvaro Sanz and goalkeeper Arnau Tenas have been in and around the squad too and could get their opportunity under Xavi, while 22-year-old Barcelona B  Ferran Jutlga has figured twice since making his first-team debut against Osasuna.

It all points to signs of a revival under Albert Capellas, the former Barcelona B coach now overseeing La Masia after being drafted back in to the set-up by president Joan Laporta in the summer. 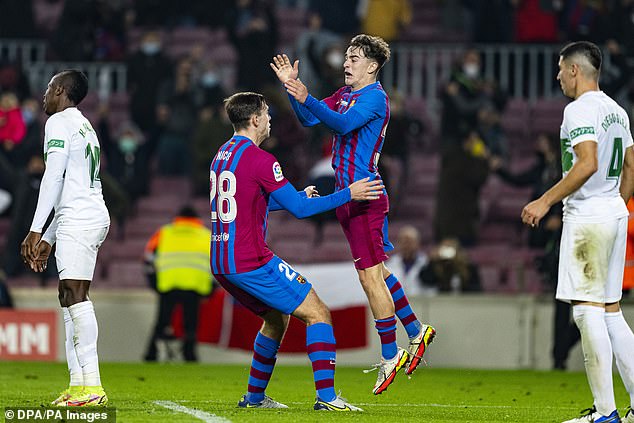 While winning games with these youngsters will be of primary concern, developing such a strong generation of youngsters remains the long-term goal.

‘They are a very, very good generation but a very young one so we have to help them,’ Xavi said at his unveiling.

That may be true – especially as they are more than likely to form the spine of the side for the next decade – but at least several have been exposed to the top level.

By comparison, Real Madrid have handed just two academy graduates a debut this term – Sergio Santos and Peter Gonzalez – while Atletico Madrid have handed minutes to just one new academy star in Carlos Martin in 2021-22. And particularly in the case of the former, it is not as if there are a lack of youngsters waiting to seize their chance.

Left-back Miguel Gutierrez very much leads that queue, having impressed for Real Madrid Castilla and in the handful of LaLiga appearances the 20-year-old made under Zinedine Zidane at the back end of last season. 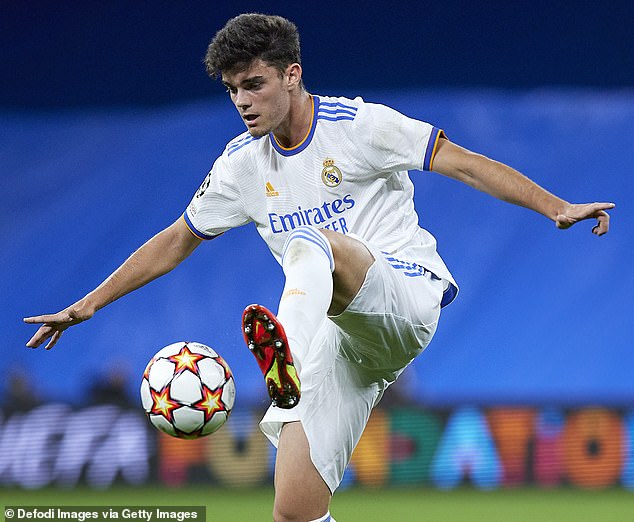 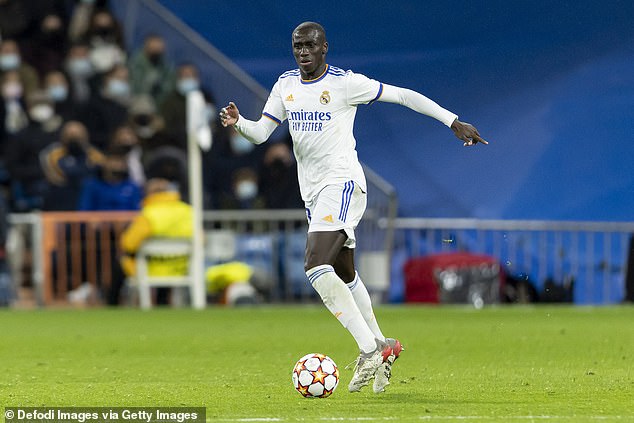 Midfielder Antonio Blanco is another graduate who even has a senior Spain cap to his name. But he has seen just 36 minutes of first-team action this season, while Gutierrez has not figured since the shock home defeat by Sheriff in late September.

They will no doubt be concerned with the lack of LaLiga minutes during a critical stage of their development. A look at their current team-mates Dani Ceballos and Isco show just how careers can stall after early promise.

But their own careers could fail to even take flight if their current omission continues. So are their meaningful breakthroughs likely any time soon?

Well, boss Carlo Ancelotti does not seemingly see any need to add verve and energy to his squad from the youth set-up. The Italian said in late November: ‘My dressing room is full of quality, personality and harmony. There’s a lot of youth and enthusiasm within the group.’

Given his side’s recent performances, it is difficult to dispute that point. Toni Kroos, 31, and in particular Luka Modric, 36, are still running games in central midfield – not least the Madrid derby this month – while Casemiro has come back into form after looking tired at the start of the season.

However, an equally undisputed starter is left-back Ferland Mendy, who has been given the nod in all but one of the 11 LaLiga games and all of their Champions League games since returning from injury. 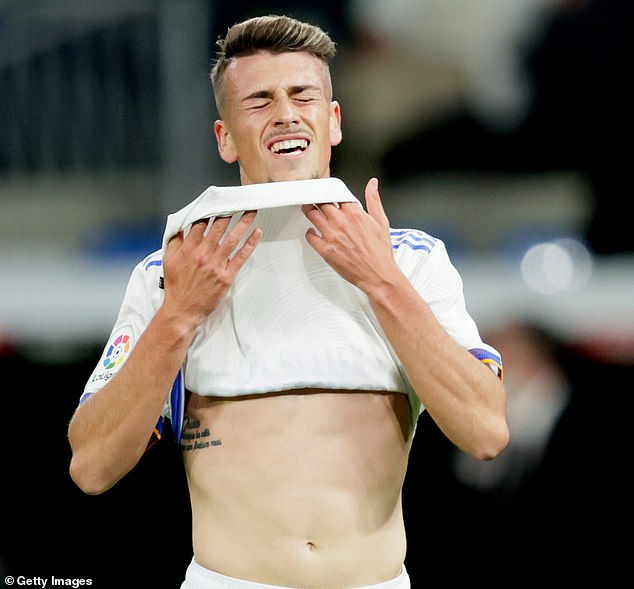 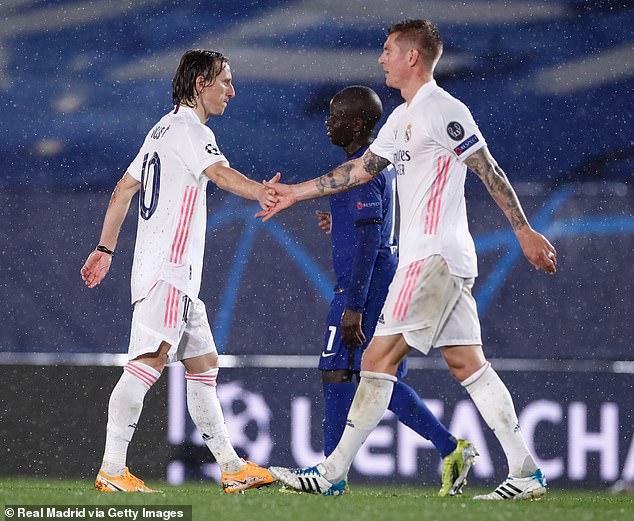 With him in the line-up, they have lost just one LaLiga game, that being against Levante back on January 21, with the Frenchman registering 43 wins and 12 draws in the rest of the matches he’s started.

He is therefore a critical figure indeed, and anyone who has watched Real this season knows Ancelotti does not need an excuse to keep playing the same XI.

That was evident during their hectic schedule before Christmas, where Ancelotti’s only real dilemma appeared to be whether Rodrygo or Marco Asensio started on the right of the attacking three.

Moreover, the Italian shunned Gutierrez earlier in the season, preferring to use David Alaba and the versatile Nacho Fernandez when both Mendy and Marcelo were absent through injury.

Gutierrez’s chances became more bleak – despite his attacking prowess – when he ultimately failed to impress Ancelotti when he did get his chance, following a couple of the defensive errors in the 2-1 defeat by Moldovan champions Sheriff.

In the build-up to Sheriff’s first goal, Gutierrez failed to converge centrally when Alaba had stepped up to press, and he then failed to race back and prevent Jasurbek Yakshiboev’s free header. Hauled off after 66 mins for Toni Kroos during that game, he has not been seen since. 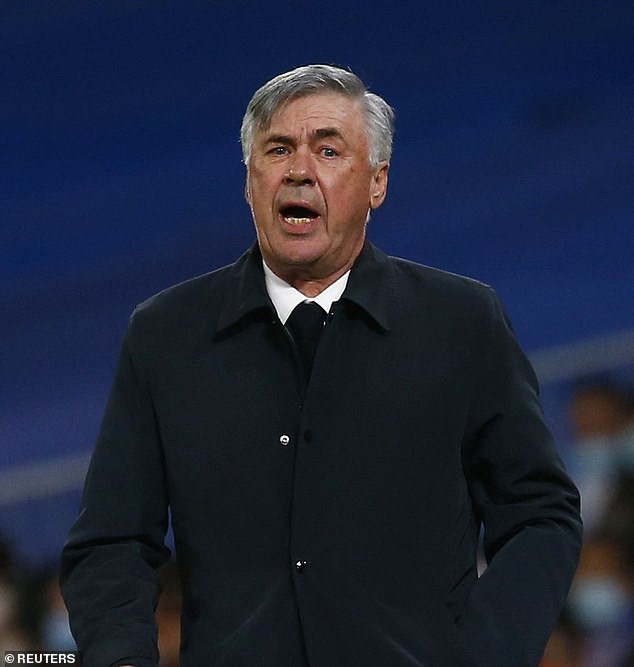 Carlo Ancelotti has not had to revert to youth this season, while Barcelona have had no choice

It must be added that he was not on the field for Sheriff’s brilliant winner, and three LaLiga games – in which he claimed an assist in a 5-2 win against Celta – and a European appearance hints at a club desire for him to stake his claim. But Ancelotti did not want to and, ultimately, has not had to show patience with him.

On the other hand, Barcelona – unlike their Clasico rivals – have no alternative but to turn to youth. President Joan Laporta said in August the cause of Lionel Messi leaving the club was a debt of £1.15billion run up by predecessor Josep Bartomeu.

In short, Barcelona still have no money, with reports they may have just £8.5million (€10m) of their own to spend in January, although a €500bn loan by investment bank Goldman Sachs is helping to finance the arrival of Ferran Torres.

However, LaLiga rules dictate that while need to reduce their wage bill remains a top priority.

That spells bad news for a side that is desperately lacking in experience in some critical areas. There is no more Messi, Ivan Rakitic, Luis Suarez or even Antoine Griezmann to guide an extremely youthful side who are bound to make errors learning on the job, through rough patches in matches. All that responsibility now falls on Sergio Busquets and Gerard Pique, whose powers are waning.

For all the good Gavi and Nico – who combined to score in this month’s draw at Osasuna – have done this season, they have naturally made mistakes too, albeit few and far between. But when they have, Koeman and now Xavi have had no option but to persist with them. 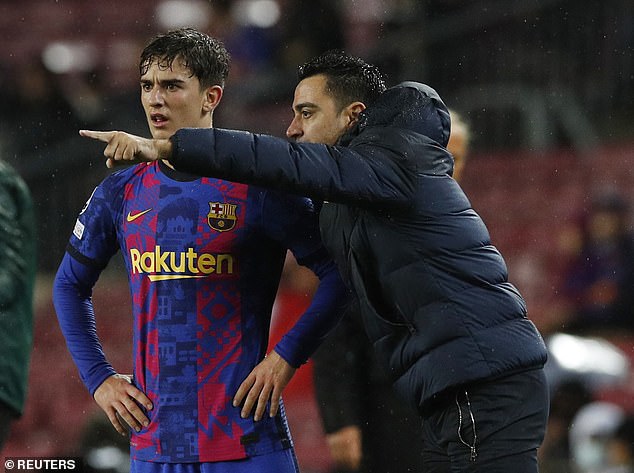 On the other hand, as we have seen with Gutierrez this term, it is debatable whether Ancelotti would be so forgiving with Nico and Gavi’s mistakes were they at Madrid instead.

However, amid the dramatic overhaul at Barcelona and the largely ‘Galactico-less’ Madrid, the ultimate long-term approaches and goals when it comes to their respective youth academies remain the same as they have been for many years.

Madrid appear to still see youngsters – whether imported or products of La Fabrica –  as nothing more than another way to add to their coffers.

Achraf Hakimi is perhaps the most high-profile example, a player who looked like the natural successor to the ageing Dani Carvajal, but who the club ultimately sold because £36m from Inter Milan was seemingly too good an offer to turn down.

Martin Odegaard – bought as a 16-year-old from Norway and who many believed would be the next midfield magician at the Bernabeu – was sold for £30m to Arsenal in the summer. 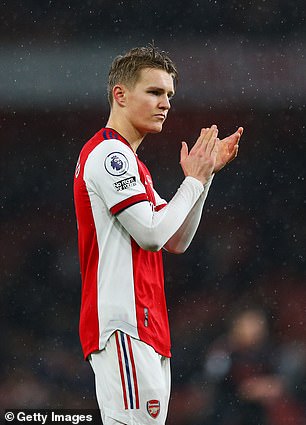 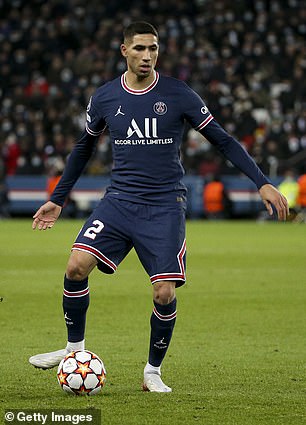 Sergio Reguilon was – albeit with a buy-back clause – sold to Tottenham in 2020, and even Carvajal himself spent a year at Bayer Leverkusen before being re-signed. Raul de Tomas never got his chance either but is now a Spain international.

Current loanees Takefusa Kubo, 20, – sent on loan for the third straight season – and Reinier Jesus, 19, despite his struggles at Borussia Dortmund, could also head down the same path.

On the flip side, Barcelona’s youth policy is geared towards producing players for their first team, rather than the transfer market, a system which has only been enhanced by Xavi’s arrival.

While there is little debate as to who has the edge over who right now – LaLiga leaders Madrid currently sit 18 points above Barcelona – the youth policy that is more successful may just provide one of these historic Spanish clubs with the advantage over the other in the long run.