Arsenal set up a Carabao Cup semi-final second-leg shootout with Liverpool in London after holding out for a 0-0 draw in the first leg at Anfield.

Liverpool dominated the first half as the Gunners went down to 10 men following Granit Xhaka’s red card. However, they could not get the breakthrough.

The second half was much the same. Despite the draw, Arsenal will be the happier of the two teams. They held strong for 75 minutes and more and even threatened at times at the other end.

Liverpool, though, could not find a way through and missed a glorious chance to take the advantage in the final minutes.

There were further worrying moments for the Gunners amid the constant pressure.

Aaron Ramsdale kicked the ball straight at Jordan Henderson and Gabriel’s back-pass was much too powerful, handing the hosts back-to-back corners.

But Granit Xhaka produced the worst first-half moment for Arsenal. Diogo Jota chased a ball over the top and Gunners midfielder Xhaka – the last man – brought him down with a high foot into his chest.

Referee Michael Oliver went straight to his back pocket for a red card. 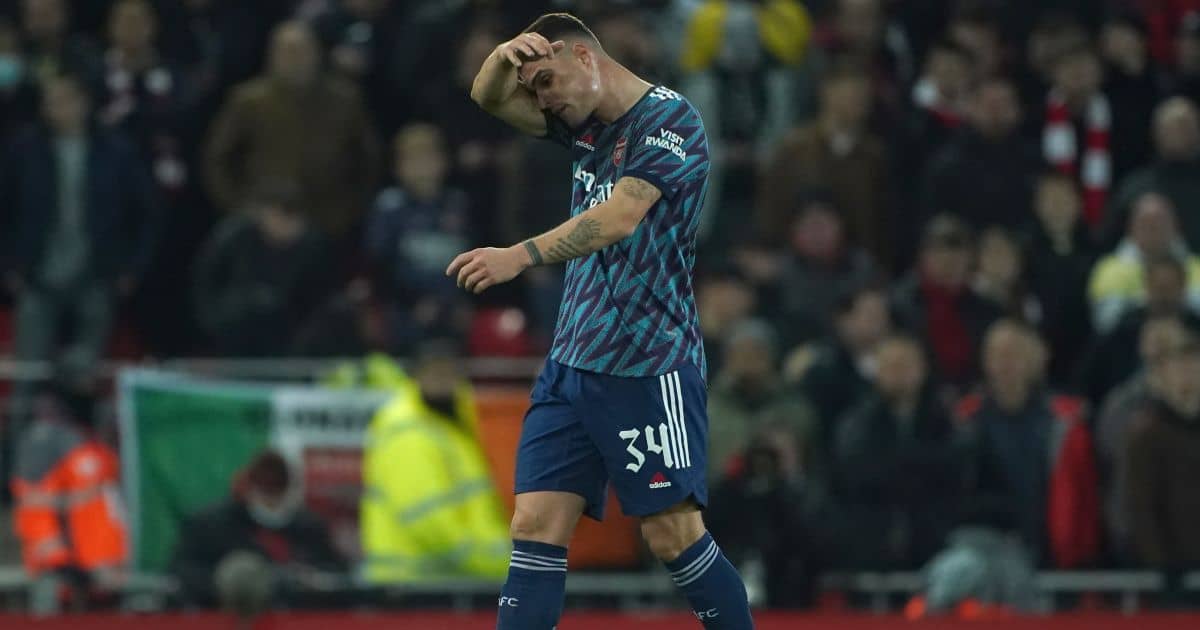 Liverpool continued to dominate possession, but their final product was poor, including from several more corners.

As a result, 10-man Arsenal stood firm and defended well. Up the other end, Bukayo Saka was lively down the right. Nevertheless, they ended the half with only one shot, which was not on target.

The second half started exactly like the first when Minamino’s long run saw him fire in a cross which almost went in.

But also like in the first half, Arsenal stood firm as Liverpool struggled to find a way through. Jurgen Klopp’s men had no luck going through the middle and went out wide with Minamino and Jota.

The Reds’ first real chance, though, came from an Arsenal attack. Fabinho got it forward and Robertson slid in Minamino, who shot across goal from the left and just wide.

Nevertheless, Arsenal were still a threat. Tierney’s cross went over Virgil van Dijk and found Saka, who took a touch and shot inside the area but was smothered by Alisson.

Liverpool largely stayed on top, but they could not find a winner before the end of the 90 minutes.

Jordan Henderson and substitute Alex Oxlade-Chamberlain blazed over as the Reds looked to shoot from long range to find a winner.

Then, Ramsdale got nowhere near a cross and instead parried it into the area, where Minamino was waiting. However, the Japan international also blazed over – this time missing a gaping goal.

The result means that it is all to play for in the second leg at the Emirates Stadium.

Arsenal will be buoyed by their defensive resolve, but Liverpool will feel aggrieved that they did not make their dominance pay.

See also  Verstappen responds to Hamilton: I slowed down to let him pass, but he didn't want to