First staged as long ago as 1989, the Dubai Desert Classic was the first event to be staged on the Arabian Peninsula. There was no event in 1991 so this is the 33rd edition.

The Dubai Desert Classic is the second of five Rolex Series events.

Apart from the 1999 and 2000 renewals, the Majlis course, designed by Karl Litten and opened in 1988, has hosted the event since its inception.

The fairways are fairly generous and the rough isn’t often brutal.

The front nine ends with three tough holes in four – the sixth, eighth and ninth – and it’s the stronger of the two nines by almost two strokes.

The front nine last year, which has a par of 35, averaged almost a stroke over-par at 35.97 whereas the back nine, which contains three par fives, only averaged 36.18 – almost a stroke below its par of 37. 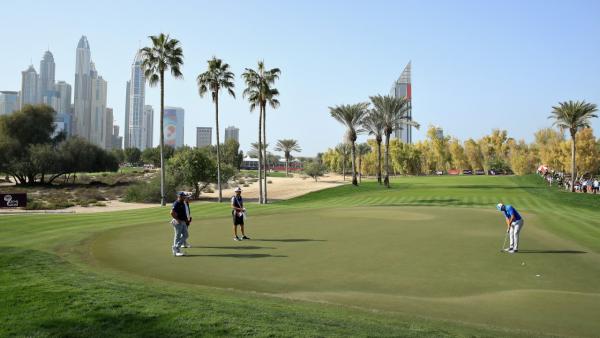 The Majlis is a typically exposed desert track so the wind is very often a factor and if it get up, the scoring is much harder than in calm conditions.

As an indication of how different the course plays in the wind, the 2020 winner, Lucas Herbert, won in only nine-under-par (the highest ever tournament aggregate score) but 12 months earlier, Bryson DeChambeau got to -24, which was the event’s record low score.

The greens, which are usually set at around 11.5 on the stimpmeter, have been completely renovated since we were last here and this is what Mohammed Buamim, the Emirates club’s manager, told Gulf News during the renovation last year.

“It was discovered that the greens, in particular, were not in the condition we would like them to be and therefore decided to have them rebuilt.

“We have also taken this opportunity to return them to their original size and shape, which means that they will get bigger and by that open up more choices for interesting pin positions. I’m confident that it will improve the course significantly.”

The new putting surfaces are Bermuda TifEagle and the whole course is laid to Bermuda grass. Water in play on ten holes.

Live on Sky Sports all four days, starting at 4:00 on Thursday.

What Will it Take to Win the Dubai Desert Classic?

Although last year’s winner, Paul Casey, only ranked 24th for Driving Distance, length off the tee has been key for years here and big hitters tend to shine.

The 2020 winner, Lucas Herbert, ranked ninth for DD and Dean Burmester and Adri Arnaus, who finished tied for third, ranked first and sixth for DD.

Monstrously long-hitter, Bryson DeChambeau, only ranked 26th for DD, when he won here three years ago and the six winners before him ranked 14th, fourth, 10th and first, fifth and fourth.

It certainly helps to hit it long, but you don’t have to hit it especially straight. Garcia ranked fourth for Driving Accuracy when he took the title five years ago and the runner-up, Henrik Stenson, ranked first but that was really unusual. DA has been an almost an irrelevant stat, with no other winner ever ranking any better than 15th for fairways found. Casey ranked 17th 12 months ago and the average DA ranking of the last ten victors is just 37.1.

Casey ranked fourth for Greens In Regulation, three of the top-five ranked sixth or better last year, and 12 of the last 16 winners have ranked inside the top-five for that stat. 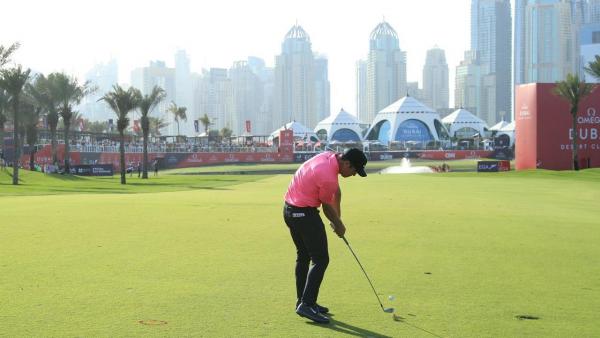 The last two winners have only ranked 22nd and 21st for Putting Average, and 41st and 14th for Strokes Gained Putting but that could have something to do with the deterioration of the old greens as up until 2020, putting had been absolutely key.

DeChambeau ranked second for PA three years ago, Li ranked first in 2018 and so did Danny Willett when he won here in 2016. Even with the high rankings of the last two winners, the average P.A ranking for the last ten winners is just 9.4.

It’s difficult to know how the new surfaces will perform but concentrating on strong putters that hit it a long way could be the way to go.

Is There an Angle In?

There are four venues that seem to correlate nicely with the Emirates – Dom Pedro Victoria, Doha, the Gary Player Country Club and the Abu Dhabi Golf Club.

Dom Pedro Victoria hosts the Portugal Masters and there’s plenty of evidence to suggest that’s a tournament that correlates very nicely with this one.

Casey has never played in the Portugal Masters but the 2020 winner, Herbert, finished second in Portugal in 2018, and Sergio Garcia, who won here five years ago, finished seventh in his one and only appearance there in the same year.

The 2016 winner, Danny Willett, has finished inside the top-seven there three times and the three men to win this event before Rory McIlroy in 2015 – Alvaro Quiros, Rafa Cabrera-Bello and Stephen Gallacher (who this event back-to-back) – all have a top-three finish there…

Having been postponed until later in the spring due to covid issues, the Qatar Masters, which was due to be played in a fortnight’s time, may not go ahead this year and that will be a shame as it was due to return to Doha, a venue last used in 2019 but it’s a venue that’s well worth close inspection with regards to this event.

Christiaan Bezuidenhout, who was beaten by Herbert in extra time two years ago, finished second there in 2019 and as many as five players have won here and at Doha – Ernie Els, Henrik Stenson, Thomas Bjorn, and the two Spaniards, Quiros and Sergio.

Form in the desert holds up well so last week’s result at the Yas Links could provide clues and form at the old Abu Dhabi venue held up well here too. Casey has won there twice, and at the halfway stage of last year’s renewal, the last to be staged at the Abu Dhabi Golf Club, four of the top-six had previously won this event.

And finally, in addition to the various course correlations, links form is well worth looking at too given six of the last 15 players to win this title have also won an Open Championship.

The course is fairly wind-exposed and it tends to get faster and harder as the week wares on which explains why links exponents do so well here.

As highlighted above in the course notes, how windy it is here is a determining factor as to how hard the course plays and it also has a huge bearing on how the tournament pans out. The 2020 winner, Herbert, won with the highest winning total (-9) and the previous record high had been -11 (Alvaro Quiros in 2011) and it’s no coincidence that those are the only two editions in which the winners have come from off the pace…

The tricky, blustery conditions caused mayhem two ago and although they’d been up with the pace earlier in the tournament, both the playoff protagonists, Herbert and Bezuidenhout, had trailed by six with a round to go yet they finished two strokes clear of the remainder having both traded at 1000.0 during the final round!

Alvaro Quiros’ victory here in 2011 was remarkable for a number of reasons. He made three eagles, including a two on the par four second hole, and a hole-in-one during the final round, and he also made a pair of triple-bogeys, one on day one, at the par five 10th, and one at the eighth hole on day four. But the most remarkable thing about his win was how far off the pace he had been before winning. He trailed by eight strokes after both rounds one and two and up until 2020 that was the furthest any winner had trailed by a country mile.

With friendly conditions, it was business as usual last year and Casey was inside the top-six and three behind after round one and two before taking up the running with a round to go.

Mark O’Meara, who was six adrift in 2004 and Quiros, who trailed by eight in 2011, are the only winners this century that weren’t within four of the lead after round one. Herbert had sat third and two off the lead before dropping to 11th and four back at halfway two years ago and he’s just the third tournament winner to be outside the top-ten at the halfway stage.

Quiros 11 years ago and Robert-Jan Derksen, the shock 2003 champ, who sat tied for 20th and five off the lead, are the other two. Every other course winner here has been inside the top-six places at halfway so unless the wind really blows, this is not a place to try and play catch-up.

DeChambeau sat second after round one in 2019, just one behind the early pacesetter, Matthew Fitzpatrick, but he led all the way after that and the 2017 winner, Garcia, was the sixth player to win wire-to-wire.

Ashun Wu in 2020 is the only 54-hole leader to be beaten in the last eight years and in 21 of the 32 editions staged to date, the third round leader has gone on to win.

Rory McIlroy is the clear favourite for the week, off the back of a record that reads eight straight course top 10 finishes, including victories in 2009 and 2015.

It’s worth bearing in mind two factors, however. The first is a weather forecast that suggests more high wind, this time from Friday through Sunday. Not the Northern Irishman’s ideal conditions.

In those last eight starts on the Majlis course he’s had three solo first round leads and one shared; he’s always ended that first lap tied sixth or better. As mentioned last week, McIlroy is not as prolific as the market suggests so a back to lay might make sense.

Viktor Hovland is the second favourite, returning a far more accomplished golfer than when tied 23rd in his only previous course start in 2020. He’s also now a regular winner.

It’s interesting he’s rated a more likely champion than Collin Morikawa. That’s explained by the American’s tied 68th debut last year when he seemed to find more difficulty with the course every time he played it, carding 71-73-76-75.

Last week’s pipe opener in Abu Dhabi will have knocked off the rust as well as giving him an opportunity to familiarise himself further with his new clubs. His putter was the only old club in the bag last week.

The Irishman has led or co-led after the opening round in four of his last eight visits and he’ll make for a great back-to-lay vehicle.

Looking a bit further down the list, I quite like South Africa’s Justin Harding who ticks a number of correlating form boxes. He won the Qatar Masters at Doha on the last occasion the tournament was played there in 2019 and he traded at long odds-on at the South African Open in December when he led by four with a round to go at the Gary Player Country Club before finishing a disappointing sixth.

Harding has course form figures here reading 7-37-27 but that doesn’t really tell the whole story. He sat third and just two off the lead 12 months ago before finishing 27th and he might prove to be a lively outsider after a decent effort in Abu Dhabi last week.