Manchester United failed to finish a spirited Southampton off, as the sides shared an end-to-end 1-1 Premier League draw at Old Trafford.

The Red Devils dominated most of the first half and broke the deadlock with Jadon Sancho’s first top-flight goal on United’s home soil.

However, Southampton got back to it, ending the first half on top. What’s more, they equalised three minutes after the break through Che Adams’ fine finish off the post.

From there, neither side sat back and instead searched for a winner. But the teams shared the spoils in the end in another mis-step for Man Utd in their search for a top-four finish.

What’s more, the result is the fourth time in six games that United have dropped points from a winning position.

As for who stood out for Ralf Rangnick‘s hosts, goalkeeper David de Gea and centre-back Harry Maguire were solid. However, Cristiano Ronaldo failed to truly stamp his mark in attack.

As for Southampton, Armando Broja and Adams bullied United in the second half, while Fraser Forster and substitute Jack Stephens were also impressive.

Mark Hughes, Gianfranco Zola and other former Premier League managers rotting away on the shelf

David de Gea: Made two decent saves towards the end of the first half, with a poor free-kick straight to Oriel Romeu his other highlight. Quieter after the break. 7.

Diogo Dalot: Fantastic long and short-range passing in the first half linking up with Rashford and Ronaldo in the first 45 minutes. Defending and decision-making could have been better throughout, though, especially in attack. 5.

Raphael Varane: Made a few good clearances from Southampton balls over the top. Could have defended Mohamed Elyounoussi better before his pass got Adams in for his goal. 5.

Harry Maguire: Quiet in the first half but blocked a cross when he had to get involved. Better in the second half, defending Southampton pressure and having two shots saved. 7.

Luke Shaw: Got up and down the pitch well, including when blocking a shot before instantly setting Sancho away with a pass down the left flank. Involved down the left of attack again in the second half, but struggled to make his mark defending Broja. 6.

Paul Pogba: Not directly involved in many attacks for United, but set up a host of moves with impressive tackling and passing. Although, his headed flick set up Southampton’s best first-half chance. 6. 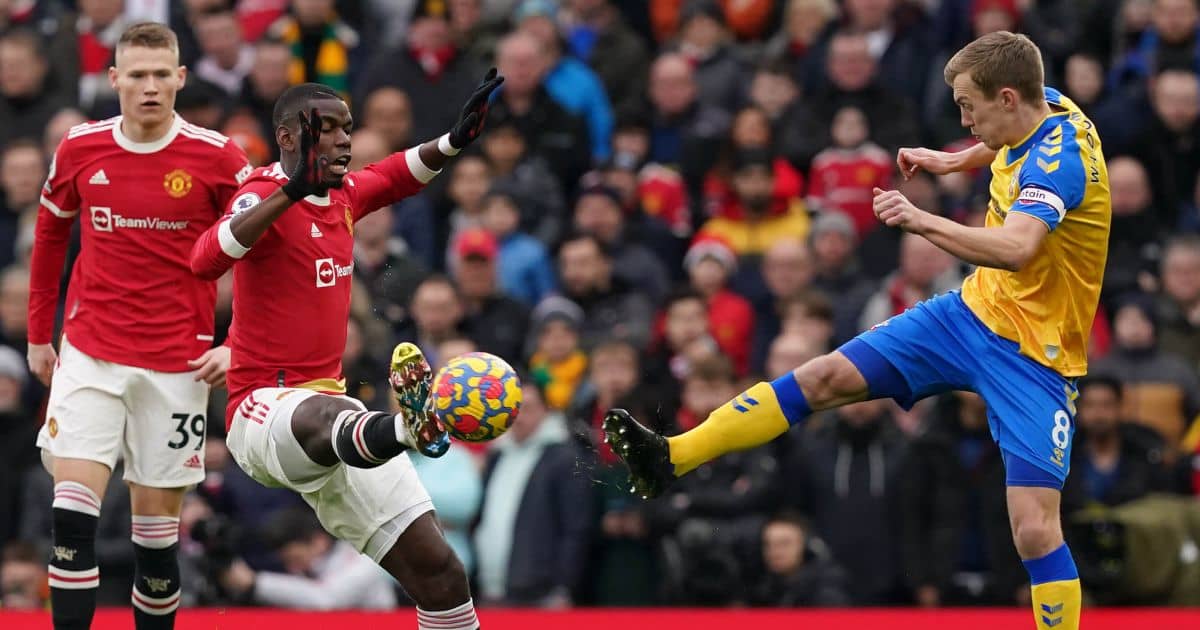 Scott McTominay: Made several good first-half interceptions either side of a yellow card for two quickfire fouls. More solid in the second half. 6.

Marcus Rashford: Struggled with his early crossing but his ball for Sancho’s opener was on the money. Booked in the first half and his final product was again poor after the break. 6.

Bruno Fernandes: Impressive running in behind then passing to team-mates in behind. Indeed, his pass helped set Sancho’s opener up. Helped United get forward from there, but could not find an assist or goal. 6. 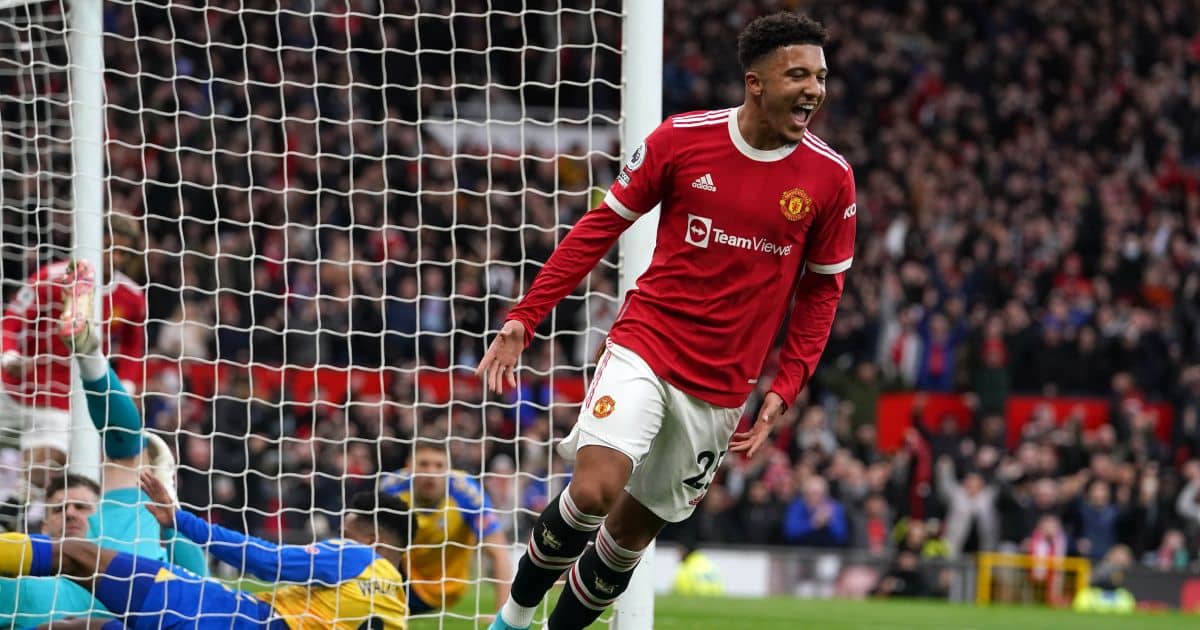 Jadon Sancho: Lively throughout but struggled with his final product early on and should have set Ronaldo up for a chance. However, he took his finish well at the back post. Made a few more good runs after the break but could not open Southampton up again. 7.

Cristiano Ronaldo: Had a weak shot saved off the line early on and struggled to affect the first half from there on. Had a shot saved and a goal ruled out for offside as he failed to truly stamp his mark on proceedings. 5.

Anthony Elanga (on for McTominay, 75): Enjoyed a few touches but largely snuffed out by Southampton’s defenders. 4.

Jesse Lingard (on for Rashford, 82): Tried and ultimately failed to get United going in the final stages of the match. 5.

Fraser Forster: Good save early on from Sancho but couldn’t keep out his tap-in. Made several more great saves to keep Man Utd at bay. 8.

Kyle Walker-Peters: Struggled to deal with Sancho down the right flank and failed when sliding in to stop the opening goal. Enjoyed getting forward more in the second half. 5.

Jan Bednarek: Southampton’s most effective defender before half time with several blocks and interceptions. 5.

Mohammed Salisu: Missed a tackle on Rashford which led to Sancho’s opener, but caused a few problems with his passing and long throws. Enjoyed a mixed defending record in the second half. 5. 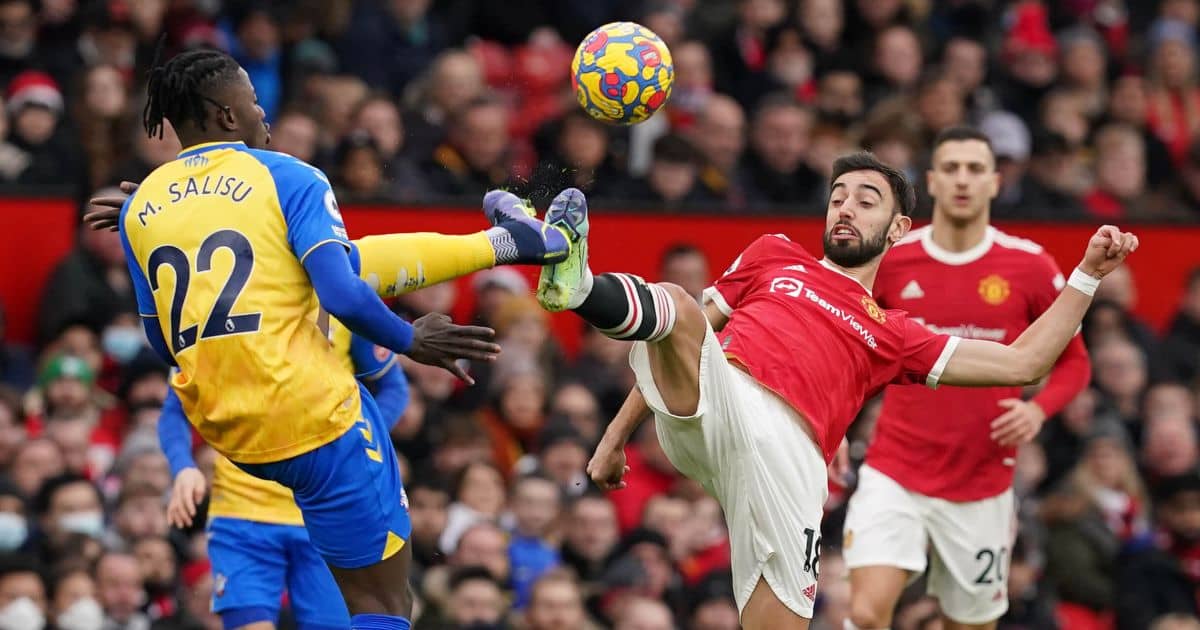 Romain Perraud: One of Southampton’s best players in the first half. Saved a Ronaldo effort off the line after seven minutes, enjoyed neat passing and then beat Dalot and Varane to force De Gea into saving his shot. 6.

Stuart Armstrong: Caused Man Utd problems going forwards and had a shot saved by De Gea shortly before the interval. More wasteful in the second half. 6.

James Ward-Prowse: Struggled to affect Southampton’s attacking play throughout the match – not his best game. 5.

Oriel Romeu: Another strong performer for Southampton, getting up and down the pitch. Indeed, he made good blocks in defence before combining well with Armstrong in attack and firing wide. Continued in that fashion in the second half. 7.

Mohamed Elyounoussi: Played with fluidity on the left and right of attack, whipping in some decent crosses. Enjoyed a similar role in the second half. 6.

Armando Broja: His end product was not there as he got past Varane and delivered a cross to no-one. Should have shown more desire to get onto a cross. Caused United even more problems in the second half, but again his final product was largely poor. 6.

Che Adams: Lost his footing and made a mess of a great first-half chance, but he played his part in defence. Made up for that with a great run and finish off the post to make it 1-1, while his work rate never dropped. 7.

Jack Stephens (on for Bednarek, 46): Enjoyed a fantastic second half, making several tackles and interceptions. 7.

Valentino Livramento (on for Elyounoussi, 71): Helped Southampton defend in the closing stages. 5.