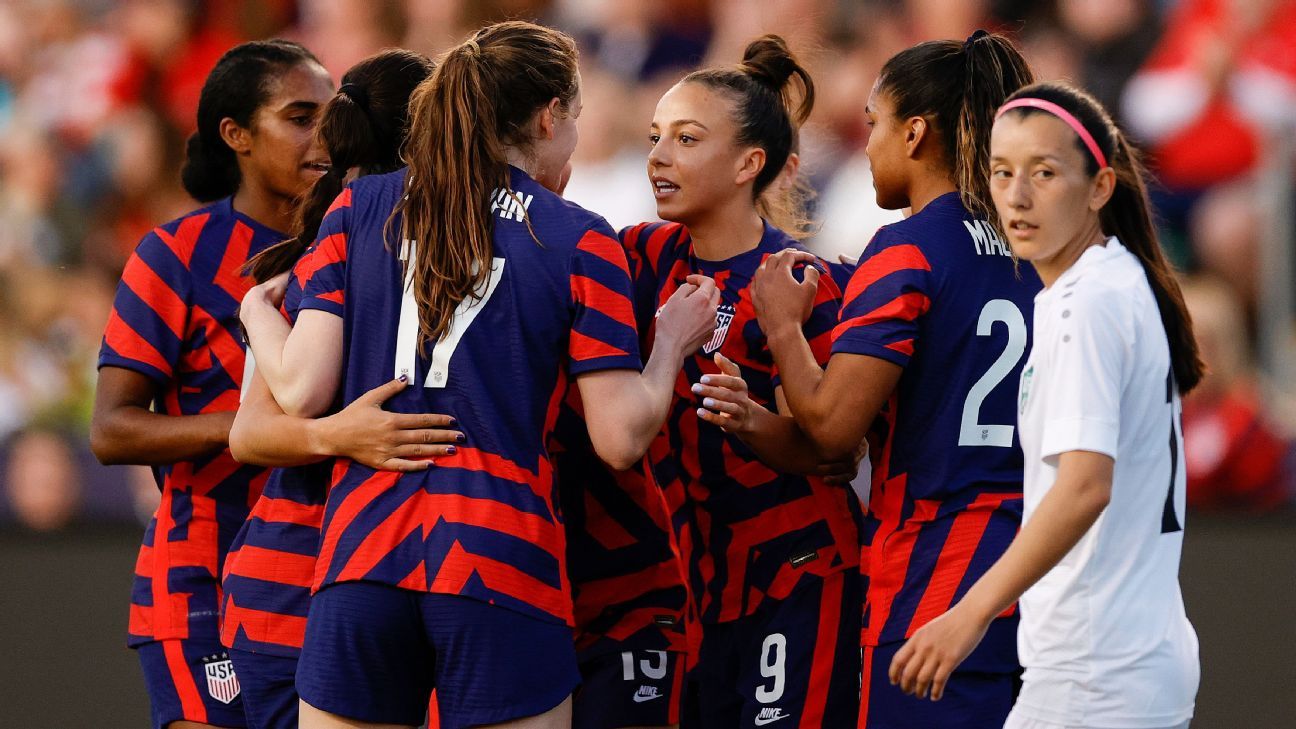 Rose Lavelle and Catarina Macario each scored a pair of first-half goals, and the U.S. women’s national team beat Uzbekistan 9-0 on Tuesday to extend the team’s unbeaten streak to 67 games on American soil.

Trinity Rodman, who came in as a second-half substitute, scored her first international goal for the United States. The 2021 U.S. Soccer Young Player of the Year is the daughter of former NBA player Dennis Rodman.

Mallory Pugh, Midge Purce and Ashley Sanchez also scored for the United States, which opened the game with its youngest starting lineup -averaging 24.98 years- since 2007.

The U.S. team also defeated Uzbekistan 9-1 in Columbus, Ohio, on Saturday in the first game of the two-game series. Sophia Smith had a hat trick in the victory.

An own goal just 25 seconds into the game gave the United States the early lead at Subaru Park, home of Major League Soccer’s Philadelphia Union.

Macario, who plays professionally for Lyon, scored in the 12th minute and in first-half stoppage time. Lavelle’s goals came in the 25th and 27th minutes.

Pugh scored in the 14th for her fifth international goal, helping the U.S. to a 6-0 lead at the break.

Rodman’s goal in the 71st came in her third appearance for the United States. Just 21, Rodman plays professionally for the Washington Spirit of the National Women’s Soccer League.

Aubrey Kingsbury made her debut for the national team in goal. At 30, she’s the oldest player in team history to earn her first cap.

See also  USWNT cruises after 3 own goals by NZ's Moore

Naomi Girma, the No. 1 pick in the 2022 NWSL draft by the San Diego Wave, also made her debut for the United States. The average caps among the starting lineup was 21, and it was the first time since 2013 that the team didn’t start a player with 100 or more caps.

The U.S. team was originally scheduled to play a team from Asia for the international break but that team had to pull out. Coronavirus and World Cup qualifying made finding a new opponent difficult.

Two veterans, Becky Sauerbrunn and Megan Rapinoe, were left off the roster for the two games against Uzbekistan because of injury. Julie Ertz recently announced that she was expecting her first child, and Crystal Dunn is also pregnant.

Other veterans who weren’t with the team included Alex Morgan, Tobin Heath and Christen Press as coach Vlatko Andonovski continued to emphasize young players in preparation for World Cup qualifying in July.