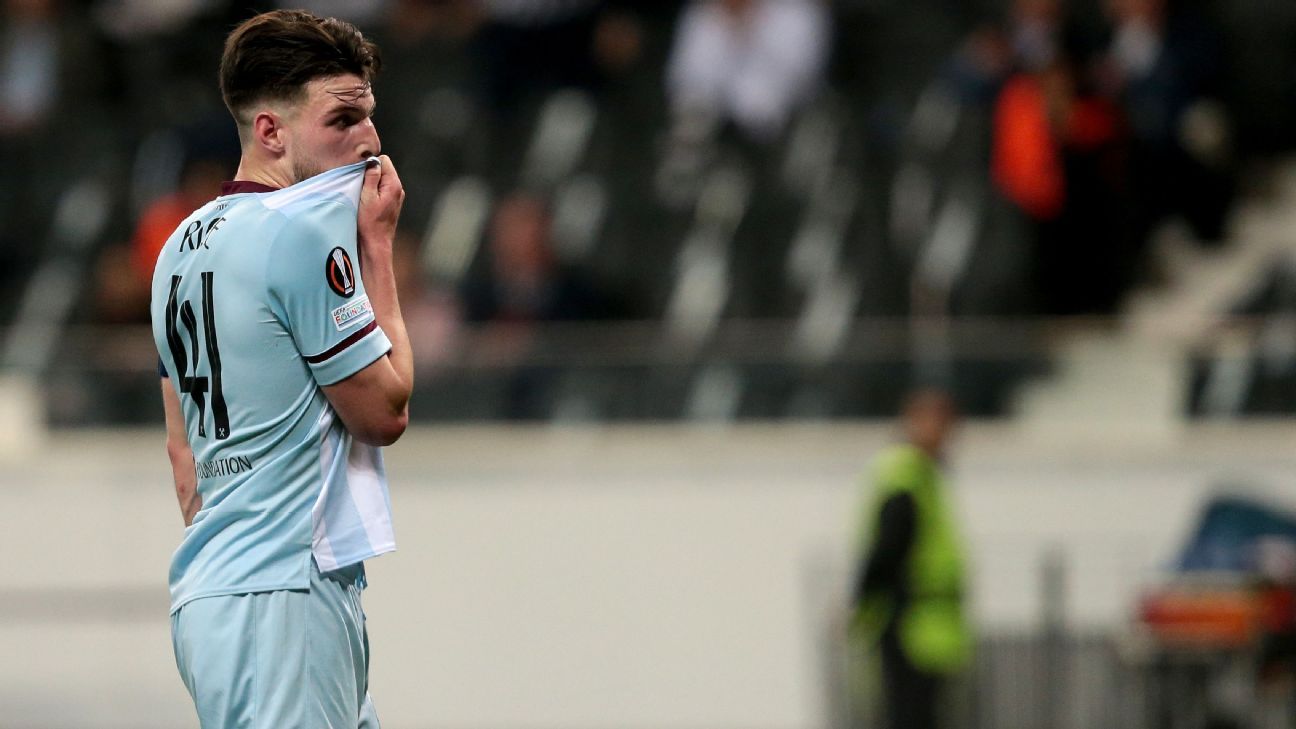 Declan Rice is expected to reject West Ham‘s latest contract offer but the club continue to insist he is not leaving in the summer transfer window, sources told ESPN.

The 23-year-old has turned down multiple extensions which would make him the highest paid player in West Ham’s history on £200,000-a-week.

– Ogden: Man United clear for Rice, but would he want to join a declining club?

Sources told ESPN that West Ham’s latest attempt involves a contract which could run for up to eight years, potentially tying him to the east London side until 2030.

Although he could receive a considerable wage increase, Rice is thought to have shown little interest in signing fresh terms given his existing agreement runs until 2024.

The club also have an option to extend Rice’s deal by a year and, significantly, that can be triggered at any time. So, given Rice effectively has three years remaining on his deal, West Ham feel in a strong position to rebuff any interested clubs in their star player.

West Ham boss David Moyes has previously suggested it would take £150 million for the club to even consider an offer. Sources told ESPN that a bid of £120m would test their resolve but either way, West Ham see Rice as a vital part of their future as they look to build on another promising season in which they are fighting for a top six finish and reached the Europa League semifinals.

Sources have also suggested that there are doubts among Rice’s much-touted suitors. Manchester City have distanced themselves from a move after signing Erling Haaland from Borussia Dortmund, although they remain in the market for a central midfielder.

Manchester United are interested but are pursuing a deal for Barcelona‘s Frenkie De Jong and are thought to have baulked at West Ham’s asking price for Rice.

Chelsea have tracked Rice for several years after releasing him aged 14 amid concerns over his physical and technical ability. Although Rice has improved immeasurably since, sources have told ESPN that senior figures at the club still harbour some concerns about his technique, especially given the high valuation involved.

Regardless of concerns, Rice has other admirers at the club and it remains to be seen whether that deters Chelsea from making an offer with their transfer plans yet to be finalised as the Todd Boehly-led takeover of the club continues.

Rice was this week voted West Ham’s Player of the Season, a personal prize which follows on from his Premier League Player of the Season gong at March’s London Football Awards, after which he told ESPN about his “urgent” desire to play Champions League football.

“It is as urgent as possible,” he said. “I feel like, not only for me, that’s for every young player as well.

“We were really close with West Ham at the minute and last season, it was gutting to lose out on it last year but we are pushing. Look, we’ll keep going. Champions League is a big aim of mine and hopefully one day I can play in it and do well.

“I feel like I am one of the established top players around the world. I am only 23 so I am still young — that’s what I mean in that sense — but in terms of my playing ability and the way I’ve performed consistently, I see myself as an established player now who has got good experience and can play at any level if required.”

See also  Serie A Correct Score Predictions: Back Torino and Milan to win in GW31