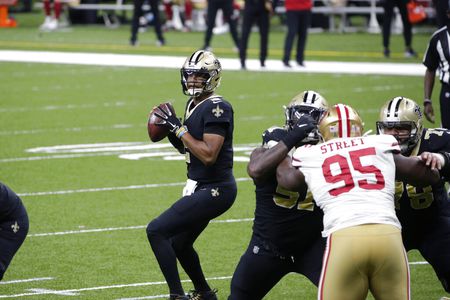 After being without much firepower in 2021, the New Orleans Saints have a fun group for quarterback Jameis Winston to target this year.

No team struggled more to throw for yardage last season than the New Orleans Saints. Expect that to change.

In 2021, New Orleans was without star receiver Michael Thomas all year as he recovered from ankle surgery. Behind Thomas, the depth was non-existent. The Saints were led in receiving by Marquez Callaway with 698 yards, followed by Deonte Harty (570) and running back Alvin Kamara (439). Not ideal.

This offseason, general manager Mickey Loomis has been aggressive in fixing the problem. In free agency, the Saints signed former LSU star Jarvis Landry to a one-year, $6 million deal. Landry comes in after spending four seasons apiece with the Miami Dolphins and Cleveland Browns.

In the draft, it was an Ohio State stud for the Saints, with Chris Olave landing in Louisiana with the 11th-overall pick. Olave joins a now-healthy Thomas and the newly-acquired Landry, forming a terrific trio for quarterback Jameis Winston, who himself is coming back from a torn ACL.

This weekend, Olave talked about joining Thomas and Landry in the receivers room, two veterans with plenty to offer. Per ESPN:

“I can’t wait to learn from them, those two legends. I just started playing receiver my junior year of high school. Coming here and having Mike Thomas, Jarvis Landry help me, I have a lot of room for development, I can’t wait to max that out.

While New Orleans is probably fighting for a wild card spot with the Tampa Bay Buccaneers being clear favorites in the NFC South, there’s ample reason to see the Saints as a dangerous team come January. New Orleans has a quality defense with studs abound, including corner Marshon Lattimore, safety Tyrann Mathieu, edge rusher Cameron Jordan and linebacker Demario Davis.

And if Olave, Landry and Thomas can stay healthy and perform, New Orleans has ample hope for playing into the postseason.