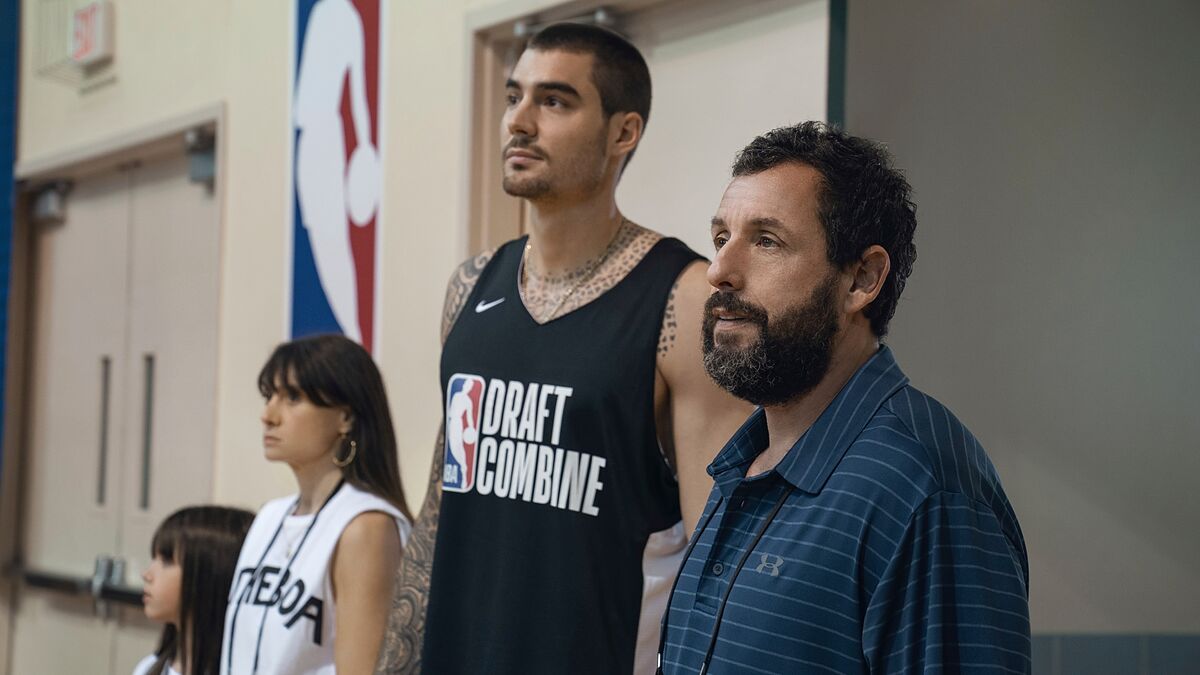 Adam Sandler is back on the big screen with his new film Hustle, which brings the NBA world to Hollywood, following his critically acclaimed dramatic performance in Uncut Gems in 2019.

Sandler, who portrays Stanley Sugerman, an embattled NBA scout for the Philadelphia 76ers, discovers Bob Cruz, who is played by Utah Jazz big man Juancho Hernangómez, in the hopes of assisting him in making the transition from Spain to the NBA.

The film, which is being produced by the SpringHill Company with LeBron James serving as an Executive Producer, stars Queen Latifah, Robert Duvall, and former NBA player Kenny Smith.

Hustle premiered in select theaters and was released on Netflix on Wednesday, June 8.

The inspirational story includes numerous real-life NBA players, providing an authentic look into the life of a professional basketball scout; however, the story is not based on a single experience.

Will Fetters, who was nominated for an Academy Award for his work on the critically acclaimed film A Star Is Born, and Taylor Materne, who worked on the NBA 2K video games, collaborated on the screenplay.

Which NBA stars make an appearance in Hustle?

The Philadelphia 76ers are heavily featured in the film, as seen in the trailer, with Tobias Harris, Tyrese Maxey, and Matisse Thybulle appearing alongside former 76er Boban Marjanovic.

On the big screen, Marjanovi is quickly making a name for himself. In the 2019 film John Wick 3, he played the world’s tallest bad guy opposite Keanu Reaves.

Trae Young of the Atlanta Hawks, Jordan Clarkson of the Utah Jazz, Khris Middleton of the Milwaukee Bucks, Aaron Gordon of the Denver Nuggets, Kyle Lowry of the Miami Heat, and Seth Curry of the Brooklyn Nets all appear in the film.

The performance of Minnesota Timberwolves guard Anthony Edwards, who is perfectly cast as the slick-talking villain, has everyone talking.