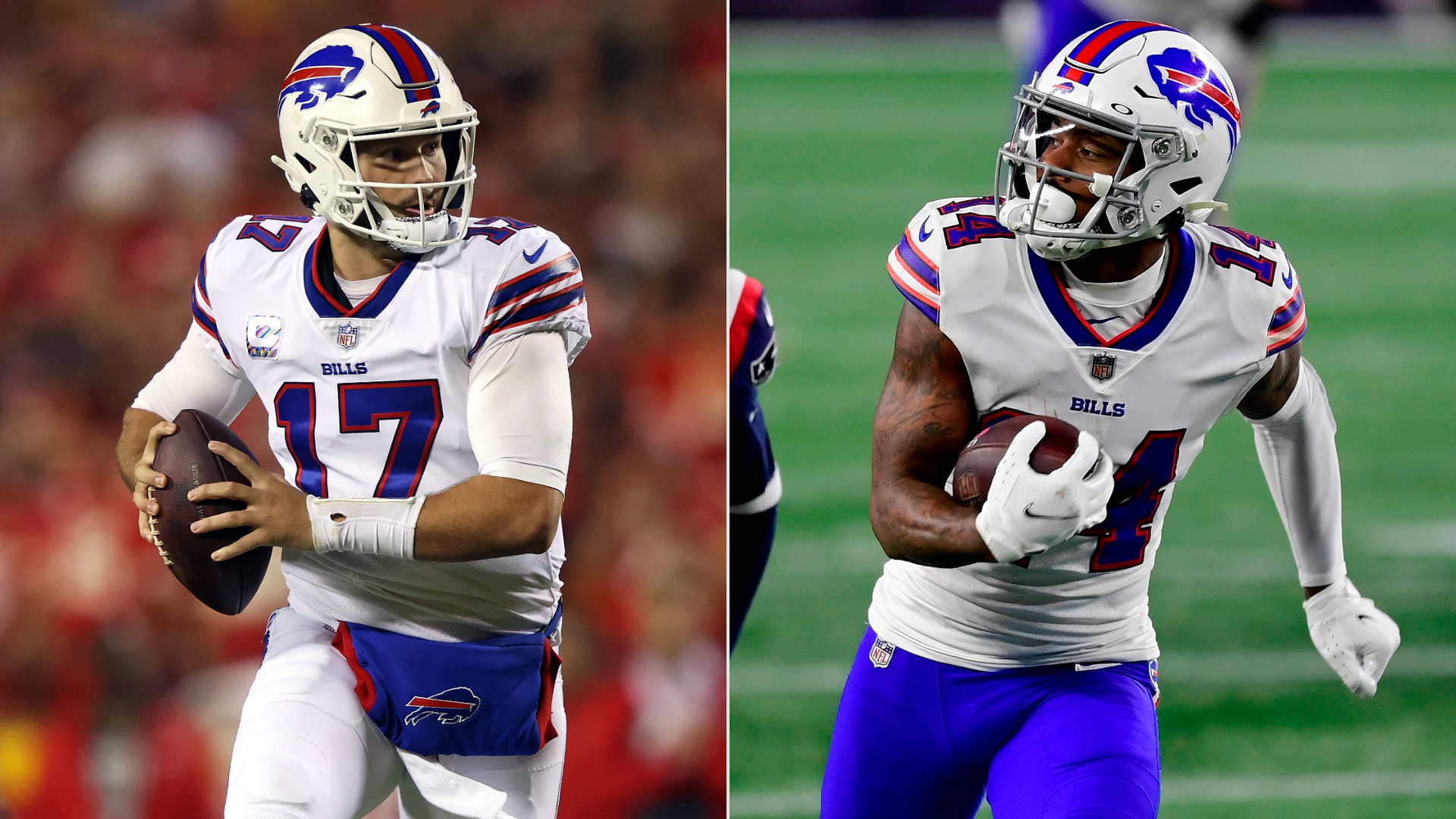 Smack-dab in the middle of wild-card weekend, the Bills host the division-rival Dolphins on Sunday at 1:00 p.m. Buffalo and Miami split their regular-season series 1-1, but oddsmakers have made it abundantly clear that the rubber match will be far from a coin flip. With MVP favorite Josh Allen and the second-seeded Bills heavy -13 favorites due to ‘fins QB Tua Tagovailoa’s ongoing status in the NFL’s concussion protocol.

With Dolphins head coach Mike McDaniel officially declaring Tagovailoa out and preparing to face the NFL’s No. 2 offense with Skylar Thompson, fantasy points could be at a premium for Miami. Buffalo, meanwhile, enters the weekend riding a seven-game winning streak and scoring 34 points per game over the past three weeks. With the Dolphins defense surrendering the ninth-most points in the NFL this season, Sean McDermott’s Bills could be looking at another strong performance.

If Tagovailoa had somehow cleared the concussion protocol this week, the odds — and the DFS landscape — would be entirely different for this game. We would likely be recommending dynamic ‘fins wideouts Tyreek Hill ($16,500) and Jaylen Waddle ($13,500), maybe even captaining one of them for 1.5 times the price (and 1.5 times the points production). But this game will be all Buffalo — with the Orchard Park faithful continuing to rally behind their team in the midst of Damar Hamlin’s amazing recovery.

You know the deal: your DFS lineup should reflect the game script you anticipate. If you don’t like a team’s chances, fade its stars. If you like one team to dominate, ride its skill players as much as you can. Let’s dive into our Bills-Dolphins DraftKings Showdown squad, and break down exactly why each draft pick made the cut.

The price could have been $20,000 and we still would have probably made the MVP candidate our captain. Allen averages over six points more than the next-best fantasy asset in this game (Hill), and he’s facing a team that ranks amongst the bottom seven teams in the league in air yards and passing TDs allowed. Miami has also been dreadful at forcing turnovers, averaging the fourth-fewest interceptions and the third-fewest takeaways overall. But this entire discussion can be wrapped up with two facts: Allen finished the 2022 NFL season with the second-most fantasy points (412.4, in just 16 games due to the Hamlin injury), while the Dolphins allowed the second-most DK points to QBs (365.5). We’ll take that kind of odds combo in our booster-spot 24/7/365.

With its perpetually banged-up secondary, the ‘fins primary defensive weakness this season has been containing the pass. That’s not great when you’re going against a Ken Dorsey-led offense that rarely takes its foot off the gas. Naturally, we want to capitalize on Buffalo’s advantage as much as we can, so we decided to construct a bit of a stars-and-scrubs build. Allen’s clear No. 1 receiver continues to be Diggs, who finished the season tied for the second-most TD catches in the NFL (11) and ranked fifth in both air yards and DK points (again, despite playing just 16 games). He has averaged 73 receiving yards per game against Miami in his career, and has scored three TDs in Buffalo’s past four games against the division rival. Spend the dough and secure the game’s two top scorers.

With running mate Raheem Mostert ($8,000) questionable with a fractured thumb that McDaniel deemed “serious,” we expect the lion’s share (if not all) of Miami’s carries to go Wilson’s way. And the veteran and longtime McDaniel favorite has come through when he has seen high usage this season. In the eight games in which JWJ has touched the ball 14 or more times, he has totaled 760 scrimmage yards and four TDs. Buffalo’s defense has been stout — the second-best scoring D and sixth-best in terms of total yards — but it has allowed 125 ground yards per game over the past three weeks. We like the upside here.

Davis assembled a roller-coaster 2022 NFL season, failing to live up to the lofty expectations many a fantasy analyst put on him during the preseason (including yours truly). But let’s not forget how much damage the wideout inflicted in Buffalo’s playoff run this time last year. The 23-year-old had 10 receptions for 242 yards and five TDs, 8-201-4 of which came in the divisional round against Kansas City at Arrowhead Stadium. We want guys with ice in their veins during the biggest pressure situations, and Davis proved last postseason that he fits the bill.

Since we’re expecting a rough offensive day for the Dolphins, rostering the Bills’ D/ST makes sense. We already told you Buffalo allowed the second-fewest points and sixth-fewest total yards this season, and a date with Skylar Thompson could make this the highest-scoring D/ST of the weekend. The 25-year-old QB has just one TD in 105 passing attempts this season, and he’s thrown three interceptions and been sacked six times. Buffalo has scored double-digit points in three of its past four games, including a robust 19 against the division-rival Patriots last weekend. Start ’em up and watch them smash the dreams of all Fish-fans.

We’ve officially reached the ‘scrubs’ part of our lineup build, as we can’t even afford John Brown at $2,600 (side note: we actually considered drafting Brown over the Bills, but the money we saved there wouldn’t net us much of an upgrade over Beasley). Like Brown, Beasley came back to Buffalo toward the end of the season, presumably to help McDermott’s squad on its Super Bowl quest. The slot receiver is a shell of his formerly-dominant self, but he still runs routes quickly and has strong hands. You can’t get much better value in DFS for under $1,000. Now we have as close to a receiving monopoly on the Bills as we can get, mirroring our expectations for the narrative of this lopsided game. Good luck!