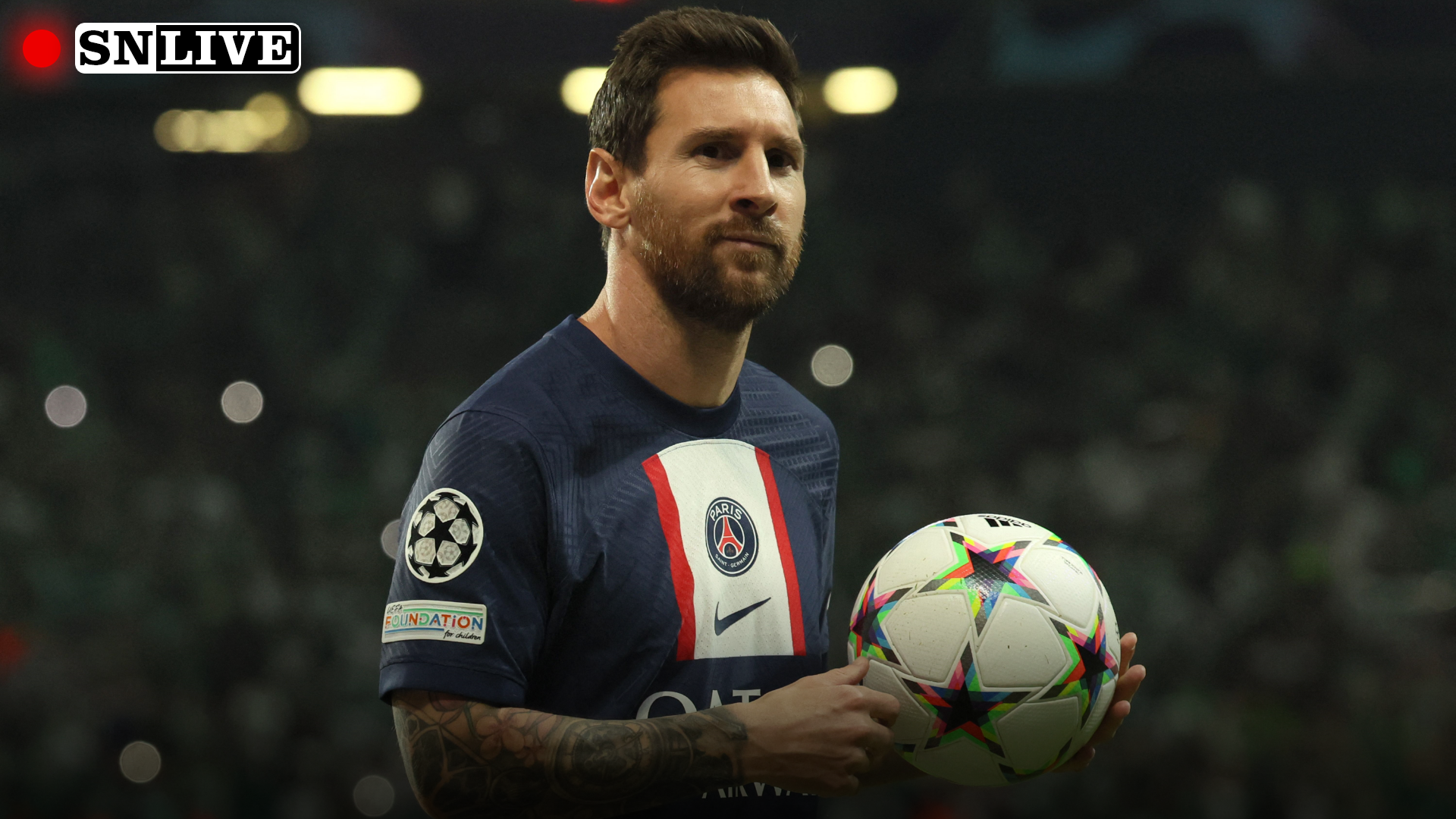 Lionel Messi makes his long awaited return to PSG after victory at the 2022 World Cup as the French giants host basement-dwellers Angers at Parc des Princes.

Messi re-enters the squad alongside a previously suspended Neymar as the three-headed PSG attacking monster reunites. Kylian Mbappe himself was unable to carry the load as the Parisians suffered defeat for the first time this season in the last league match, falling to second-place Lens to see their lead atop the table shrink to four points.

Today’s opponent Angers are expected to provide much less danger, as the club sits bottom of the Ligue 1 table without a single point in league play earned since September.

That will provide the perfect rebound opportunity for PSG as they hope to return to form, eyeing the start of Champions League knockout stage play in one month’s time.

The Sporting News will be following the match live and providing score updates, commentary and highlights as they happen.

PSG vs. Angers: First half

20th min: Neymar takes another crunching tackle from Angers captain Pierrick Capelle and crumples to a heap. The world’s most fouled player is taking another beating. He grimaces but gets back to his feet.

14th min: Angers have their first counter-attack attempt, moving down the left through Abdallah Sima, but a heavy touch sees the chance fizzle out as the ball flies over the end line. First signs of life from the visitors in the French capital.

12th min: It’s back to a slow, plodding possessional approach for PSG, and Angers have offered very little in the way of opposition.

Neymar comes up limping after he’s challenged on a speculative through ball, shielded off by Angers defender Abdoulaye Bamba. Neymar is recently recovered from an ankle injury suffered during the World Cup, and you wonder if that’s still somewhat bothering him. One to watch moving forward.

5th min: GOAL! PSG! That didn’t take long! PSG hardly had a sniff of the attacking third, and in one of their first forays into the penalty area, they profit. Nordi Mukiele down the right flank gets free vertically, and he delivers a low cross right to the feet of Hugo Ekitike. The PSG striker gets outside position on Cedric Hountondji and finishes with a smart cut ball inside the far post.

3rd min: PSG controlling the early possession, as expected. Very little danger to this point though, as they knock the ball around in the middle third, near the halfway line. Angers remain compact defensively. Lionel Messi attempts to dribble down the opponent’s throat but he’s surrounded by three red shirts and is dispossessed.

Kickoff: The teams held a minute’s applause in memory of Pele, and now the match is under way! No Kylian Mbappe for PSG, but they have Lionel Messi and Neymar returning to the squad and the starting lineup. Meanwhile, Angers need a lifeline in a worst way.

5 mins to kick: As the match is sest to begin, the PSG squad, including Brazilian players Neymar and Marquinhos, are paying tribute to departed legend Pele with their shirts during warmups.

13 mins to kick: Attendance at Parc des Princes is less than ideal! Lionel Messi is obviously a huge draw globally but locally the absence of Kylian Mbappe likely hurts the expected attendance overall.

PSG vs. Angers – as sparse as it gets here 🥶 #PSGSCO pic.twitter.com/ktoNB9cxMi

25 mins to kick: All eyes are on Lionel Messi as he warms up ahead of his return to PSG action!

45 mins to kick: In the 1004th match of Lionel Messi’s career, he will play for the first time as a World Cup champion.

55 mins to kick: Lineups are in, and it’s as expected for PSG with Lionel Messi and Neymar returning, while Kylian Mbappe is rested, with Hugo Ekitike in. There was some buzz that young Warren Zaire-Emery could be deployed in midfield, but instead it’s Danilo, Vitinha, and Fabian Ruiz chosen instead. Thanks to injuries, PSG have just one defender, 17-year-old El Chadaille Bitshiabu, on the bench.

Sofiane Boufal makes the bench but does not start. Ivory Coast international Abdoulaye Bamba gets a rare start at right-back in place of regular Yan Valery, who does not appear in the squad. Up front is 21-year-old Abdallah Sima who gets the nod for the third straight game, having scored in the defeat to Lorient last time out.

70 mins to kick: While lineups are not yet out, one player who will not make the PSG squad is Kylian Mbappe, who has been given extra days off as the club takes on one of the worst teams in the league. He was not included in the matchday squad and will be given time to recover ahead of a match of much higher importance on Sunday against Stade Rennes.

🆗📄 The Parisian squad to face Angers on Wednesday

85 mins to kick: Speaking of players returning from World Cup duty, Sofiane Boufal hasn’t returned for Angers quite yet. While Messi has the age, pedigree, and trophy to support his time away, Boufal’s absence has instead caused rumors of discontent at the bottom-dwelling Ligue 1 club.

Interestingly, he reportedly returned to training last week and was included in the Angers squad and we will soon find out whether he’s been deployed today for the first time since Morocco’s time at the World Cup ended.

120 mins to kick: Lionel Messi returns to club action today from World Cup duty, and he’s been recognised as one of five PSG players to be nominated for selection in the FIFA 23 Team of the Year. The other PSG players nominated are Kylian Mbappe, Neymar, Achraf Hakimi, and Marquinhos.

Lionel Messi is back for PSG in his first appearance at the club level since winning the 2022 FIFA World Cup, while his strike partner Neymar also returns from his one-match suspension. However, Kyilan Mbappe is not available as he was given the match off by manager Christophe Galtier, not included in the matchday squad.

PSG’s midfield construction will be something to watch as Galtier has yet to find the right mix of players in the center of the pitch. They are without Marco Verratti who missed PSG training on Tuesday due to a quad injury, and was ruled out of the match shortly after. That could see a way back in for out-of-favor Vitinha.

Achraf Hakimi is suspended for the match due to yellow card accumulation, seeing Nordi Mukiele slot in at right-back. Nuno Mendes is also injured, meaning PSG are without both first-choice full-backs. There is just one defender, 17-year-old El Chadaille Bitshiabu, on the bench.

World Cup standout Sofiane Boufal, who leads the team in goal contributions this season, has been absent since World Cup duty and has yet to return to the club. There are rumors he’s using an extended absence to force his way out after his impressive display in Qatar. However, he returns today to make the Angers bench.

Ivory Coast international Abdoulaye Bamba gets a rare start at right-back in place of regular Yan Valery, who does not appear in the squad. Up front is 21-year-old Abdallah Sima who gets the nod for the third straight game, having scored in the defeat to Lorient last time out.

Starting goalkeeper Yahia Fofana has been missing since picking up a knee injury in mid-November, while defender Ibrahim Amadou is also sidelined long-term with a calf problem.

How to watch PSG vs Angers

UK: Wednesday’s match between PSG and Angers from Parc des Princes in Paris will be broadcast in the United Kingdom by BT Sport, with streaming also available.

USA: Ligue 1 is broadcast all season long in the United States by beIN Sports, which is available to stream via fuboTV.

Canada: Ligue 1 is broadcast all season long in Canada by beIN Sports, which is available to stream via fuboTV.

Australia: Ligue 1 is broadcast all season long in Australia by beIN Sports, with this particular match available on both television and online streaming.

In addition, the total goals over is inflated to 3.5, and even higher in some places, with PSG expected to score in droves as Lionel Messi and Neymar return to the lineup. Interestingly, however, Angers are thought to be a good bet to score themselves, as the PSG defensive unit struggles with injuries.