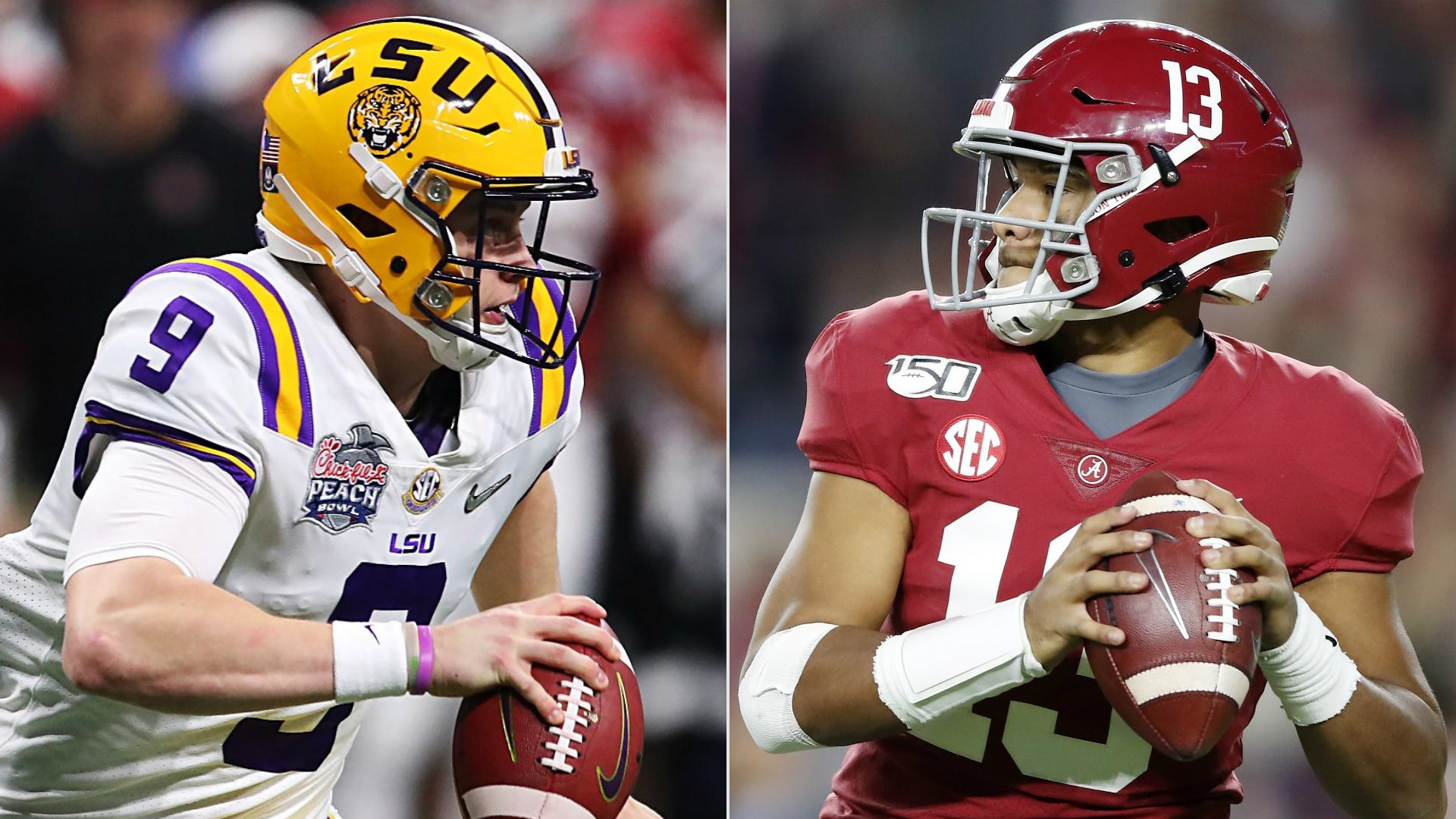 The 2020 NFL Draft is proving to have one of the strongest quarterback classes in recent league history. Although that class has some time to go before matching the long-term punch of the 2004 draft — when Eli Manning, Philip Rivers, Ben Roethlisberger were all taken in the first round — it’s off to a great start.

From Joe Burrow being taken No. 1 overall by the Bengals through Jalen Hurts going as a surprise second-round selection at No. 54 overall by the Eagles, four of the top five QBs drafted have taken teams into the 2022-23 NFL playoffs.

Between Burrow and Hurts, the Dolphins and Chargers took Tua Tagovailoa and Justin Herbert back-to-back at No. 5 and No. 6 overall. While we wait for No. 26 overall pick Jordan Love to get his shot with the Packers, that quartet is all in the postseason together for the first time after only three seasons.

Here’s revisiting how those four QBs all were taken in the right spots in 2020, from the pre-draft buildup to the live selections:

Going into the 2019 college football season, Tua Tagovailoa was the favorite to be the No. 1 overall pick in 2020. His stock saw an early, meteoric rise when he relieved Hurts in the 2018 College Football Playoff championship game as a freshman and rallied his team past Georgia, 26-23 in overtime.

Tagovailoa followed that with a stellar season starting as a sophomore in ’18, playing over Hurts. Hurts decided to transfer to Oklahoma a season later, replacing that year’s No. 1 overall pick, Kyler Murray.

Meanwhile, Burrow, after losing the battle to start for Ohio State to the late Dwayne Haskins in the ’18 offseason, transferred to LSU. Also that year, Herbert was set to become Oregon’s full-time starter as a junior.

Herbert was the first to have a shot to go No. 1 overall in 2019 after he lit it up for the Ducks. But as a great student coming from a family known for academic excellence, he returned to college that year to finish his athletic career as a senior.

While Murray (Cardinals), Daniel Jones (Giants) and Haskins (Commanders) were the first-rounders in ’19, Herbert then was left battling a red-hot Tagovailoa for the top of the QB board.

That was before Burrow put up the best passing season in college football history. He showed off incredible pro promise in leading a loaded offense featuring Justin Jefferson and future Bengals teammate Ja’Marr Chase all the way to a perfect, prolific championship run.

Hurts wasn’t thought of as an NFL starting QB prospect while at Alabama, first starting and then getting replaced by Tagovailoa, But he took advantage of being in a great offense under Lincoln Riley at Oklahoma — one that made Murray and Baker Mayfield top picks — with a dazzling season as a dual-threat QB.

Although Burrow and LSU blew out Oklahoma in the CFP semifinal, that Peach Bowl was still a high-profile extra showcase for Hurts. Burrow went on to beat 2021 No. 1 overall pick Trevor Lawrence and Clemson in the national title game.

The Dolphins started the 2019 NFL season at 0-7 and the “Tank for Tua” seemed to be in full effect in Miami — until around midseason, when it was clear that Burrow should be the top QB taken.

The Bengals, meanwhile, started 0-11 and finished at 2-14 to get the No. 1 overall pick, edging out the 3-13 Commanders. The Dolphins went 5-4 in the second half to end up 5-11 and fell all the way to No. 5 behind also the Lions and Giants. The Chargers also finished 5-11 in what would be Rivers’ final season with the team, but the draft order put them right after the Dolphins at No. 6.

While Burrow was the clear No. 1 choice, Tagovailoa’s rash of key injuries, most notably to his ankle and hip, raised questions about his durability for the NFL. Herbert came with different concerns regarding whether he could turn his arm, accuracy and athleticism into a more consistent QB in the NFL. Tagovailoa vs. Herbert then became the key pre-draft debate in Round 1, with Hurts’ Day 2 sleeper value as an intriguing side plot.

The Bengals had a rough first season with offensive-minded Zac Taylor as their head coach in 2019. It ended with them benching long-time starter Andy Dalton, who was in his ninth and final season with the team. They had the all-clear to take Burrow and it didn’t hurt that he was an Ohio kid with personality to go with the fact he could be a cerebral, unflappable leader.

Burrow has proved to be the right pick in short order. After recovering from a torn ACL he suffered in the middle of his rookie season, he joined the ranks of the AFC’s elite young guns by beating Patrick Mahomes and taking the Bengals to the Super Bowl in Year 2.

The Dolphins’ decision went down to the wire, or at least that’s what they had most believing. But given they were attached to Tagovailoa so early, everything was bound to come full circle as their selection.

At No. 2, Washington had just taken Haskins the previous year, and locked into the best defensive prospect in the class, Ohio State edge rusher Chase Young. At No. 3, Detroit already had Matthew Stafford, so it went with Ohio State cornerback Jeff Okudah.

At No. 4, the Giants opted for Georgia offensive tackle Andrew Thomas after drafting Jones high the year before. So after Burrow, as long as another didn’t trade up, the Dolphins had a direct path to Tagovailoa.

Miami chose Tagovailoa because of his having the higher floor given his production at Alabama. Herbert came with a higher ceiling, but he had some real risk of busting. The Dolphins couldn’t afford to mess around at the most important position and they a good succession plan in place from well-traveled, reliable bridge Ryan Fitzpatrick to Tagovailoa.

The Chargers had already parted ways with Rivers, who landed with the Colts for his final NFL season in 2020. They had no real QB solution, so they were set to take either Herbert or Tagovailoa, whomever the Dolphins didn’t take ahead of them.

Los Angeles also was hoping to sit Herbert and let him develop a little while it started another well-traveled, reliable bridge, Tyrod Taylor. But after Taylor suffered a punctured lung while getting treatment for a rib injury, it forced him out of the Week 2 game home game against the Chiefs.

Herbert played well right away in dueling Patriots Mahomes into overtime. He didn’t let up as a rookie to the point Anthony Lynn had to stick with him as the starter. Herbert erased all doubts about him by making a quick study of the offense and feeling comfortable throwing and running with his immense physical talent.

Herbert ended up as AP Offensive Rookie of the Year and was runner-up to Justin Jefferson for Sporting News NFL Rookie of the Year. He proved he could fit any system and took advantage of the team already having great skill players in Keenan Allen, Austin Ekeler and Mike Williams. Herbert hit his ceiling fast and surprised even Chargers brass with his immediate readiness.

MORE: Why is Justin Herbert called a ‘social media quarterback’?

Packers shock some with Love

With Burrow, Tagovailoa and Herbert off the board, Love, out of Utah State, was expected to the next QB selection. Some scouts had him as a late first-rounder; others had him as a mid-second-rounder at best.

Between No. 6 and No. 26, there was no team with a desperate need for a high-upside developmental QB. The Packers then made the move to take Love to sit behind Aaron Rodgers instead of giving Rodgers some more help. Consider wide receiver Tee Higgins (Bengals) and Michael Pittman Jr. (Colts) were still on the board ahead of going with the first two picks in Round 2.

With Love going to Green Bay, teams wanting to stash a potential near-future starter had to think about Hurts earlier than expected.

Eagles shock even more with Hurts

Hurts, beyond his big-armed passing skills, was most attractive as a potential hybrid player because of his running back-like rushing ability. But his range of outcomes was from Cam Newton in MVP form to Tim Tebow trying to find an NFL position.

The earliest Hurts could have gone was No. 37 overall to the Patriots, for whom Newton started 15 games in 2020, replacing Tom Brady. The Jaguars also needed some QB depth at No. 42, but they waited until the sixth round to take Jake Luton after taking Gardner Minshew in the fifth round the previous year.

The Steelers, also connected with Hurts, didn’t grab Roethlisberger’s potential successor at No. 49. The Eagles had just given a lucrative contract extension to 2016 No. 2 overall pick Carson Wentz an offseason earlier. They were hoping they landed a dynamic first-round receiver with Jalen Reagor at No. 21 overall in 2020 (they didn’t, while passing on Jefferson).

But creative offensive-minded coach Doug Pederson thought at worst Hurts could help in certain packages to take advantage of his athleticism and at best, could be a groomed into a strong backup for the oft-injured Wentz.

Other than the Patriots and Steelers, the Saints and Raiders were two other buzzy Hurts suitors. Neither team, however, had a second-round pick and would have needed to wait until the mid-third round to take Hurts.

Wentz had a rough 2020 plagued by turnovers. The Eagles stuck with their investment as long as possible, until he was benched for Hurts in Week 14. Hurts’ running and passing suggested Philadelphia might have more than a No.. 2. Wentz was traded to the Colts in 2021 after Pederson was fired, setting up Hurts on the trajectory to emerge as a top young starter.