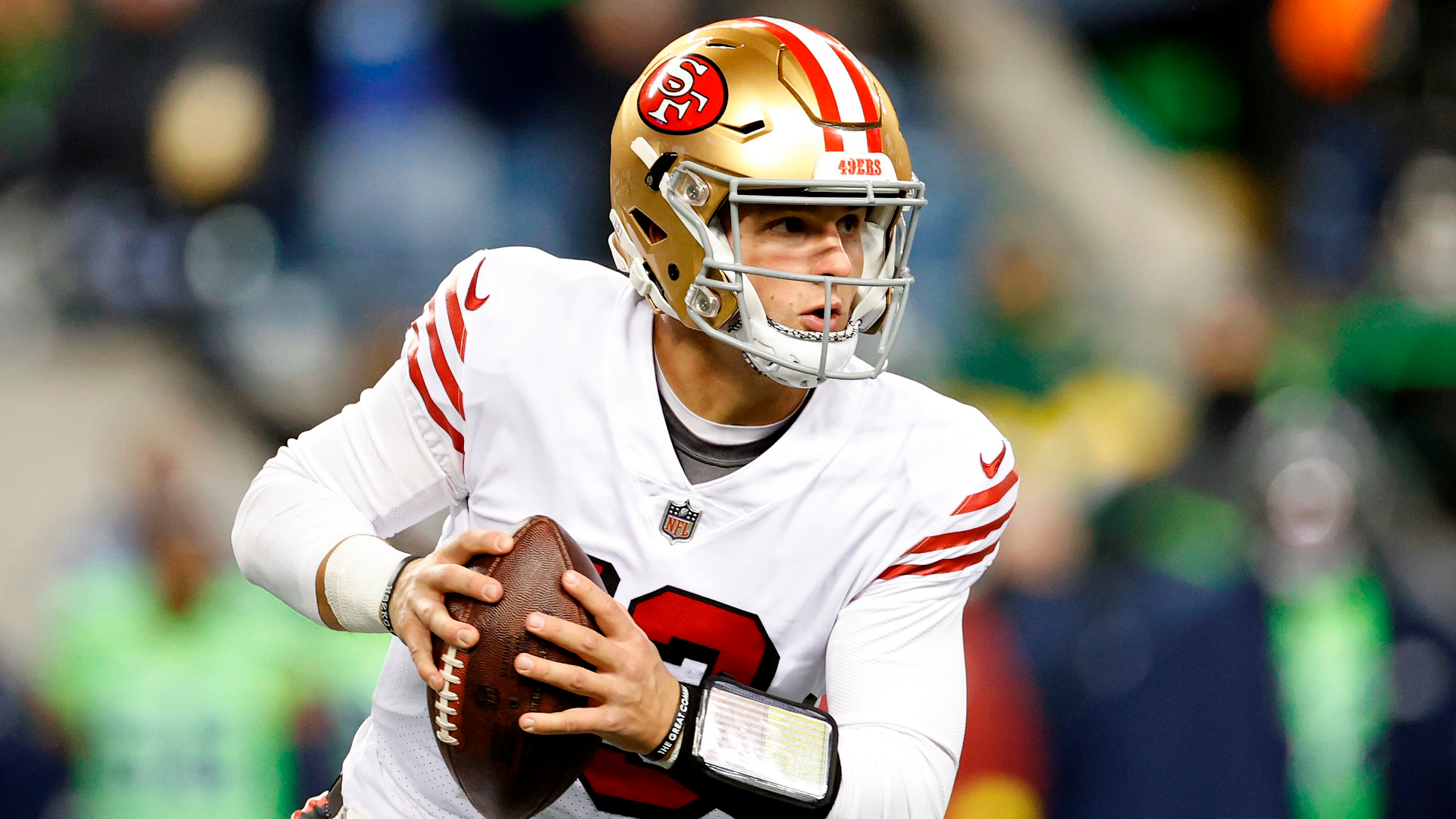 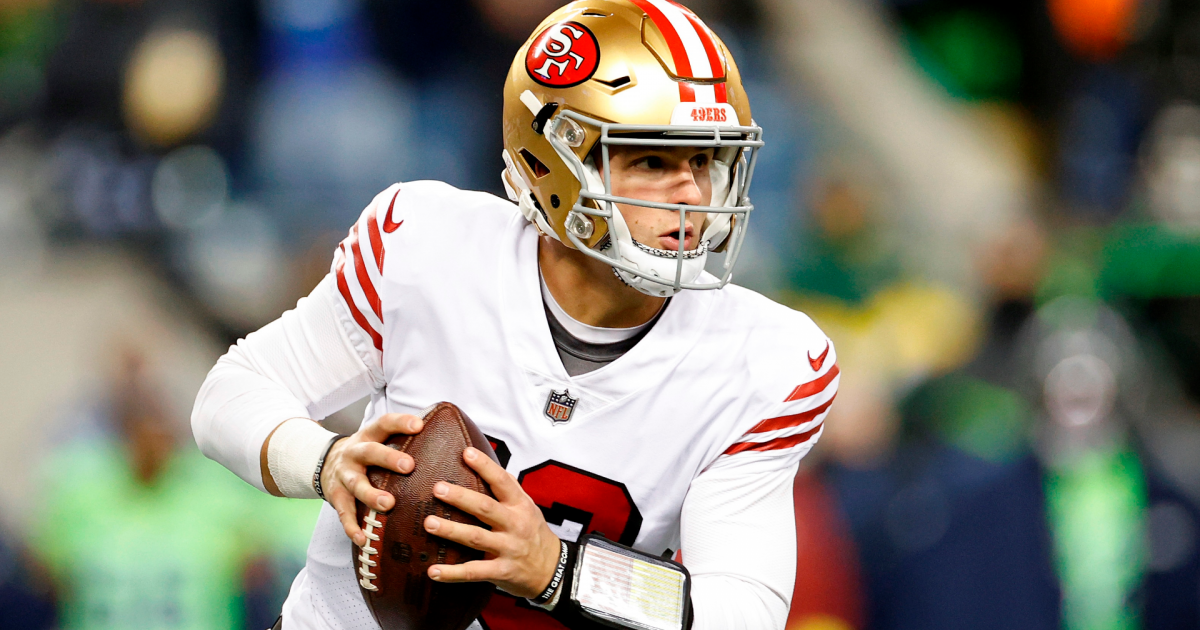 This season’s 49ers have all the makeup of Super Bowl champions. They’re a talented team with great players all over their roster and don’t have a glaring weakness with sound offense, defense and special teams.

But beyond all their strengths as the 13-4 NFC No. 2 seed in the 2022-23 NFL playoffs, there’s one big question about their chances to win Super Bowl 57: Can they do it with rookie seventh-rounder Brock Purdy at quarterback?

There’s a possibility Jimmy Garoppolo can recover from his left foot injury in time to be healthy enough to play at some point during the playoffs. But if Purdy keeps playing at a high level, it’s unlikely that Kyle Shanahan and the rest of San Francisco’s coaching staff would want to make a change.

Purdy has been stellar in the first six games of extensive action in his NFL career. He has helped the 49ers carry a 10-game winning streak into Saturday’s home wild-card game vs. the NFC West rival Seahawks.

In those half-dozen appearances after taking over when Garoppolo went down in Week 13 vs. the Dolphins, Purdy has completed 68.3 percent of his pass attempts with 13 touchdowns to 3 interceptions. He’s averaging 8.1 yards per attempt with a passer rating of 112.0. That efficiency would be No. 1 in the NFL, better than Garoppolo’s third-best mark at 103.0.

Purdy hasn’t played like a developmental late-round pick in the regular season, but there are concerns as the stakes are raised, his lack of big-game experience will hurt the 49ers at some point in the playoffs. That may be a popular take, but the reality is, Purdy is settled in as an asset for San Francisco, not a liability.

Here are four reasons to believe Purdy is for real and can prove it as the first-ever rookie quarterback of any draft status to help his team win a Super Bowl:

1. 49ers’ offense gives Purdy more support than any other QB in the playoffs

Purdy isn’t being called upon to throw for high volume. He’s not being asked to take off and run and create with his legs. His job, like Garoppolo’s, is to spread the ball around playing off a strong running game with superior blocking.

Distribution and execution is easier when a QB of any experience has so many weapons. Deebo Samuel is the most dangerous, but while he was injured again down the stretch, fellow wide receiver Brandon Aiyuk finished his first 1,000-yard receiving season and tight end George Kittle exploded for his first double-digit TD season.

Unlike Garoppolo before the middle of 2022 and other QBs playing for Shanahan in San Francisco, Purdy has also had the benefit of the game’s most elite pass-catching back, Christian McCaffrey. The 49ers excel at scheming men open and using play-action and other misdirection for further stamp that four-receiver advantage.

“Right when Jimmy went down all I had to do was go in, do what coach asked of me and get Deebo, BA, George, Christian, all those guys the ball,” Purdy told reporters ahead of wild-card weekend. “It hasn’t changed for all the games that I’ve played in so far. That’s still going to be the mind-set going into playoffs.”

2. 49ers don’t need Purdy to have high volume for them to win

Through his six games, Purdy is averaging only 218 yards passing per game. If he qualified, that number would be near the bottom of the league, even lower than Garoppolo’s 221.5-yard mean.

Because of their prolific running game feature McCaffrey and often dominant defense led by Nick Bosa and Fred Warner, the 49ers averaged just more than 30 pass attempts per game over the season. Purdy’s mark has been below 27 attempts per game.

When adjusting Purdy’s yards per passing attempt for TDs and INTs, it goes up to a standout 8.6. He’s making the most of the times he is dropping back.

Purdy. like Garoppolo, isn’t asked to take deep shots often; instead the efficiency of big plays comes from getting the ball quickly in the open field to his weapons and putting them in position to rack up massive yards after the catch. That’s the calling card for McCaffrey and Samuel and Kittle also has been most explosive self of late.

MORE: Ranking every QB in the 2023 playoffs, from Joe Burrow to Skylar Thompson

The 49ers were 7-4 when Purdy needed to relieve Garoppolo to make sure they beat the Dolphins, an AFC playoff team. The 49ers did end up pulling away from the second-place Seahawks (9-8) in the division and jumped the Vikings for the No. 2 seed in the end.

But earlier in the season, it was fight to get ahead of the surprising Seahawks in the West. Given the team had reeled off four consecutive wins with a healthy Garoppolo to overcome a 3-4 start, it was far from a sure thing they would maintain momentum with Purdy.

Purdy was put into an immediate tough situation vs. Miami and in his first start, lined up against Tom Brady and Tampa Bay at home before needing to play at hostile Seattle with the division on the line.

There was a playoff feel to those matchups vs. three eventual playoff teams. Purdy came through better than anyone could have expected.

“We’ve been playing playoff games for a long time and the pressure’s always on,” Shananan told reporters during wild-card week. “Brock takes that into every game.”

The 49ers’ veterans love Garoppolo and that have given that same energy and respect for Purdy. That’s come along with the good-natured and celebratory ribbing including a NSFW nickname that rhymes with his first name.

Purdy wouldn’t be winning so much so soon with winning over his teammates. When watching how they respond to its success now, it’s obviousl he didn’t take long to do that.

“All the guys in the locker room have my back,” Purdy said. “We’ve all grown together, so we’re ready for what’s ahead.”