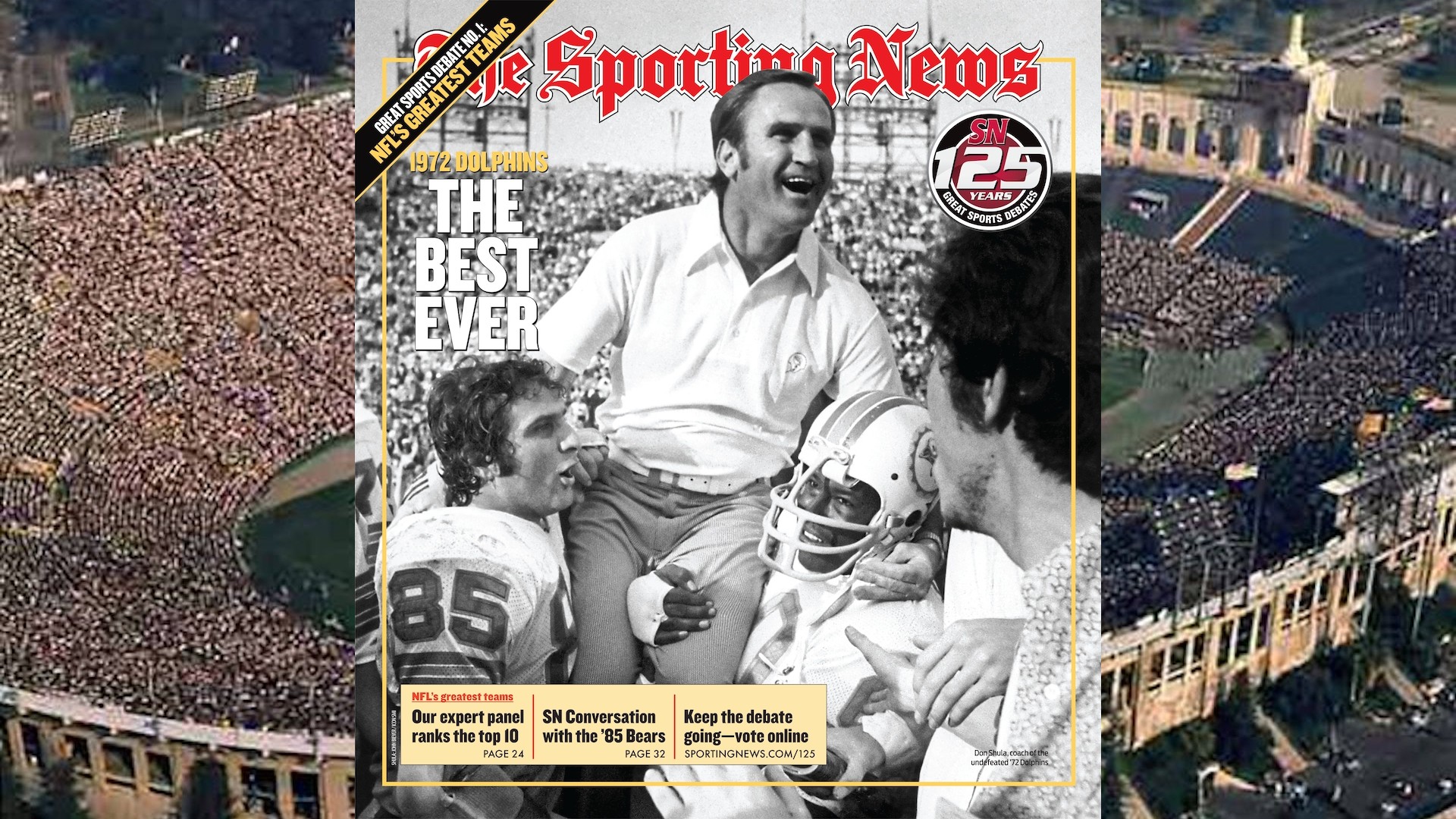 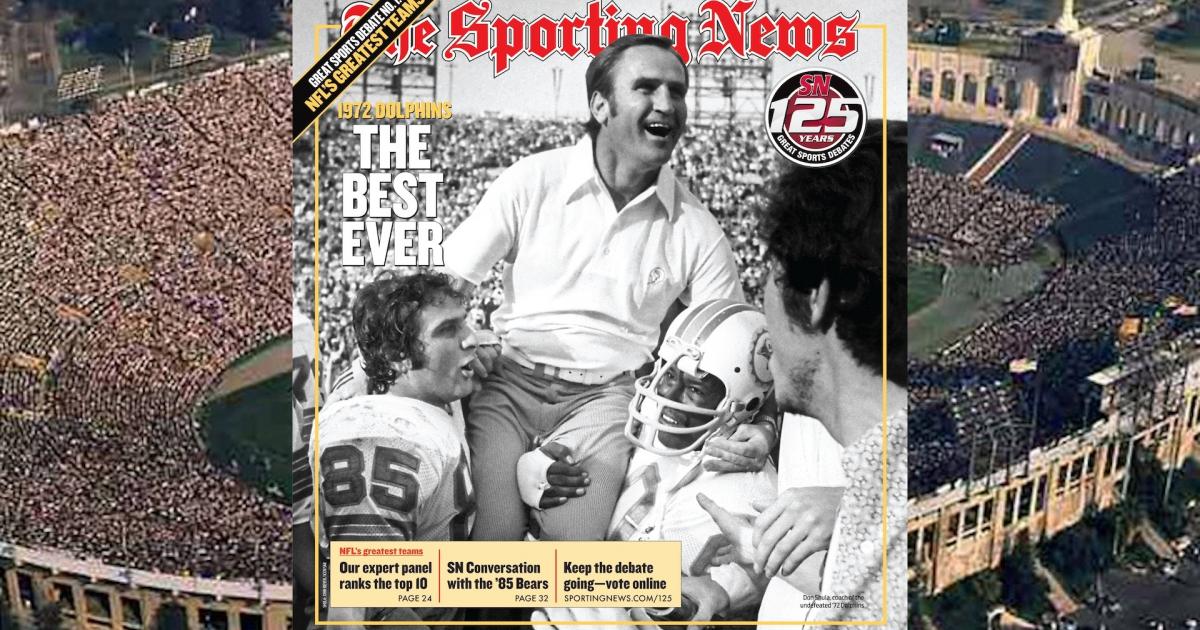 This story, by managing editor Lowell Reidenbaugh, first appeared in the Jan. 27, 1973, issue of The Sporting News under the headline, “Dolphin ‘No-Names’ Scale the Summit” after Miami defeated Washington, 14-7, in Super Bowl VII on Jan. 14 — 50 years ago this weekend — to finish 17-0, to this day the only time in the Super Bowl era that a team has finished undefeated.

LOS ANGELES, Calif. — Super Bowl VI was only days away when Tom Landry made his largest, if unintentional, contribution to the American sports lexicon.

“I can’t recall their names,” observed the Dallas coach in reference to the Miami Dolphins’ defensive unit, “but they are a matter of great concern to us.”

Landry’s foggy memory was translated into Miami’s “No Names Defense,” a sobriquet considered by many as too colorless, too uninspired for a group of superior craftsmen.

BUT WHEN A contest was begun to find a more glamorous handle, 11 Dolphins responded in righteous indignation. “We like it fine, amscray,” they chorused and went about their business of blunting land and air thrusts in comparative anonymity.

As the National Football League pursued its 14-game course in 1972, the Dolphin defense gained stature as the most proficient among the 26 clubs.

And the Dolphins won. They kept winning, 14 games in all, they won some more, defeating Cleveland and Pittsburgh en route to the American Football Conference title and their second consecutive Super Bowl appearance.

WHEN THE Dolphins faced the NFC champion Washington Redskins in the Los Angeles Coliseum the afternoon of January 14, their defensive platoon was still the “No Names” outside of Dade County and South Florida.

But when the last gun had sounded on Super Bowl VII and the Dolphins had defeated the Redskins, 14-7, names like Scott, Buoniconti and Fernandez, Den Herder, Stanfill and Anderson were guaranteed instant recognition in football households everywhere.

Football’s finest spectacle, returning to Los Angeles where it opened in 1967 with only 61,946 in the stands, attracted a capacity 90,182 this time, plus an estimated 75 million TV viewers in the 50 states, Puerto Rico and the Virgin Islands.

WHAT THEY saw was the AFC’s fourth victory in seven Super Bowls and the first for Miami Coach Don Shula, who failed twice previously, with Baltimore in 1969 and the Dolphins in 1972.

Without direct reference, Shula and his audience knew that the allusion was to the Dolphins’ unprecedented season record of 17 victories without defeat.

TO GAIN THEIR lofty pinnacle, the Dolphins bucked a lot of odds and converted a host of cynics.

There were frequent reminders that other clubs had gone through a season undefeated, that the Chicago Bears of 1934 and ’42 had swept aside all opposition until the title game, when disaster struck.

In 1934, the Bears bowed to the Giants, 31-13, after having beaten the same club earlier, 27-7. Eight years later, the famed Monsters of the Midway were outclassed, 14-6, in the finale by the Redskins, led by the incomparable Sammy Baugh.

Moreover, the point was made that the Dolphins had compiled their imposing record without facing a champion from the five other divisions and that, of their 14 victims, only two, the Giants and Kansas City Chiefs, boasted a record over .500, each with an 8-6 mark.

THE DOLPHINS swallowed hard, but never broke stride. Outplayed, 24-3, by Dallas in their earlier Super Bowl effort, they took the play away from the Redskins, one-point favorites, in convincing fashion.

The Dolphins struck first in the opening quarter following Mike Bragg’s 37-yard punt to the Miami 37. Six plays later, quarterback Bob Griese, who had spent much of the season on the sidelines because of a broken ankle, connected on a 28-yard pass play with wide receiver Howard Twilley for the first touchdown.

MORE: What’s next for Derek Carr?

Twilley faked a turn inside, cut outside and grabbed the ball on the five-yard line, dragging cornerback Pat Fischer into the end zone with him. Garo Yepremian converted as one second showed on the scoreboard.

“OBVIOUSLY,” SAID the 5-9 Fischer about the 5-10 Twilley’s TD, “our pass coverage was not very good. Griese hit him right on the numbers. Griese read our coverage extremely well throughout the game. We try to conceal our coverage when we double up on certain receivers, but Griese picked it up and always seemed to go to the receiver with single coverage.”

Midway through the second period, Griese connected on a 47-yarder with wide receiver Paul Warfield for an apparent touchdown, but a five-yard illegal procedure penalty on Marlin Briscoe nullified the play.

When the Redskins reeled off two first downs on their next possession, hopes grew among the thousands of Washington adherents that the dormant Redskin offense was ready to explode finally.

But their hopes were dashed when middle linebacker Nick Buoniconti picked off a Bill Kilmer pass on the Miami 41 and returned it to the Redskin 27.

JIM KIICK and Larry Csonka picked up three yards apiece. Then Griese, who completed six out of six first-half passes, pitched 19 yards to Jim Mandich, the tight end, who rolled out of bounds on the two. Kiick made one yard over right tackle, then submarined right guard for the TD. Again Yepremian converted, this time with 18 seconds left.

Kilmer, returning to the stadium where he had starred as a tailback for UCLA more than a decade earlier, engineered four first downs opening the second half as the Skins moved from their own 30 to the Dolphin 17.

Here the “No Names” stiffened. Two passes fell incomplete, Manny Fernandez sacked Kilmer for an eight-yard loss and Curt Knight, who had booted seven consecutive field goals in the playoffs, missed to the right from 32 yards out.

LATER IN THE period, after advancing from their own 17 to the Redskin five, the Dolphins bogged down when a Griese pass, intended for tight end Marv Fleming, was intercepted by safetyman Brig Owens.

The major thrust of that drive was a 49-yard scamper by Larry Csonka, the longest of the season by a Dolphin ball-carrier. The 237-pound running back, whose 112 yards for the day were seven short of Matt Snell’s Super Bowl mark, set for the New York Jets in 1969, broke several tackles in going from his own 35 to the Washington 16.

The Redskins’ longest sustained march of the 80-degree afternoon occurred in the fourth quarter. It ate up 81 yards on the ground and more than seven minutes on the clock.

FROM THE Washington 11, Kilmer guided his club to the Miami 10, mixing his air and ground attacks well and picking up five of the losers’ 16 first downs for the day.

The drive went dead when a Kilmer pass intended for Charley Taylor was intercepted by Jake Scott, who raced from three yards in the end zone to the Washington 48, a 55-yard return. Defensive end Bob Heinz threw a key block on Kilmer to spring Scott loose for a large chunk of real estate before he was tackled by Charley Harraway.

In five plays, the Dolphins moved to the 34, where Yepremian attempted a field goal. The kick was blocked by tackle Bill Brundige.

YEPREMIAN picked up the ball and attempted to pass. The football was batted into the air, grabbed by cornerback Mike Bass and carried 49 yards into the end zone. Knight’s extra point made the score 14-7 with 1:57 remaining.

The Redskins had one flickering chance in the final minute. However, two Kilmer passes fell harmlessly, a swing pass to Larry Brown lost four yards and then Kilmer, concluding all the Washington frustration for the afternoon, was sacked for a nine-yard loss by Bill Stanfill as time ran out and spectators swarmed onto the field.

George Allen, the Washington coach who once likened losing to dying, was not quite so severe in post-game comparisons.

“IT DOESN’T do any good to play the Super Bowl if you don’t win,” said Allen, who guided the Redskins to an 11-3 season record before playoff victories over Green Bay and Dallas. “Our problems were running. We thought we could run, but couldn’t.

“Miami used a controlled charge to stop us. We had hoped to throw in the area of Lloyd Mumpford (cornerback replacement for injured Tim Foley), but we had to run first, and we couldn’t do that.”

The Skins gained 141 net yards rushing, 72 of them in 22 carries by Larry Brown, the conference’s leading rusher during the regular season.

“We did not seem to have the spark we had against Green Bay and Dallas,” continued Allen. “You have to get adjusted to the carnival atmosphere of the game. I believe even our veteran team learned something.”

TWO PLAYS, Allen said, were particularly damaging to his “Over the Hill Gang.”

“The biggest play of the first half,” he said, “was our failure to cover the fumbled punt by Jake Scott.”

The fumble occurred when Scott was tackled by Ted Vactor, Dick Anderson recovering on the Washington 37. Six plays later, the Dolphins scored their first TD.

“The other play that hurt us,” added Allen, “was the ruling against (linebacker) Harold McLinton for slapping the ball.”

The action forced a fumble by center Jim Langer on a fourth-down punt on Miami’s 27 at the end of the Dolphins’ first series. McLinton recovered the ball, but an illegal procedure call restored possession to Miami.

“THEIR CENTER winds up when he snaps the ball,” explained Allen, “and Harold slapped it. We felt Langer picked up the ball. The officials ruled it our ball until one of them informed referee Tommy Bell of the penalty.”

Asked why the Redskins did not attempt an onside kick after scoring their touchdown, Allen said: “There was too much time remaining (2:07). You just try to kick deep, hold them and then maybe block the punt.”

What did Allen tell his defeated and dejected Redskins?

Across the way, in the Dolphin quarters, Paul Warfield and Marv Fleming were telling it for the new world champions.

“Maybe now,” said Warfield, “our critics will change their opinions of us.”

Added Fleming, a member of the Green Bay club that won the first two Super Bowls under Vince Lombardi,

“THIS IS without doubt the greatest team I’ve ever played with. It is better than the Packer champions. Why? Because the personnel is better. I have three Super Bowl rings now, but I will cherish this one most.

“This has been a very hungry team. The Packers were hungry, too, but not like this one. Coach Shula deserves a lot of credit for the way he handled this team. We never accomplished a perfect season in Green Bay. That’s why this is a better team.”