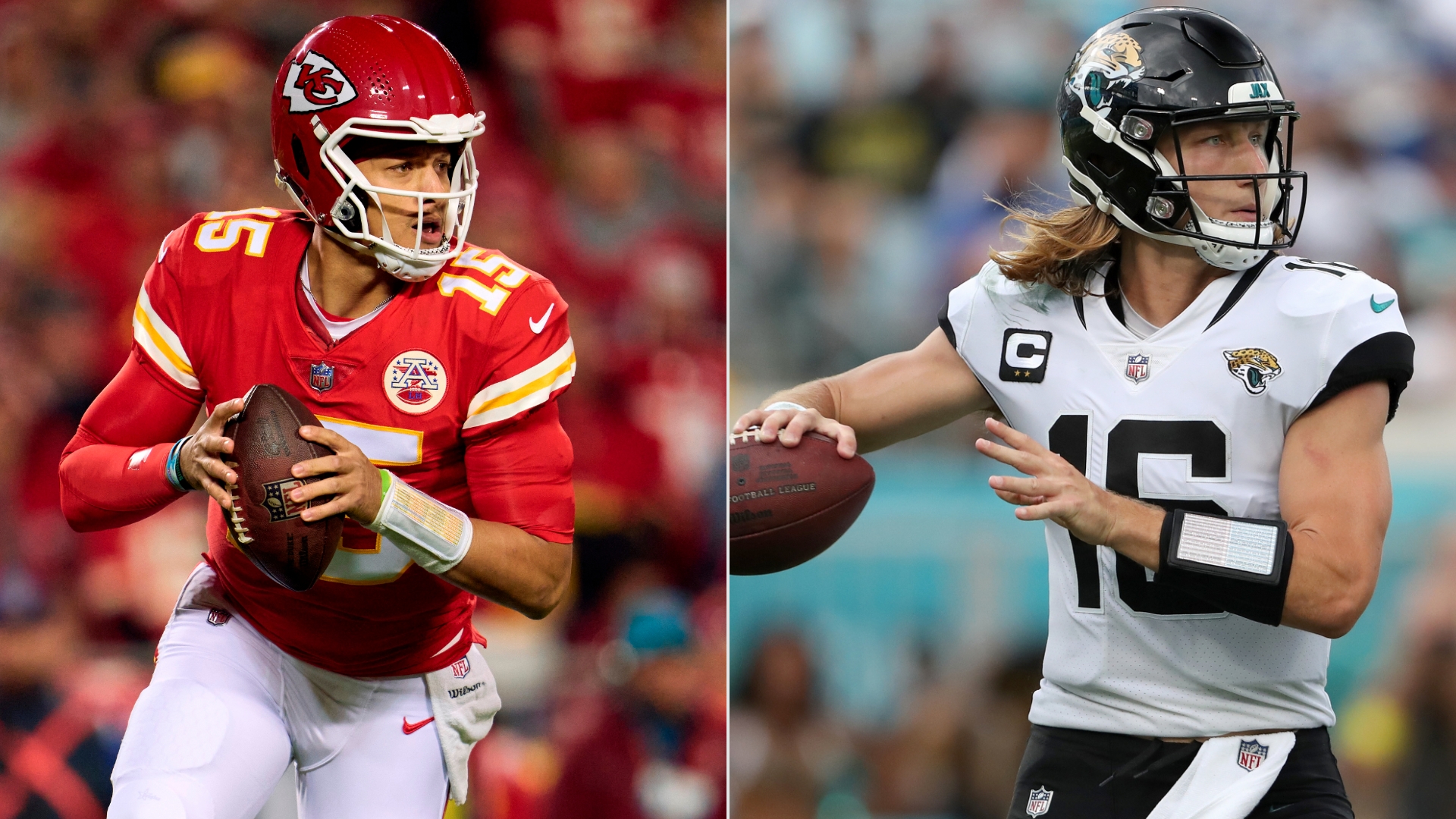 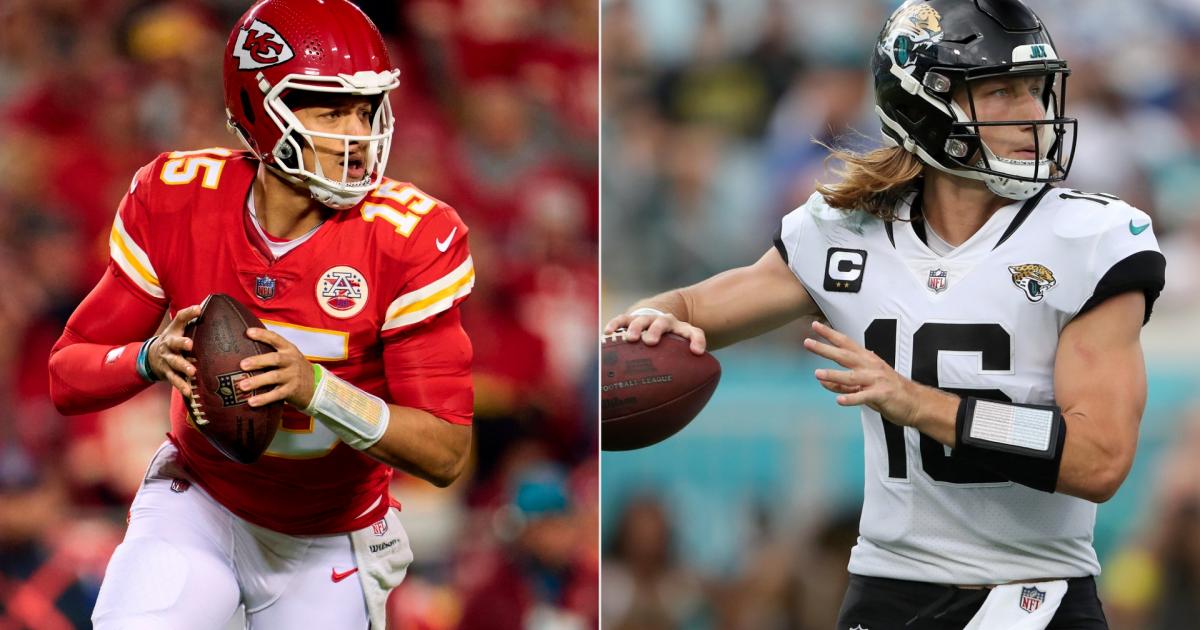 In the first matchup of the AFC divisional round, the top-seeded Chiefs (-8.5) host the fourth-seeded Jaguars at GEHA Field at Arrowhead Stadium (4:30 p.m. ET, NBC). Kansas City is attempting to return to its fifth consecutive AFC Championship game; Jacksonville is in search of its first AFC Championship appearance since 2017.

It took a historic, come-from-behind performance for the Jaguars to advance to the divisional round, as they climbed out of an early 27-0 first-half deficit to notch a last-second 31-30 win over the Chargers. Trevor Lawrence had a first half to forget with four interceptions, and he entered the final drive of the half with a 0.0 passer rating. Despite the rough start, he quickly made amends, bouncing back with a four-TD performance to help keep the Jaguars’ season alive. Considering the offense turned the ball over four times, Jacksonville’s defense did all it could to keep it within striking distance. The Jaguars’ defense held Los Angeles to just 4.6 yards per play and three second-half points, and another well-rounded defensive effort is a must against a Chiefs offense leading the league in EPA/play (0.179 EPA).

Kansas City got the week to rest up and prep, taking advantage of being the lone AFC team to get a bye for this season. Following its first-round win over Pittsburgh last year, the Chiefs narrowly defeated the Bills 42-36 in an all-time classic divisional showdown. They’re hoping for a less stressful divisional round game this year, and since they’re pegged as touchdown-plus favorites, there’s a good chance this year’s game goes a bit more smoothly. The last time the Chiefs were in action, they cruised to a 31-13 road victory over the Raiders. Like most games, the offense did essentially whatever it wanted, ending the game with an elite 0.29 EPA/play (94th percentile).

Kansas City also took care of Jacksonville in their lone meeting this season, notching a 10-point home win back in Week 10. The Chiefs jumped out to an early 20-0 first-half lead despite some miscues, but the Jaguars once again showed their resilience, competing for all 60 minutes. Can Lawrence and the Jaguars pull off a monumental upset to end the Chiefs’ AFC Championship streak?

Below, we’ll give you all the information you need before placing a wager on Chiefs-Jaguars, including the updated odds from BetMGM, tips, and our prediction for this divisional round matchup.

Back in Week 10, Kansas City closed as 9.5-point home favorites, narrowly covering with a 27-17 home victory. There’s a chance the Chiefs once again close as 9.5-point home chalk, as Kansas City always attracts public money. Additionally, the total closed at 51.5 back in Week 10 with the game going UNDER the number. Despite that result, the current total also sits at 53, as a higher-scoring rematch is likely.

The Chiefs lead the all-time series over the Jaguars 8-6. Kansas City’s currently riding a six-game winning streak, most recently defeating the Jaguars 27-17 in Week 10. Jacksonville’s last win against Kansas City came back in 2009 when David Garrard threw for 264 yards in a 24-21 victory. Saturday marks the first playoff matchup between these two foes, as well.

— Jacksonville’s been a money maker over the past month and a half, sporting a 5-1 ATS record over its past six games. It’s been an underdog in four of those six games and has gone a perfect 4-0 ATS as a ‘dog.

— Kansas City wasn’t a profitable ATS team down the stretch, covering in just two of its final six games in the regular season. The Chiefs were favored in all six games and went 5-1 straight up, but they couldn’t outperform the betting market.

— According to BetQL, “the Kansas City Chiefs are 11-1 straight up versus poor passing defenses allowing a completion percentage of 61 percent or worse this season.”

Jacksonville has one of the better defensive lines in the league and ended the regular season with the fourth-highest pressure rate (25.1 percent) while sporting PFF’s sixth-highest pass-rush grade (77.8). However, Jacksonville’s defensive line struggled against Kansas City earlier this season, as it was one of only two games where the Jags failed to record a sack. Their lack of sacks was mostly a result of only rushing four coupled with Patrick Mahomes’ elite ability to escape pressure, but if Jacksonville’s planning to drop seven back in coverage to limit explosive plays, it will need to generate natural pressure. The Jaguars will not make it to the AFC Championship if they end the game with zero sacks again.

The Chiefs’ defense hasn’t been efficient in the red zone, as it’s allowed a touchdown on 37-of-55 red-zone drives this season (67.3 percent), the second-highest rate in the league. With the Jaguars’ offense hitting its stride in the back half of the season (ninth-highest EPA/play since Week 9), it’s most likely going to manufacture a handful of red-zone trips. The Chiefs’ defense needs to limit the Jaguars to field goal attempts; otherwise, things could get interesting.

How aggressive will Jacksonville be?

Back in Week 10, Jacksonville successfully converted on an onside kick to start the game, as it knew it needed to be the aggressor if it wanted to notch a road win in Arrowhead. Knowing Doug Pederson’s aggressive nature, there’s a chance the Jaguars try more unconventional tactics in an attempt to create a spark. Kansas City’s defense likely knows Jacksonville might pull out some trick plays, but a well-executed trick play is still tough to defend.

-5. That was Jacksonville’s turnover margin in last week’s come-from-behind win over Los Angeles, which marked the first time in NFL playoff history that a team won a game with a minus-five turnover margin. Considering how tough it is to commit five turnovers in one game, it’s likely Jacksonville posts a better turnover margin this week, which should result in an even better offensive showing from the Jaguars.

The final score in their Week 10 contest (27-17) was a bit misleading, as Kansas City had its way for essentially the whole game. The Chiefs’ ability to keep Mahomes clean in the pocket should result in another double-digit home victory. Kansas City returns to its fifth-straight AFC Championship game and covers the spread in the process.