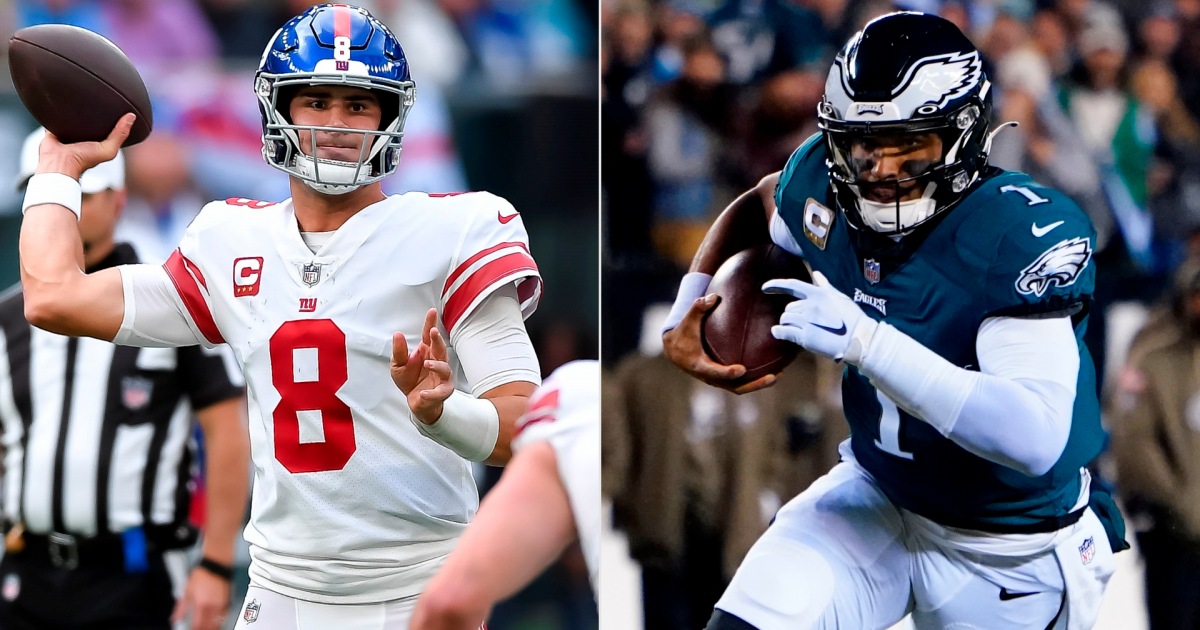 In the final game of Saturday’s divisional-round doubleheader, the Giants will travel to Philadelphia to play the first-seeded Eagles at Lincoln Financial Field (8:15 p.m. ET, FOX). New York is coming off an impressive 31-24 road win over the third-seeded Vikings last weekend in the wild-card round. As for the Eagles, this will be their second-straight postseason appearance under head coach Nick Sirianni. The Eagles have the first seed in the NFC playoffs after finishing the regular season with a 14-3 record and the NFC East crown.

The Eagles are looking for their unprecedented third-straight win over the sixth-seeded Giants after sweeping the two-game regular season series. These two division rivals played each other in the regular season finale, where the Eagles won 22-16 to clinch the top seed and the division title. The Giants did not play their starters in Week 18 as they were locked into their playoff spot. New York will hope for another upset win on Saturday night against one of the best teams in the NFC. Meanwhile, Philadelphia will look to make a deep playoff run after a successful regular season.

Below, we’ll give you all the information you need before placing a wager on Giants-Eagles, including the updated odds from Sports Interaction, tips, and our prediction for this NFC divisional round contest.

The Eagles are noticeable favorites heading into this weekend’s game against the Giants. However, bettors might not want to take Philly on the spread as they are only 8-8 against the spread this season. Meanwhile, the Giants have been one of the best cover teams on the road, as they are 7-1 ATS (including last week’s playoff game against Minnesota). Lastly, the total is set at 48, which is not horrible, as we saw when the Eagles had a healthy Jalen Hurts — they won 48-22 in Week 14 at MetLife Stadium.

The Eagles lead the all-time series against the Giants with a record of 92-88-2, with Philly winning the past three matchups. The last time these two NFC East teams played each other in the playoffs was in the 2008 NFL Divisional playoffs, where the Eagles defeated the Giants 23-11 at Giants Stadium. It was a defensive battle as Eli Manning and Donovan McNabb threw two interceptions a piece. However, McNabb had a rushing touchdown and one touchdown pass that went to Brent Celek in the fourth quarter. The Eagles also got three made field goals from kicker David Akers to help them advance to the next round.

Can the Eagles establish their ground game against the Giants?

If the Eagles want to win on Saturday night and move on to the next round, they will need to establish their running game immediately and not become too pass-happy. When Philadelphia crushed the Giants in Week 15, Hurts and Miles Sanders ran over New York’s defense for 221 yards and three rushing touchdowns. The Eagles also saw veteran running back Boston Scott get involved in the action, as he recorded 33 yards and a touchdown in six carries.

The Giants’ run defense did an excellent job last week against Vikings’ star running back Dalvin Cook, holding him to 60 yards on 15 carries. The Eagles cannot afford to fall into the same trap and become pass-happy against a defense that allowed 144.2 rushing yards per game (sixth-worst in the league) during the regular season. If the Eagles are willing to run the ball with Hurts, who returned in Week 18 from a shoulder injury, it will give them an added dimension to their offense and help out Sanders, who has played tremendously this season.

Jones had another monster performance against the Vikings’ defense last weekend as he did it all and helped lead the Giants to their first playoff win in 11 years. The former first-round pick completed 24-of-35 passes for 301 yards, two touchdowns, and had a game-high 78 rushing yards. It was a complete performance from the much-maligned starting quarterback, who has done a 360-degree turn under first-year head coach Brian Daboll.

Jones will now have to face an Eagles’ defense that led the league in sacks (70) and made life tough for him back in Week 15. In that matchup at MetLife Stadium, the 25-year-old quarterback completed 18-of-27 passes for 169 yards and a touchdown. Jones added a rushing touchdown but was sacked four times in the blowout defeat. The Giants’ offensive line will need to protect Jones on Saturday as they cannot afford to be in second and third long against this veteran defense.

One of the keys in Saturday night’s game will be how Philadelphia’s defense performs on third down against the Giants’ offense. Last week, Jones and Co. were outstanding on third down as they were 7-for-10 on third down, which helped them keep multiple scoring drives alive. The Eagles’ defense cannot let that happen, as this Giants’ team will take the air out of the ball.

This season, the Eagles were one of the better third-down defenses in the NFL, allowing opponents to convert at a 38.6-percent clip (ranked 14th in the NFL). However, that percentage goes down at home to 34.5 percent, which is great news for Philadelphia heading into their first playoff game. If the Eagles’ defense can force the Giants’ offense into a couple of early three and outs, it will go a long way toward the final result.

60. This was Hurts’ quarterback rating in his first playoff game last year against the Buccaneers. Hurts and the entire team struggled in their playoff debut, losing 31-15 on the road. The dual-threat quarterback completed 23-of-43 passes for 258 yards, a touchdown, and two interceptions. Hurts also recorded 39 rushing yards and was sacked twice. All eyes will be on Hurts Saturday, who has been one of the best QBs in the NFL this year and will be playing in his second game since injuring his shoulder last month. If Hurts looks and plays like the MVP candidate we saw during the regular season, the Eagles will give themselves a great chance to win.

In the regular season, the Eagles defeated the Giants by an average of 16 points. But Eagles fans should not expect a blowout on Saturday night. Daboll’s team loves to be the underdog and relishes in that role and will make things tough on the Eagles. However, the Eagles have played outstanding in front of their home crowd (7-2) during the regular season, giving them that added boost. The Giants will cover on Saturday night, but the Eagles come away with the win, thanks to Hurts and the defensive line.