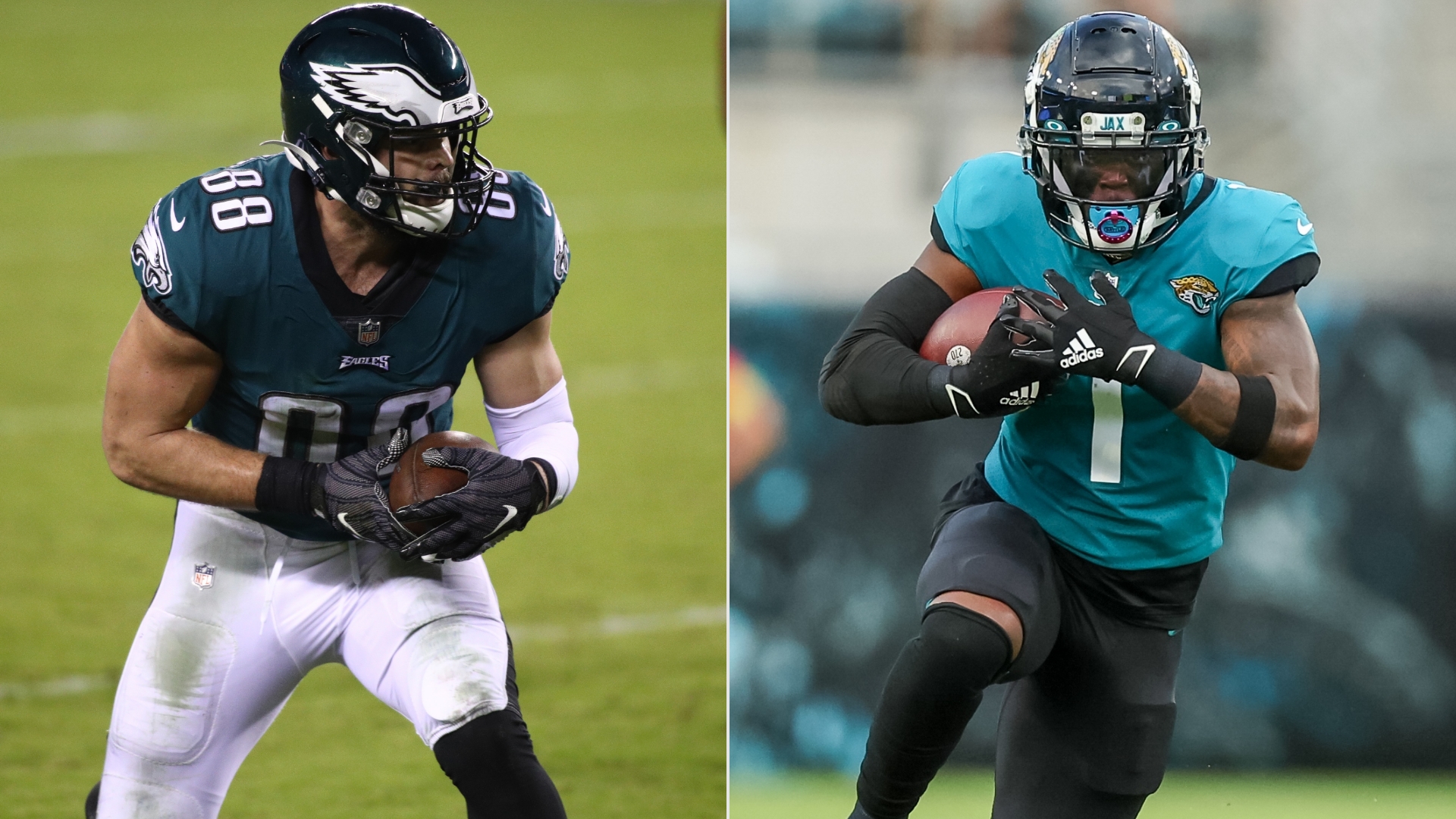 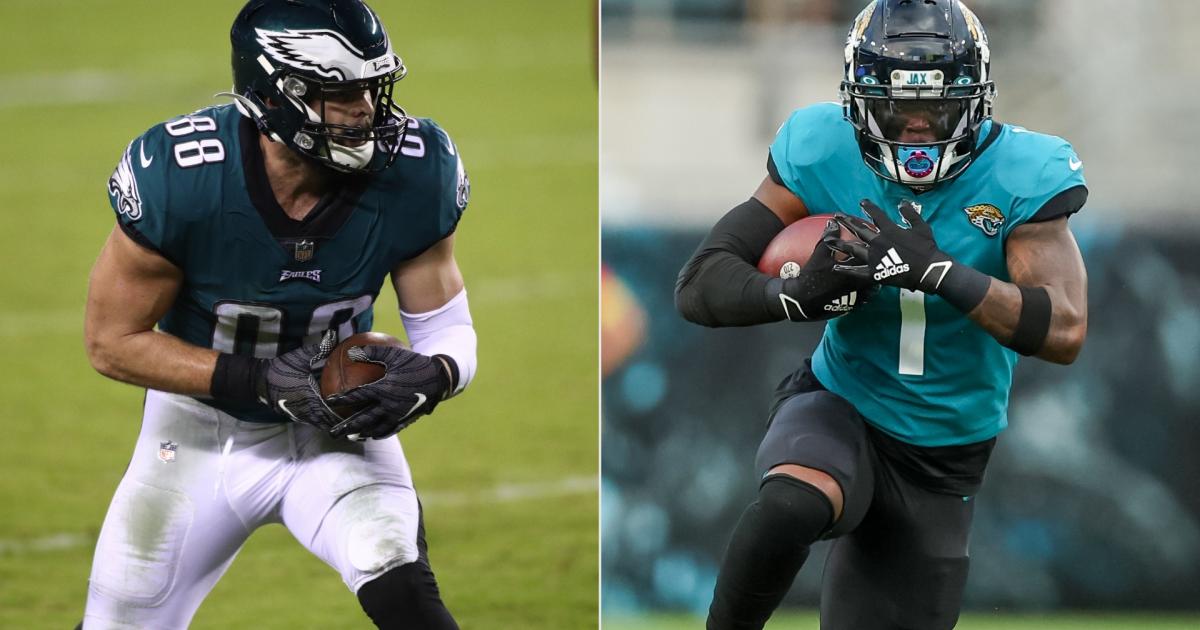 The NFL’s divisional playoff round kicks off on Saturday with both the AFC and NFC’s top seeds in action. First, the Chiefs host the Jaguars (4:30 p.m., ET, NBC), followed by the Eagles facing off against the Giants (8:15 p.m. ET, FOX). For DFS players opting to construct a Saturday-only lineup for the doubleheader, we’ve built a FanDuel roster that has the chance to lead daily fantasy players to some cash at the end of the night.

Before we break down all of our picks and strategy, here are the most notable scoring rules for FanDuel contests: four-point passing TDs and half-point PPR.

QB Patrick Mahomes, Chiefs vs. Jaguars ($9,200). Mahomes is always a safe play, as the likely MVP is always capable of racking up 300-plus passing yards while throwing multiple TDs. He should continue his elite play against a Jacksonville defense he dropped 31.14 FD points on back in Week 10. Jacksonville’s pass rush had trouble getting to Mahomes in that game, failing to record a sack. While the Jaguars’ defensive line has improved the past couple of weeks, the Chiefs’ offensive line has been one of the best in the league, allowing just a 4.8-percent adjusted sack rate (fifth in NFL).

RB Saquon Barkley, Giants @ Eagles ($8,500). Philadelphia’s defense has improved against the run over the back half of the season but they’re still not nearly as stout against the run (16th) as they are against the pass (first). While Barkley didn’t have much success in his lone game against the Eagles this season (28 rushing yards, two targets), he still sees enough usage to put together an effective fantasy day this time around. Barkley’s averaging 18.4 carries and 4.8 targets per game, so a 15-plus fantasy point effort is well within reach.

RB Travis Etienne Jr., Jaguars @ Chiefs ($6,800). Etienne’s another RB with reliable enough usage to mask the fact his team might be forced into a negative game script. Etienne’s likely to see at least 15 touches as the clear-cut lead back, and if Jacksonville’s able to hang around, a 20-to-25-touch day is possible. Etienne’s averaged 5.7 yards per touch (10th among RBs) and can rush for 100-plus yards while reaching paydirt, as well.

WR DeVonta Smith, Eagles vs. Giants ($7,400). Smith put together one heck of a regular season as the Eagles’ “No. 2” wideout, racking up 1,196 receiving yards (eighth among WRs) on a 27-percent target share (14th). He’s averaged 58.3 receiving yards and 0.5 TDs on 4.8 receptions through four career games against the Giants and could very well surpass those averages with Adoree Jackson likely shadowing A.J. Brown all night. Smith has a legit shot to lead all Eagles in receiving this week.

WR Kadarius Toney, Chiefs vs. Jaguars ($5,800). With Mecole Hardman (pelvis) already getting ruled “out,” Toney’s in line for a solid fantasy day against a Jaguars defense allowing the 24th highest drop-back EPA since Week 9 (0.078). Toney’s best fantasy showing of the season came against Jacksonville in Week 10 when he scored 17 FD points on four catches for 57 yards and a touchdown. Toney’s as shifty as they come, posting an absurd 56.5-percent juke rate, so as long as he gets the ball in his hands, he has a shot to do something special.

WR Justin Watson, Chiefs vs. Jaguars ($4,700). We’ll also roster Watson, as buying into the Chiefs’ league-leading offense is never a bad idea. Over the back half of the regular season, Watson consistently logged a snap percentage north of 60 percent, and with Kansas City’s passing offense being relatively dispersed, Watson could show out on the big stage. Watson sports a high 19.5 aDOT to go along with 14 deep targets, as it might only take one long reception for him to live up to his billing as a deep sleeper.

TE Dallas Goedert, Eagles vs. Giants ($6,300). Goedert had his best season yet in terms of his fantasy points per game, averaging a career-high 9.47 FD points per outing. He’s capable of putting forth a double-digit fantasy showing against a Giants defense allowing the seventh-most fantasy points to tight ends. New York’s defense most recently allowed 129 receiving yards on 10 receptions to Minnesota tight end T.J. Hockenson, and while we’re not expecting the exact same result from Goedert, he could still rack up 80-plus receiving yards on six-plus receptions.

FLEX Zay Jones, Jaguars @ Chiefs ($6,500). Jones’ wild-card performance (eight receptions, 74 yards, one TD) should entice DFS players to roster him in what could be a similar type of showing this week. Jacksonville’s likely to be playing from behind in the second half, resulting in the Jaguars attempting a high number of passes. Jones garnered 13 targets last week with Lawrence attempting 47 passes, and it’s certainly possible Jones see 10-plus targets for a second consecutive week.

DEF Philadelphia Eagles vs. Giants ($4,800). We’re expecting the Eagles to allow the fewest points between all four teams in action on Saturday, making them our preferred D/ST play. Philadelphia’s pass defense has done its thing all season, entering the divisional round allowing the lowest drop-back EPA (-0.087). Additionally, their pass rush is just as elite, sporting the second-best pressure rate (25.5 percent), and consistently getting pressure on Jones can hopefully lead to several sacks and turnovers.