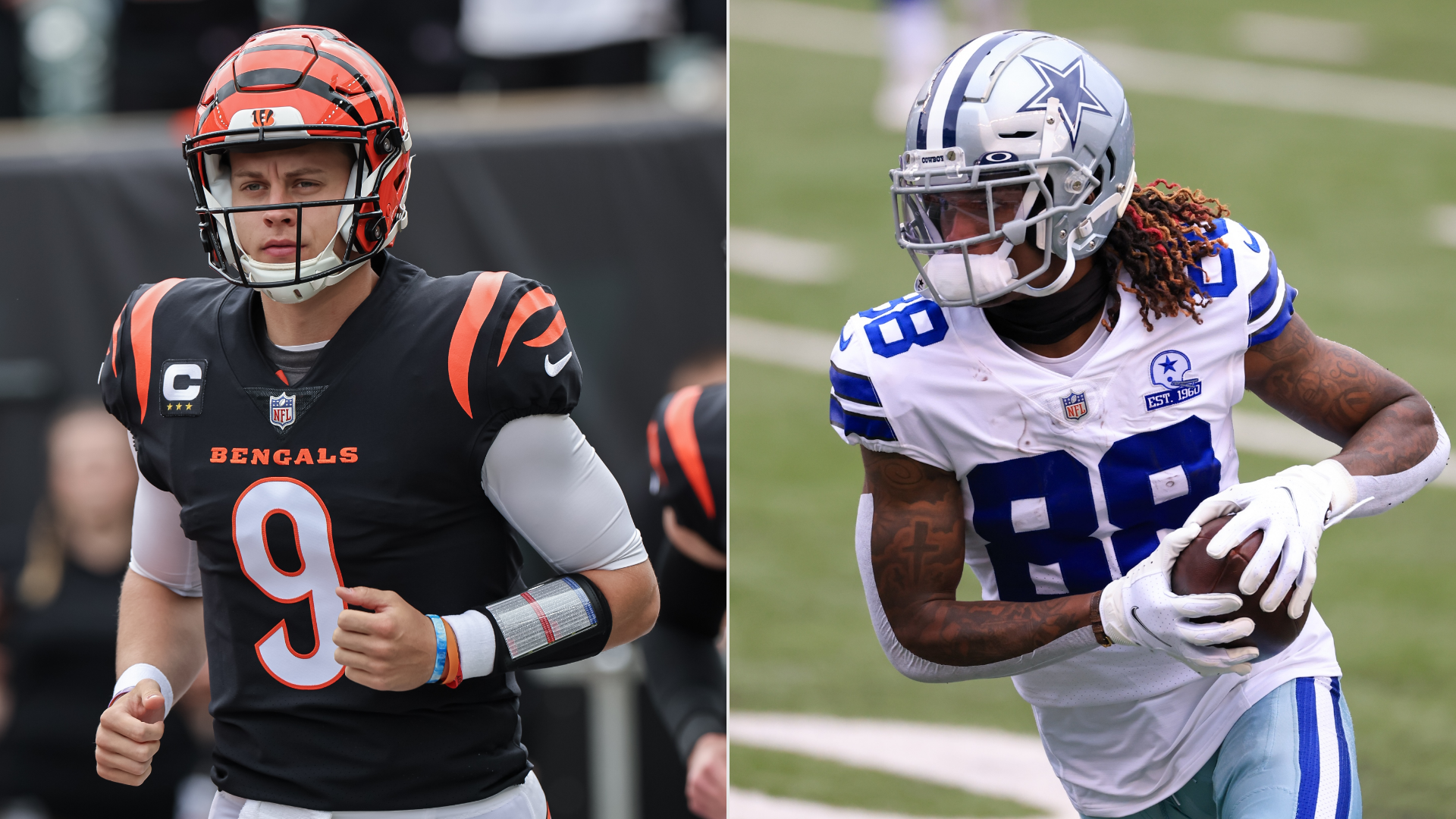 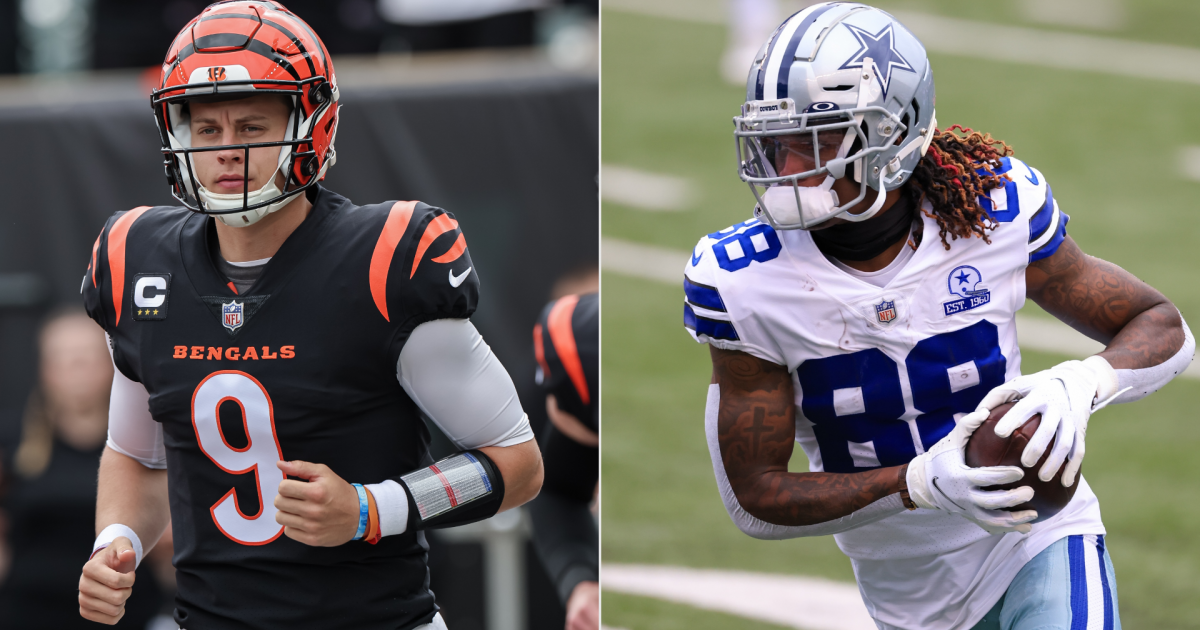 The divisional round of the 2023 NFL playoffs wraps up on Sunday, with two matchups beginning at 3 p.m. ET between Bengals-Bills and followed up by Cowboys-49ers at 6:30 p.m. ET. We have two fantastic games for Sunday’s slate, which will make it fun for daily fantasy football players to enter a few DFS tournaments. Our FanDuel lineup features an exciting Bengals’ QB-WR stack, a couple of standout wide receivers, and a rising tight end who has scored a touchdown in five-straight games.

Before we break down our picks and strategy, here are the most notable scoring rules for FanDuel contests: four-point passing TDs and half-point PPR.

QB Joe Burrow, Bengals @ Bills ($8,000). Burrow played well last week against the Ravens, scoring 21.26 FanDuel points in a seven-point win. The third-year quarterback will look to toss a couple of touchdowns against the Bills, who gave up 37 points to Miami last week. However, Buffalo’s defense allowed the seventh-fewest points FanDuel points to QBs (15.4) during the regular season. It’s not an ideal matchup for Burrow, but he has the weapons at the skill positions to make plays and put up some points on Sunday afternoon.

RB Christian McCaffrey, 49ers vs. Cowboys ($9,200). The star running back had no issues with Seattle’s defense last week, rushing for 119 yards on 15 carries and recording a receiving touchdown. If you had CMC in your lineup, he gave you 20.6 FanDuel points, which has become the norm since he joined the 49ers in November. McCaffrey is averaging 18.8 FanDuel points per game in 12 games with San Francisco. The veteran running back will now face a Cowboys’ defense that allowed the second-fewest FanDuel points to RBs (16.7) this season. This is another spot that’s not favorable for CMC, but with his skills, he can still find a way to score at least 15 points.

RB Tony Pollard, Cowboys @ 49ers ($7,100). Pollard was the best running back on the field last week, as he led both teams with 77 yards on 15 carries and had three receptions for 12 yards. Even though Pollard did not score a touchdown, he still found a way to produce 10.4 FanDuel points. The young running back has a tough matchup on Sunday against a 49ers’ defense that allowed the fewest FanDuel points to RBs (14.0) this season. We would shy away from Pollard if it was a regular-season game. However, given the limited options on the Sunday slate, he stands out as one of the highest-ceiling options.

WR CeeDee Lamb, Cowboys @ 49ers ($7,800). If the Cowboys want to win on Sunday night, they will need a monster performance from Lamb. Last week against Tampa Bay, the standout receiver had four receptions (six targets) for 68 yards and a touchdown (14.8 FanDuel points). Lamb has now scored 10 or more FanDuel points in five-straight games. He’s also averaging 17.8 FanDuel points per game and has four touchdowns over that period. We like Lamb to have another good outing on Sunday against a 49ers’ defense that has allowed the sixth-most FanDuel points to WRs (30.0) this season. If there’s a weakness that the Cowboys can exploit on Sunday in hopes of winning, it’s the 49ers’ secondary.

WR Tee Higgins, Bengals @ Bills ($7,000). Higgins started the playoffs slowly last week, catching four passes for 37 yards, but we know his ceiling is much higher against the Bills. Buffalo has allowed the eighth-most FanDuel points to WRs (29.2) and 18 touchdowns this season. With Ja’Marr Chase playing on the opposite side, this is a prime spot for Higgins to find the end zone and stack up some points with Burrow.

WR Brandon Aiyuk, 49ers vs. Cowboys ($6,500). Aiyuk was solid in last week’s win against the Seahawks, recording three receptions (five targets) for 73 yards and 8.8 FanDuel points. The former Arizona St. standout did not score a touchdown but could snap his two-game cold streak against the Cowboys on Sunday. Dallas’ defense has given up its fair share of plays through the air this season, allowing the fifth-most FanDuel points to WRs (30.3) and a league-high 22 TDs. Aiyuk should feast against the Cowboys and potentially have 10-15 FanDuel points.

TE Dawson Knox, Bills vs. Bengals ($5,800). Knox has become a top DFS option, as all he does is score touchdowns. Last week against the Dolphins, he had three receptions (five targets) for 20 yards and a touchdown (9.5 FanDuel points). Over his five-game TD streak, Knox is also averaging 12 FanDuel points per game. The 26-year-old tight end might not score a touchdown on Sunday, as the Bengals only gave up three to TEs during the regular season. However, it would not be a shock to see Knox have 50-60 receiving yards and four receptions, as the Bengals’ defense allows the ninth-most receiving yards to tight ends this season.

FLEX Hayden Hurst, Bengals @ Bills ($5,000). Sticking with the tight ends, Hurst almost scored a touchdown last week against the Ravens, but it was ultimately overturned. However, the vet tight end still had four receptions (six targets) for 45 yards and 4.5 FanDuel points. If you have Hurst into your DFS lineup, you are looking for him to be a factor in the middle of the field against a Bills’ defense that allowed the third-fewest FanDuel points to TEs (6.4). It’s not a great matchup on paper, but with the Bengals having an outstanding WR unit, Hurst will have opportunities in the passing game.

DEF Bengals @ Bills ($3,400). Our last play for Sunday’s slate will be the Bengals’ defense, who scored 13 FanDuel points last week against the Ravens. Cincinnati sacked Ravens QB Tyler Huntley twice, forced him into an interception, and returned a fumble for a touchdown. It was a complete performance by the Bengals’ defense, who will now have the tough task of facing Bills star QB Josh Allen. Allen had his turnovers issues last week against the Dolphins, which could potentially lend to another solid performance by the Bengals if those mistakes persist.