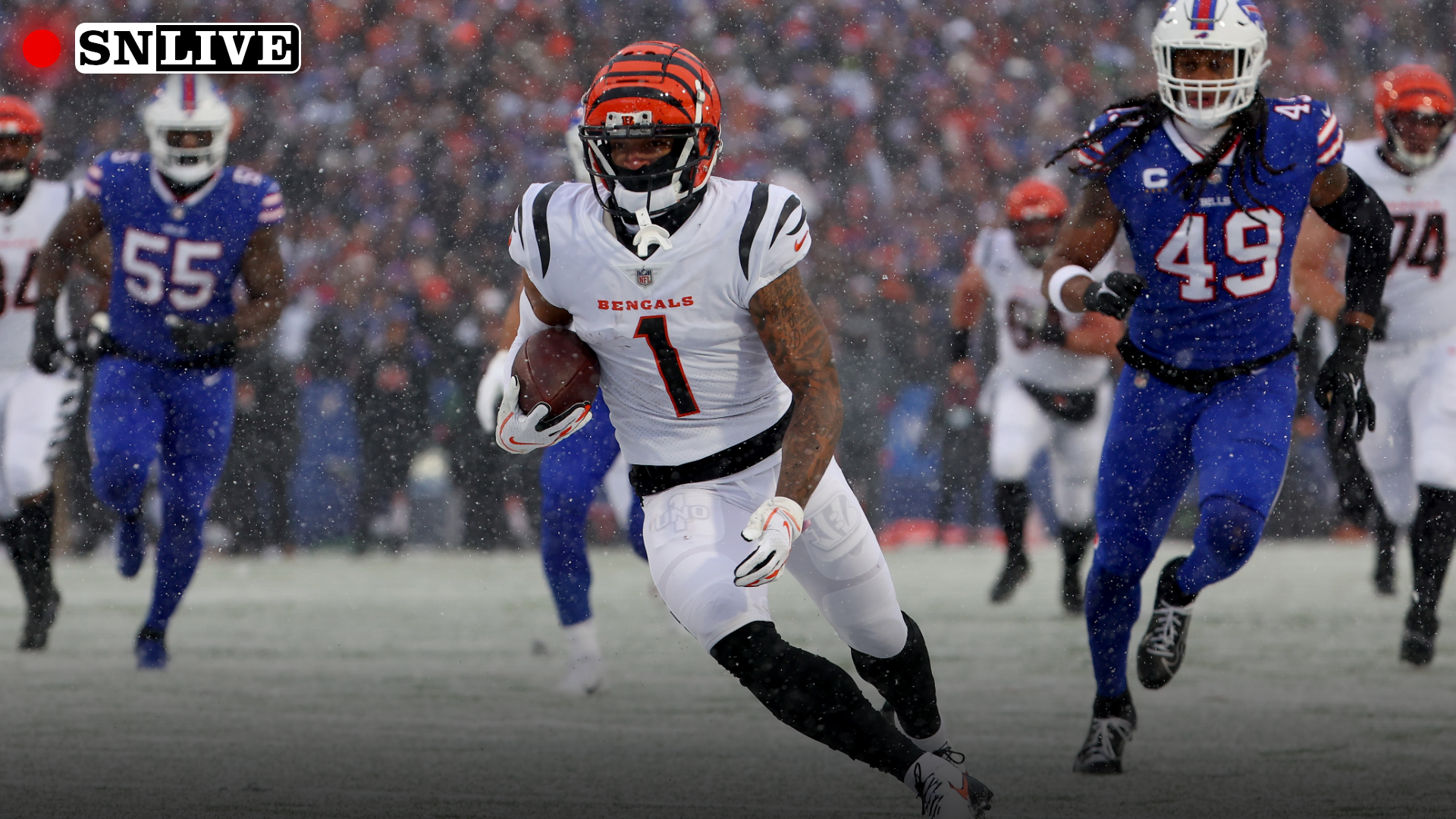 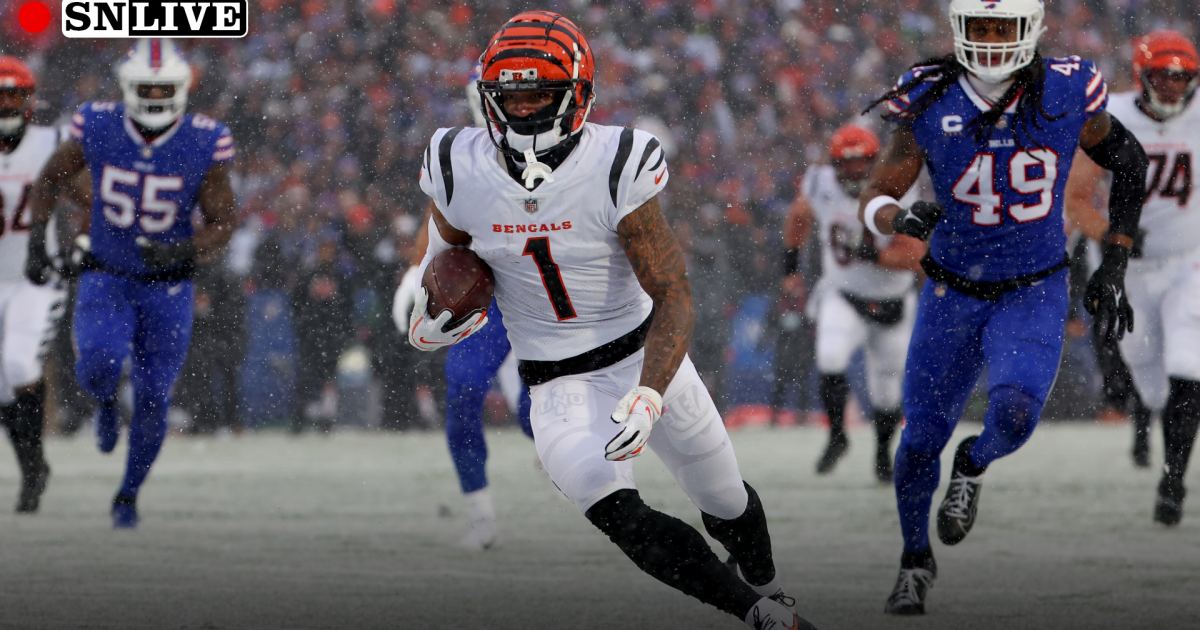 If last year’s divisional round was any indication, we could see something special on Sunday.

The talented class of young AFC quarterbacks delivered on this weekend last year, with Josh Allen and Patrick Mahomes going back-and-forth in a duel for the ages. Could we get Part II from Allen and Joe Burrow?

While both the Bills and Bengals enter with the goal of winning a championship in February, these teams do have some lingering questions.

The Bills underwhelmed in a narrow win over the Dolphins in the wild-card round, battling turnovers and letting a third-string quarterback do more damage than they likely expected. The Bengals, meanwhile, are missing three starters from their offensive line and needed a game-changing defensive play to escape the Ravens last weekend.

For all of the talent these two teams have — and all of the questions — the game might still come down to which quarterback has the better day. Allen and Burrow both have a chance to put the team on their back and manage one of the biggest wins of their young careers.

The Bengals have built up some goodwill after a surprise run to the Super Bowl last year, but the Bills are under real pressure to make progress after last year’s divisional round exit.

The Sporting News is tracking live scoring updates and highlights from Sunday’s divisional round game between Buffalo and Cincinnati. Follow along for all of the key moments.

5:29 p.m. FIELD GOAL — McPherson drills a 20-yard field goal attempt to make this a three-possession game. It’s going to take a mini-miracle for the Bills, and that won’t happen without a quick scoring drive here.

5:27 p.m. — Poyer and White were both able to walk off, luckily, but Poyer is back in the locker room. The Bengals are knocking on the door here, in search of another touchdown.

5:24 p.m. — Burrow throws to Higgins in the end zone and misses, but the Bengals pick up a big pass interference call on Tre’Davious White. Jordan Poyer’s helmet slammed into White’s facemask at the end of that play and both players are down. Scary collision.

5:22 p.m. — The tackling is pretty poor right now. Ja’Marr Chase should’ve been brought down for a short gain but instead picks up eight.

5:20 p.m. — The Bengals are getting anything they want on the ground right now. They’ve run the ball into Bills territory.

5:16 p.m. — The Bengals force a really quick punt. They can essentially put this game away with a long scoring drive here. Dangerous, dangerous territory for the Bills.

5:11 p.m. TOUCHDOWN — Mixon is in! The Bengals have a commanding two-touchdown lead with 1:17 left in the third quarter. All of the pressure is on Buffalo’s offense on this next drive.

After review… it’s a Cincy TD!

5:08 p.m. — Joe Mixon runs for the goal line and believes he’s in. The officials don’t agree, but the Bengals are challenging — and they might get this one overturned.

5:03 p.m. — Big run by Mixon, who takes it all the way down to the 5-yard line with the help of some great blocking. The Bengals are knocking on the door.

Hurdling through the snow

4:58 p.m. — Nice first down grab by Higgins. Burrow is slow to get up after taking a low hit on the next play.

4:57 p.m. — Nice run by Burrow, who is apparently faster than Gregory Rousseau. First down, Bengals.

4:49 p.m. — Stefon Diggs is out of the game right now with an apparent hand issue. That’s a big one to monitor. Meanwhile, Beasley picks up 12 yards on a first down catch to bring the Bills closer.

4:45 p.m. — Allen extends his arm for another first down. He’s used his legs on back-to-back plays, and it’s working right now.

4:43 p.m. — Allen escapes pressure and finds a wide open Shakir for 17 yards. The Bills are into field goal range with a chance for more.

4:42 p.m. — Some real tough runs by Devin Singletary early in this half. The Bills are across midfield after the latest.

4:25 p.m. — Burrow’s Hail Mary has the distance but doesn’t have a receiver. Incomplete. The Bengals go to halftime with a 17-7 lead.

4:24 p.m. — Burrow takes off for a big run but isn’t able to get out of bounds. Just two seconds left for a Hail Mary try.

4:23 p.m. — Cincinnati has picked up a pair of first downs but is running out of time at the end of the first half. 19 seconds left.

4:17 p.m. — The Bills have a holding penalty declined and are forced to punt on fourth down. The Bengals will start at their own 9-yard line and have 40 seconds to work with. Big stop by Cincinnati considering the Bills start the second half with the ball.

4:15 p.m. — Big third down conversion by the Bills, if only because it keeps the ball from going back to the Bengals with more than a minute left.

4:13 p.m. — What do you think? Either way, great play by Matt Milano to disrupt the catch and bring this all into question.

4:10 p.m. FIELD GOAL — McPherson drills the 28-yard field goal attempt, but that ending will sting for the Bengals. Buffalo has a chance to score here and open the second half with the ball.

4:09 p.m. — The call is overturned. No touchdown. Chase didn’t have possession, according to the officials.

4:08 p.m. — They’re reviewing whether Chase had control of the ball…huge call coming here.

4:06 p.m. — Wow! A tremendous throw by Burrow and a great catch by Chase in the back of the end zone for the score. The Bills couldn’t get the stop they needed.

4:06 p.m. — A false start pushes the Bengals back and is threatening to derail their chances of a touchdown.

4:04 p.m. — Burrow throws it away on second down. One more chance here before what you would expect to be a field goal attempt.

4:02 p.m. TWO-MINUTE WARNING — The Bengals have 2nd & Goal from the Bills’ 5-yard line. The big question, if Cincinnati can score here, is whether the Bills will have enough time to put together a scoring drive of their own.

3:58 p.m. — The Bengals are on the edge of the red zone after Samaje Perine gets a first down.

3:57 p.m. — Hayden Hurst with a first down and more for the Bengals. C.J. Uzomah was a difference-maker for Cincinnati in last year’s playoffs, and Hurst is filling that role well.

3:55 p.m. — Nice run by Mixon for 11 yards, but bad news for the Bengals’ offensive line as Ted Karras appears to be playing through a knee injury. Cincinnati is already down three starters.

3:50 p.m. TOUCHDOWN — Allen takes it in himself on third down, exchanges some words with Jessie Bates, and has the Bills right back in this game! 14-7, Bengals.

.@JoshAllenQB SNEAK! @BuffaloBills are on the board!

3:46 p.m. — The Bengals pressure Allen and pick up a holding call. That pushes the Bills back to the 31-yard line.

3:45 p.m. — James Cook comes up about a foot short on third down, but the Bills go for the quarterback sneak and pick up the first.

3:43 p.m. — A catch-and-run by Cole Beasley takes the Bills into field goal range. Allen is targeting a handful of different receivers on this drive.

3:42 p.m. — Nice catch by Gabe Davis while going to the ground. That takes the Bills to midfield. Buffalo is starting to establish a rhythm.

3:41 p.m. — The Bills manage their first 1st down of the game on the opening play of the second quarter as Allen finds Diggs for a nice gain.

3:38 p.m. — The first quarter ends with a sack by Vonn Bell. The story of the game might be shifting from the Bengals’ offense to the Bengals’ defense.

3:36 p.m. — The Bills get some pressure, and Matt Milano runs in to sack Burrow. Buffalo forces its first punt, and the offense is going to need a breakthrough on this next drive.

3:35 p.m. — 3rd & 7 coming for the Bengals after a short run by Mixon. Another massive moment for Buffalo’s defense to keep Cincinnati out of field goal range.

3:33 p.m. — Burrow converts with a 14-yard pass to Trenton Irwin. The Bills just can’t get Cincinnati off the field.

3:32 p.m. — There’s Burrow’s first incompletion, and it’s followed by another after Dane Jackson breaks up a pass to Chase. Big third down coming for the Bills’ defense.

3:29 p.m. — Trey Hendrickson wraps up Allen on third down, but Allen is able to toss it away for an incompletion. Disaster averted, but it’ll still be another punt for the Bills. Allen is 2-of-4 for 6 yards.

3:28 p.m. — The Bills open their drive with two runs for a total of five yards. They’re going to need to see Allen sling the ball around at some point.

3:26 p.m. — For all of the concern about the Bengals’ depleted offensive line, everybody is doing their job so far. Burrow is 9-of-9 for 105 yards and two touchdowns, and Mixon is averaging 6.8 yards per carry.

3:23 p.m. TOUCHDOWN — Burrow turns 3rd & 7 into a touchdown with a pass to Hayden Hurst in the end zone! Hurst got wide open, and Jordan Poyer was too late chasing him down. Bengals up 14-0.

3:18 p.m. — The Bengals are well into Bills territory after a wide open Tee Higgins grabs a first down. Buffalo needs to at least force a field goal attempt here to avoid falling in a big hole.

3:16 p.m. — A huge hole for Joe Mixon, who runs all the way to midfield. The run blocking has been strong for Cincinnati so far despite all of the injuries.

3:12 p.m. — Josh Allen overthrows an open Stefon Diggs on third down, so the Bills are forced to punt. Buffalo’s defense will have to make some adjustments on this drive.

Burrow to Chase is AUTOMATIC in the #NFLPlayoffs.

3:03 p.m. — Joe Mixon pushes forward for a first down on the Bengals’ second play. It’s hard to see the lines on the field, but he got there.

3:01 p.m. — The Bills won the toss and deferred, so Joe Burrow will start with the ball at snowy Highmark Stadium. The field is more white than green. Let’s do it!

2:58 p.m. — Damar Hamlin will be watching the game from a suite, so I’m not sure we’ll see him on the field. Cameras will certainly get more than a glimpse of him, though.

2:46 p.m. — There is snow coming down in Orchard Park! Could be a fun one if the snow sticks around.

2:25 p.m. — The Bills confirmed Damar Hamlin is in the building.

2:03 p.m. — CBS’ Tracy Wolfson says Damar Hamlin is in the Bills’ locker room, fueling speculation that Hamlin will make an appearance less than three weeks after his collapse against these Bengals.

1:56 p.m. — It’s 33 degrees in Buffalo, which qualifies as football weather but isn’t anything the Bengals haven’t seen. Snow could be a factor today as well.

Bills vs. Bengals will kick off at 3 p.m. ET from Highmark Stadium in Orchard Park, N.Y.

What channel is Bills vs. Bengals on today?

The divisional round matchup between the Bills and Bengals will be broadcast nationally on CBS, with Jim Nantz (play-by-play), Tony Romo (color analyst) and Tracy Wolfson (sideline reporter) working the game.

Streaming options for the game include Paramount+ and fuboTV, which offers a free trial. Canada viewers can watch the game with a DAZN subscription, which includes every NFL game.