Canada’s Brooke Henderson shot a two-under final round to complete a wire-to-wire victory in Florida; England’s Charley Hull finished in a tie for second after an eventful three-under final round; World No 2 Nelly Korda finished fourth 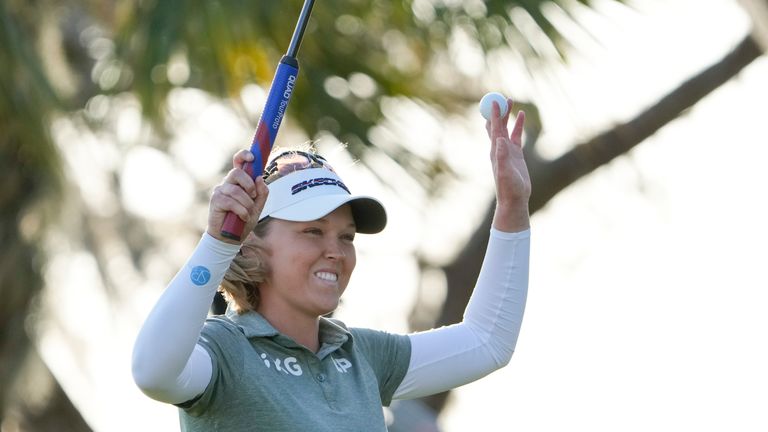 Brooke Henderson played a solid final round to hold off England’s Charley Hull for a wire-to-wire victory at the LPGA’s season-opening Tournament of Champions on Sunday in Orlando, Florida.

The 25-year-old Canadian was the solo leader after each round, owning a four-shot edge after just two rounds and cruising to the finish line at 16-under 272 at Lake Nona Golf & Country Club.

Her two-under final round completed a third career wire-to-wire win and her 13th LPGA title. She placed second at this event last season.

Henderson finished four strokes better than Hull and Sweden’s Maja Stark, each of whom shot a final-round 69 to tie for second at 12 under.

“I always try to win a couple times each year, so to get one right away right out of the gate takes a little bit of pressure off,” Henderson said on NBC. “I just love playing out here on the LPGA Tour against the best in the world every week.”

Henderson birdied the par-five second hole by setting herself up for a short putt with a long chip across the green. Her only bogey of the day came at the par-three sixth, but she bounced back with birdies at the par-five ninth and 15th.

Henderson struggled with back pain last season but still won two events, including the Evian Championship, the fifth and final major of the season. She also had her wisdom teeth removed over the winter and swapped out all of her equipment.

“There definitely was a lot of patience involved, especially early on in the offseason,” Henderson said. “A lot of big changes, a lot of things, but it couldn’t have worked out any better.”

The No 7 player in the world rankings was not seriously threatened Sunday.

Hull’s hopes were all but ended by a double bogey at the par-three sixth, but she quickly recovered with a birdie and eagle in her next three holes.

Three birdies and two further bogeys followed on an eventful back nine for Hull, who finished her round three-under.

Stark bogeyed three of her first seven holes before recovering with six birdies over her final 10.

World No 2 Nelly Korda entered the day tied for second, three shots behind Henderson, but she managed only a par 72 with three birdies and three bogeys. She placed fourth at 11 under.

“I was hitting it really well with my driver. I just wasn’t executing my shots well,” Korda said. “I was leaving myself really long putts typically I wouldn’t, and then I kind of double crossed a couple this week, which I don’t remember the last time I did that, in a left-to-right wind.

“So lots to work on and I’m pretty excited about it, actually.”

Former tennis player Mardy Fish won the tournament’s celebrity competition for the fourth time. He scored a 35 Sunday in the Modified Stableford scoring system and finished with a four-day total of 152.

Get the best prices and book a round at one of 1,700 courses across the UK & Ireland