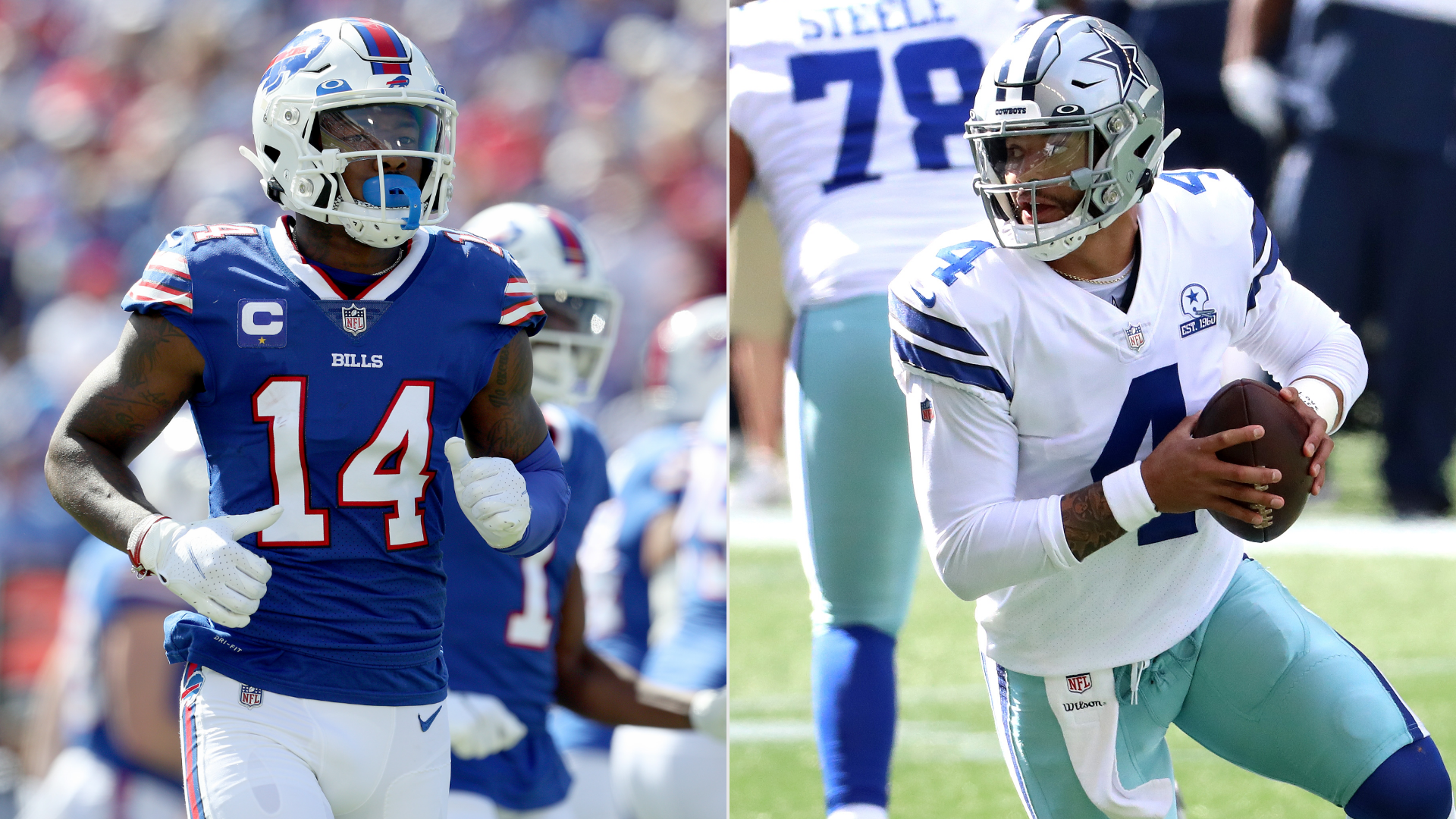 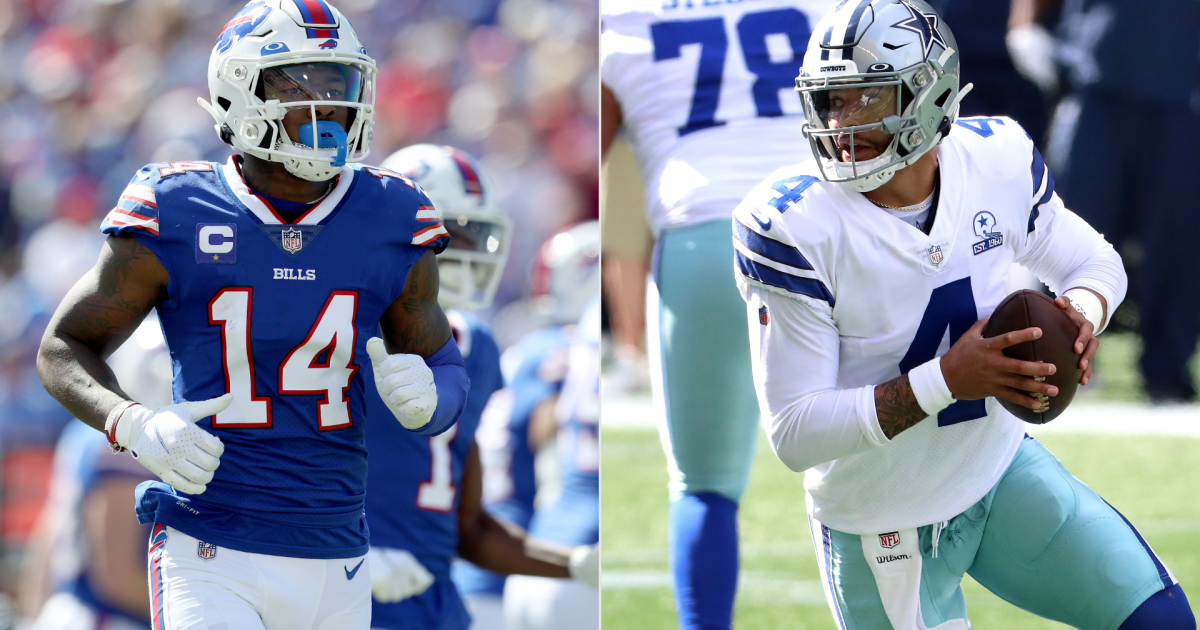 The divisional round continues on Sunday with a doubleheader, starting at 3 p.m. ET with the Bengals and Bills, followed by the Cowboys and 49ers at 6:30 p.m. ET. Even though we only have two games to pick from, individual daily fantasy football players will have a ton of potential stud and sleeper picks to build their lineup around. Our Sunday-only DraftKings lineup features a few big stars and a couple of value sleepers who could make or break our chances at cashing in NFL DFS playoff tournaments.

We built our lineup around a star-studded Cowboys’ stack and multiple sub-$6K sleepers who could provide production and value at the RB, WR, and FLEX spots.

Before we break down all of our picks, here are the most notable scoring rules for DraftKings contests: Full-point PPR, four-point passing TDs, three-point bonuses for 100 rushing yards, 100 receiving yards, and 300 passing yards.

QB Dak Prescott, Cowboys @ 49ers ($6,100). Prescott had one of the best performances in his career last week against the Buccaneers in the wild-card round. The veteran quarterback completed 25-of-33 passes for 305 yards and four touchdowns. Prescott also produced 24 rushing yards and a touchdown, giving him 39.6 DraftKings points. The last time the vet signal-caller had a 30-point performance was against the Eagles in Week 16 (32 DraftKings points). Despite his outstanding performance last week, Prescott will be low-owned as DFS players opt to start Joe Burrow or Josh Allen. Prescott will have a tough matchup on Sunday evening as the 49ers’ defense allowed the fifth-fewest DraftKings points to QBs (15.3) this season. We are going to bank on Prescott to play a clean game and throw a couple of touchdown passes against this San Fran defense.

RB Joe Mixon, Bengals @ Bills ($6,500). Mixon had a quiet outing last week against the Ravens, with 56 yards of total offense on 14 touches for 8.6 DraftKings points. If the Bengals want to win Sunday and advance to their second-straight AFC title game, they will need Mixon to be a factor and play better. The vet running back will be facing a Buffalo defense, which has allowed the 12th-fewest DraftKings points (21.6) to RBs during the regular season. The Bills did an excellent job of holding the Dolphins’ running game to 42 yards and a touchdown last week. It will be tough for them to do the same thing to Mixon, who can have a 100-yard rushing game or 100 total yards.

RB Elijah Mitchell, 49ers vs. Cowboys ($4,700). The second-year running back was a non-factor in last week’s wild-card win over the Seahawks but scored 10.7 DraftKings points. Mitchell had 27 total yards on 11 touches and a touchdown. He could not get anything going against one of the NFL’s worst run defenses and will try to bounce back against the Cowboys on Sunday. The Cowboys’ defense held Leonard Fournette and Rachaad White to 52 rushing yards but allowed 129.3 yards per game during the regular season. If Mitchell can get nine or more carries on Sunday, we expect him to have at least 50 rushing yards.

WR Stefon Diggs, Bills vs. Bengals ($7,700). The star wide receiver shined in last week’s three-point win over the Dolphins. Diggs had seven receptions (nine targets) for 114 yards and 21.4 DraftKings points. It was the second straight week that the veteran pass catcher had 20-plus DraftKings points and over 100 receiving yards. He might have a tough time picking up 100 yards as the Bengals’ defense allowed the 11th-fewest receiving yards to WRs this season. However, with Gabe Davis playing well, the star receiver could have a few 1-on-1 matchups against Eli Apple or rookie Cam Taylor-Britt.

WR CeeDee Lamb, Cowboys @ 49ers ($7,300). The third-year wide receiver did what he had to do in last week’s win against the Buccaneers, recording four receptions (six targets) for 68 yards and a touchdown. He also scored 16.8 DraftKings points, making it the fifth-straight game the young wideout scored double-digit DraftKings points. He will try to make it six-straight games against a 49ers defense that allowed the fourth-most DK points to WRs this season (37.8) and 16 receiving touchdowns. Last week, we saw San Francisco’s defense have trouble with Seahawks star WR DK Metcalf, who produced 10 receptions for 136 yards and two touchdowns. It would not be a surprise to see Lamb have a similar performance on Sunday evening.

WR Deebo Samuel, 49ers vs. Cowboys ($5,900). The versatile wide receiver dominated the Seahawks’ defense last week to the tune of 165 total yards and a touchdown on nine touches (31.5 DraftKings points). If you are a 49ers fan or had Samuel in your lineup, you loved seeing him look like the explosive playmaker we saw earlier this season. Samuel has a favorable matchup on Sunday evening against the Cowboys’ defense, which allowed the sixth-most DK points to WRs this season (37.4) and the most touchdowns to the position (22). If San Francisco can establish their ground attack on Sunday, it will help rookie Brock Purdy get the ball to Samuel, Brandon Aiyuk, and George Kittle.

TE Dawson Knox, Bills vs. Bengals ($3,800). The 26-year-old tight end has been playing out of this world over the past month and will be someone to watch out for in Sunday’s game against the Bengals. Knox had three receptions (five targets) for 20 yards and a touchdown (11 DraftKings points) against the Dolphins last week. Knox has now scored a touchdown in five-straight games. The former Ole Miss standout will face a Bengals’ defense, which has good linebackers but allowed the 13th-most DK points to TEs (12.7) this season.

FLEX Gabe Davis, Bills vs. Bengals ($4,800). Big game Gabe showed up last week for the Bills, recording six receptions (nine targets) for 113 yards and a touchdown (26.3 DK points). The last time Davis had 20 or more DraftKings points in a game was in Week 10 against the Vikings (21.3), where he posted six receptions (10 targets) for 93 yards and a touchdown. The Bills will look for another big postseason moment from Davis against the Bengals’ defense on Sunday afternoon, which allowed the 10th-fewest DraftKings points to WRs (32.0) this season.

DEF Bills vs. Bengals ($2,900). The Bills’ defense must get pressure on Burrow and the Bengals’ banged-up offensive line if they want to win on Sunday. Last week, Buffalo gave up 25 points to Miami but racked up four sacks and two interceptions for eight DraftKings points. The Bills should be able to get constant pressure on Burrow, who was sacked four times last week by the Ravens. In their past five games, Buffalo’s D/ST posted 10 DraftKings points per game and had four games with two or more sacks.