Why Rui Hachimura is a perfect fit on Lakers next to LeBron James, Anthony Davis and Russell Westbrook 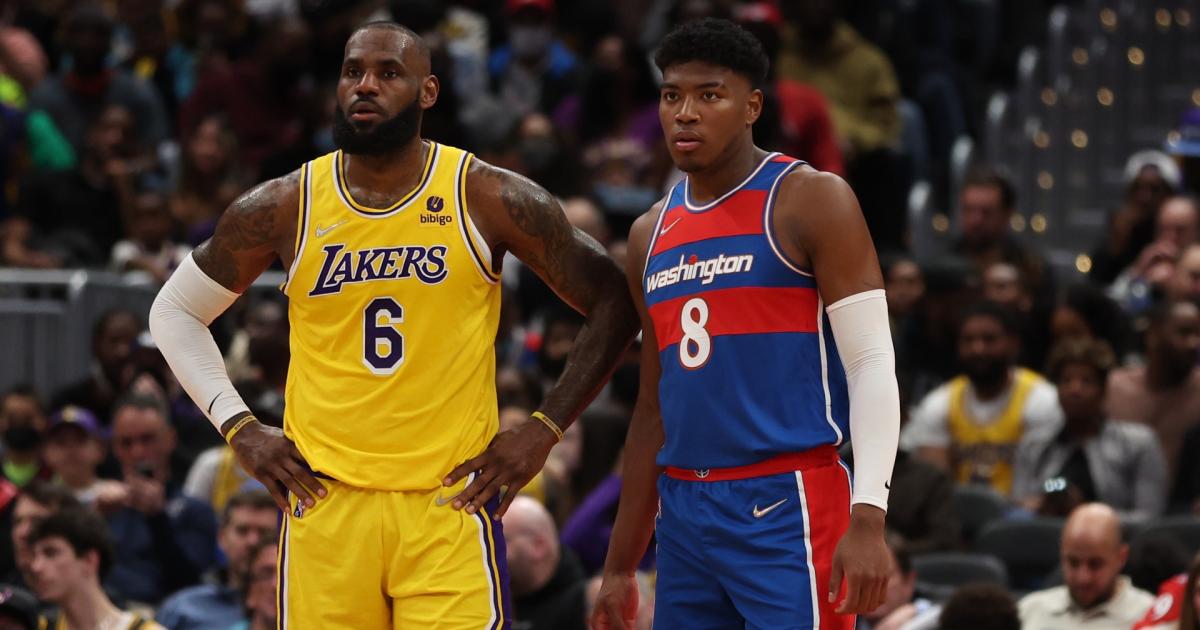 Trade speculation has swirled around Rui Hachimura for weeks.

Finally, the former top-10 pick has a new home after the Lakers picked him up in exchange for Kendrick Nunn and three second-round picks.

Perhaps this isn’t the slam dunk blockbuster that Lakers fans were hoping for — Rob Pelinka continues to dangle their highly coveted 2027 and 2029 first round picks — but there is plenty to suggest this trade is a legitimate needle mover.

Hachimura checks a number of vital boxes for a talent-starved roster still hanging around in the playoff race. How exactly will he fit in with Los Angeles’ trio of LeBron James, Anthony Davis and Russell Westbrook?

Let’s break it down.

The Lakers are obviously in desperate need of shooting help. They rank dead last in made 3’s per game and are 26th in percentage, hitting only 33.7 percent as a team.

At first glance, Hachimura doesn’t look like he could help too much in that department. He has been in the midst of a recent shooting slump that has dropped his 3-point percentage down to 34 percent. But he may be in line for some positive regression towards the mean. He hit a scorching-hot 45 percent of his 3’s last season and is at a solid 36 percent for his career.

Dive a little bit deeper into Hachimura’s numbers, and there’s even greater cause for optimism. He’s been stellar on his wide open looks. Per NBA stats, he’s hit 42 percent of his 3’s with six or more feet of space. Last season he was even better, hitting 46 percent of those shots. And he’s been a 41 percent 3-point shooter on catch-and-shoot looks over the past two years.

Hachimura wasn’t getting a ton of those open looks with the Wizards. The team was ranked 28th in percentage of wide open 3’s generated at the time that the trade news broke, partially because they’ve had below-average point guard play throughout his tenure. This season, Delon Wright has passed the ball the most to Hachimura. Last year, that player was Ish Smith.

Hachimura is going from those two mediocre playmakers to LeBron James, one of the best passers of all-time. LeBron will get Hachimura the highest-quality looks that he has ever had in his career.

Hachimura is also a great play finisher. This season, he’s hit 74 percent of his shots in the rim, a top-10 mark for forwards in the league. LeBron is elite at getting out in transition and hitting players cutting to the rim for layups. Those should be easy areas for Hachimura to add to his scoring output.

Hachimura is capable of giving LeBron breathers and propping up a second unit that has had no offensive juice. Per Basketball-Reference, the Lakers’ offensive rating with LeBron on the court has been a solid 117.8, which would be a top-four mark if carried over for the course of a season. But when LeBron sits, their offensive rating has dropped to 109.6, which would be the lowest number in the league.

Hachimura is an elite midrange shooter that can create his own offense, solving that issue for the Lakers. His 1.17 points per possession in isolation is in the 92nd percentile of all players in the league, better than any player on the Lakers’ roster.

If you could pair any big man to fit with Hachimura, Davis would be near the top of the list.

Hachimura’s most glaring weakness thus far in his career has been his lack of defensive impact. While he has great size and length at 6’8″ with a 7’2″ wingspan, he isn’t particularly good at protecting the rim and can get lost off the ball. He also struggles with his technique and positioning.

Davis is one of the best players in the league at cleaning up those types of mistakes. He was having a renaissance season, in line to be the potential Defensive Player of the Year before injuring his foot on Dec. 16.

Davis has also been willingly playing more center this season. That should give Hachimura an opportunity to slide into his best position at power forward.

Hachimura also will get a chance to reunite with his former Wizards teammate Westbrook. Those two built a good relationship back during the 2020-21 season. Hachimura used to refer to Westbrook as his senpai, or senior leader in Japanese. Wesbtrook even imparted lessons on Hachimura that he could use in the middle of games.

1) Rui Hachimura turns the ball over in the post
2) Westbrook pulls him aside in huddle and coaches him up
3) His first play out of the timeout, Rui applies the teachings to similar situation and gets free throws pic.twitter.com/3aq1SgDydq

Westbrook had good chemistry with Hachimura on the court in Washington. Hachimura was Westbrook’s second-favorite passing target behind Bradley Beal. Hachimura should benefit from the attention that Westbrook still gets on drives and be able to finish at the basket for easy layups.