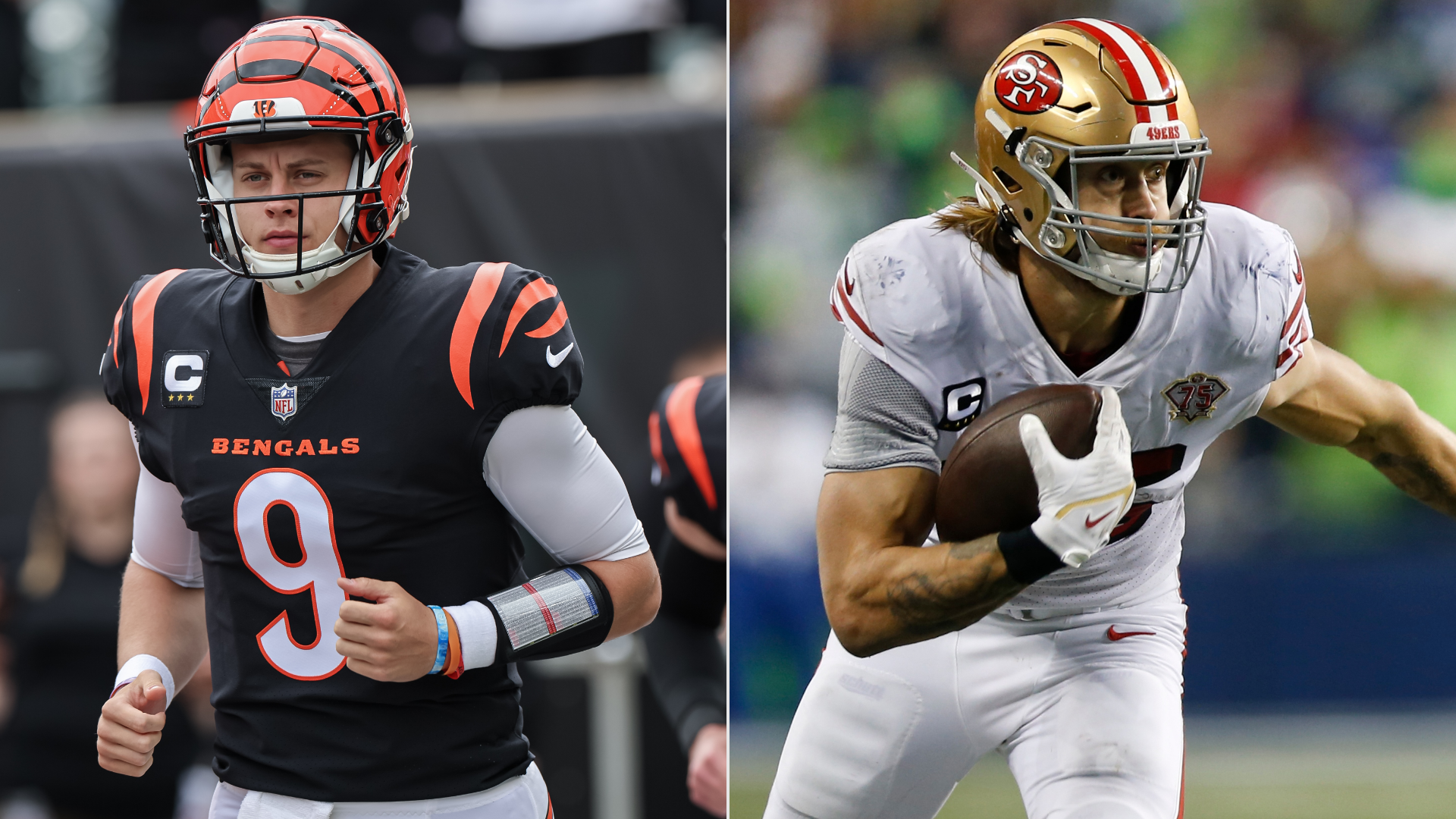 After another week of exciting playoff action, conference championship Sunday is finally here. With two great games on the slate (Eagles-49ers, Bengals-Chiefs), NFL DFS players will have opportunities to build interesting and competitive lineups despite the relatively small pool of players. Our DraftKings lineup features a few big stars and a couple of value sleepers who could end up making or breaking our chances at cashing in daily fantasy football tournaments.

Before we break down all of our picks, here are the most notable scoring rules for DraftKings contests: Full-point PPR, four-point passing TDs, three-point bonuses for 100 rushing yards, 100 receiving yards, and 300 passing yards.

QB Joe Burrow, Bengals @ Chiefs ($6,800). The third-year quarterback dominated the Bills last week, scoring 20.8 points and leading the Bengals to an impressive 27-10 win. Burrow will now try to build off that performance and defeat the Chiefs for the fourth-consecutive time over the past two seasons. In the Bengals’ last meeting against the Chiefs in Week 13, the former LSU standout completed 25-of-31 passes for 286 yards and two touchdowns. He added 46 yards on the ground and a rushing touchdown, giving him 30 DraftKings points. In the regular season, the Chiefs allowed the fourth-most DK points to QBs (21.3). With the Chiefs’ defense liable to give up some big plays in the passing game, we need to take Burrow in this spot.

RB Isiah Pacheco, Chiefs vs. Bengals ($5,300). With Patrick Mahomes dealing with a high ankle sprain, we could see a ton of Pacheco and Jerick McKinnon on Sunday evening. Last week, Pacheco crushed it on the ground with 96 yards on 12 carries against the Jaguars. The rookie has scored 10 or more DK points in four-straight games, which includes the divisional round game. In the Chiefs’ first matchup against Cincinnati in Week 13, Pacheco had 66 yards and a touchdown on 14 carries. He also had two receptions for 16 yards (16.2 DK points). Last week, we saw the Bengals hold the Bills to 63 rushing yards as a team, so it’s not an ideal matchup for Pacheco, but we know Andy Reid and Co. will not shy away from running the ball.

RB Miles Sanders, Eagles vs. 49ers ($5,200). We will take our chances with Sanders, even though he does not have a favorable matchup against the 49ers. Last week against the Cowboys, the 49ers did an excellent job against Dallas’ running game, holding them to 76 yards on the ground. Philadelphia leans on the ground game a ton and was one of the better teams running the ball in the regular season (147.6). In last week’s blowout win over the Giants, Sanders ran for 90 yards on 17 carries, but Kenneth Gainwell and Boston Scott both poached touchdowns from him. The Eagles will use all three RBs on Sunday, but we should expect Sanders and QB Jalen Hurts to lead the way in the rushing department.

WR Ja’Marr Chase, Bengals @ Chiefs ($7,600). Chase is coming off another solid performance last week, posting five receptions (eight targets) for 61 yards and a touchdown. Chase scored a touchdown in his third-straight game and had double-digit DK points. He should be able to put up similar numbers against a Chiefs’ defense he roasted for seven catches and 97 yards in Week 13. The Chiefs have given up a lot of big plays and TDs to wide receivers, which is one of the reasons why we like the Burrow and Chase stack. Kansas City allowed the seventh-most DK points to WRs (37.3) and second-most TDs to the position in the regular season.

WR DeVonta Smith, Eagles vs. 49ers ($6,800). Smith found the end zone for the first time since Week 16 in last week’s win over the Giants, finishing with six receptions (10 targets) for 61 yards. It was another good outing from the young wide receiver, who averaged 22 DraftKings points per game over his past five games. Smith should be in store for another solid performance against a 49ers’ defense that allowed the fifth-most DraftKings points (37.8) to WRs during the regular season. In both postseason games, San Francisco has allowed 10-catch, 100-yard outings to a wide receiver (DK Metcalf, CeeDee Lamb). Smith can do the same thing, which could give us a three-point bonus on Sunday.

WR Brandon Aiyuk, 49ers @ Eagles ($4,400). The Cowboys’ defense made Aiyuk a non-factor in last week’s game, holding him to two receptions (four targets) for 26 yards. He’ll have a tough time bouncing back against a tough Eagles’ pass defense that allowed the seventh-fewest DK points to WRs this season (30.8). However, given his relatively low salary and big-play ability, he still has plenty of upside and fits well into our lineup as a contrarian play.

TE George Kittle, 49ers @ Eagles ($5,200). The star tight end had a monster performance last week against the Cowboys and was one of Brock Purdy’s favorite targets in the middle of the field. Kittle finished with five receptions (five targets) for 95 yards and 14.5 DraftKings points. It was the fifth time out of his past six games that he has scored 10 or more DK points. With the Eagles having solid cornerbacks, we should look out for Kittle to be featured often in the 49ers’ passing game on Sunday. Philadelphia allowed the 13th-fewest DK points to TEs (11.2) and only three touchdowns this season. That being said, Kittle is one of the best tight ends in the league and will find a way to make an impact in the NFC title game.

FLEX Tee Higgins, Bengals @ Chiefs ($5,400). Higgins had another quiet performance against the Bills last week (three receptions for 28 yards); however, he should play better against the Chiefs. In the Bengals’ first matchup against Kansas City in Week 13, Higgins had three receptions (five targets) for 35 yards and a touchdown. At a $5,400 salary, we are getting a steal for a stellar No. 2 wide receiver in a highly favorable matchup.

DEF Eagles vs. 49ers ($2,800). The Eagles made life rough for Daniel Jones last week, forcing him into an interception and sacking him five times. Philadelphia will try to duplicate that performance against 49ers rookie quarterback Brock Purdy, who has not thrown an interception since Week 17 and has only been sacked three times during the playoffs. With San Francisco having a lot of weapons at the skill positions, it will be imperative for the Eagles’ defensive line to put pressure on Purdy and try to get him to make a mistake.