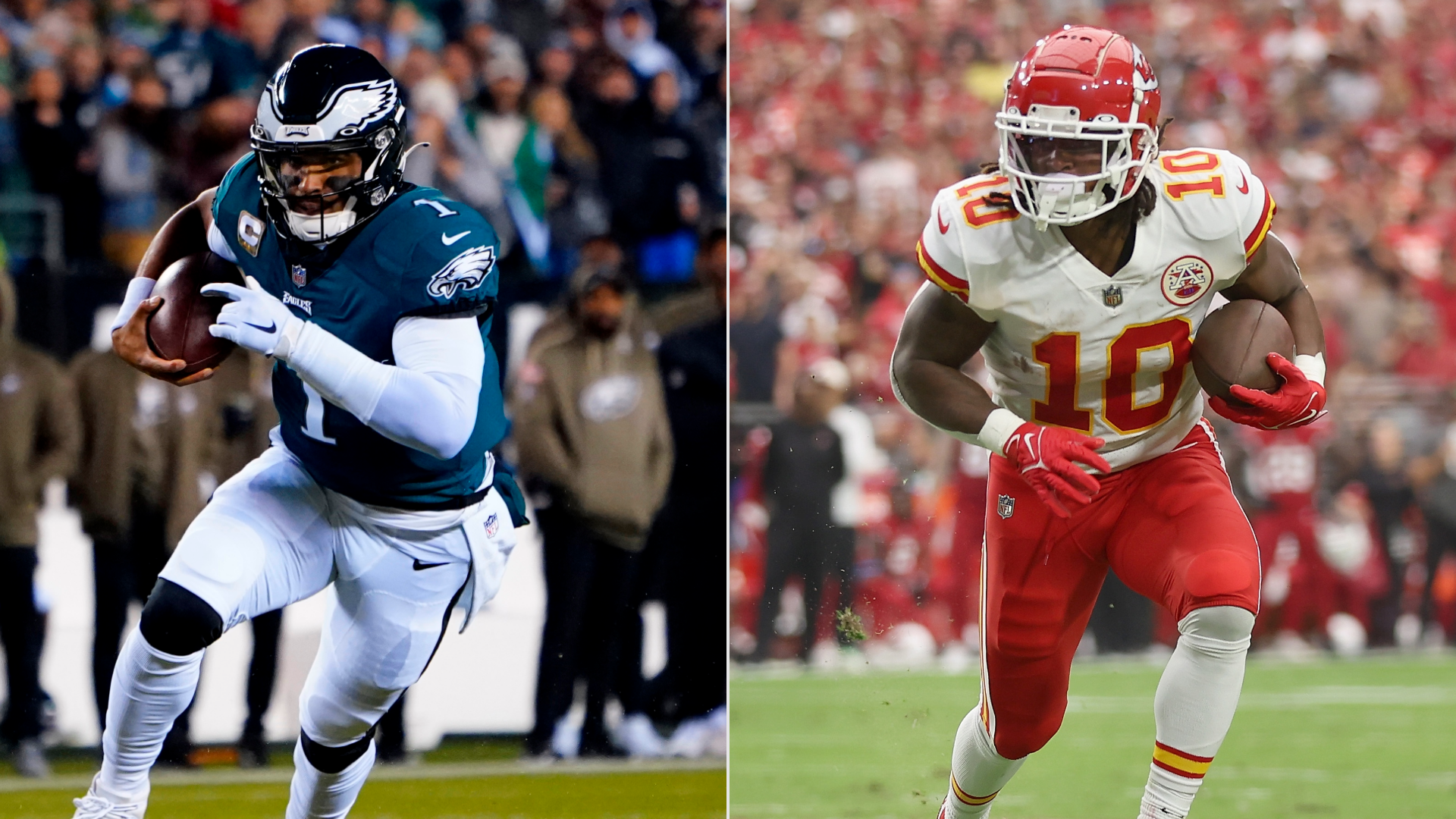 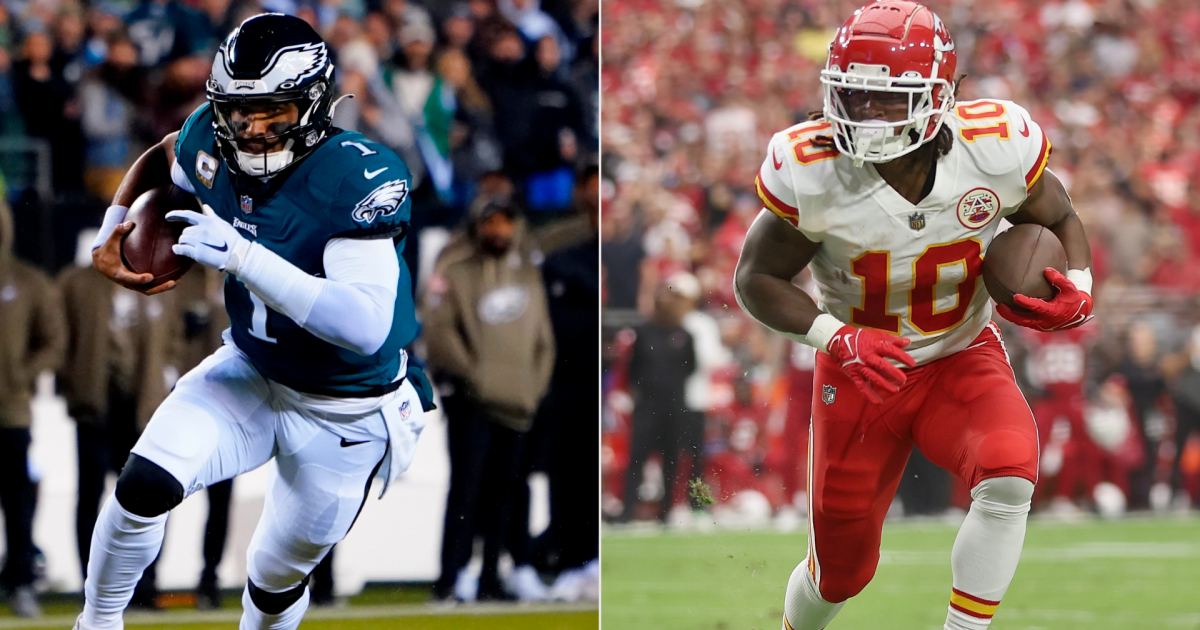 Conference championship Sunday kicks off with the NFC championship game at 3 p.m. ET between the 49ers-Eagles and will be followed up by the AFC championship game at 6:30 p.m. ET between the Bengals-Chiefs. We have a pair of outstanding matchups for Sunday’s slate, which will make it fun for daily fantasy football players trying to win some cash in NFL DFS tournaments. Our FanDuel lineup features a fun Eagles’ QB-WR stack, a couple of standout wide receivers, and a sleeper tight end with a favorable matchup.

Before we break down our picks and strategy, here are the most notable scoring rules for FanDuel contests: four-point passing TDs and half-point PPR.

QB Jalen Hurts, Eagles vs. 49ers ($9,200). The MVP candidate played well in his second career playoff start last week against the Giants, posting 188 total yards of offense and three total touchdowns for 23.56 DraftKings points in Philly’s 31-point win. The third-year quarterback now faces a tough challenge on Sunday against the 49ers, who forced Cowboys quarterback Dak Prescott into two interceptions last week. San Francisco allowed the fifth-fewest DraftKings points to QBs (14.7) during the regular season and will look to keep Hurts in the pocket. It’s a risky play at quarterback, but with the playmakers he has at the skill positions, Hurts can score at least 20 points on Sunday afternoon.

RB Joe Mixon, Bengals @ Chiefs ($8,100). After a quiet performance in the wild-card round, Mixon bounced back with an excellent showing against the Bills last week, posting 105 yards and a touchdown on 20 carries. He was also a factor in the passing game with two receptions (three targets) for 18 yards. Mixon will now face a Chiefs’ defense that was middle-of-the-pack against RBs (19.6) this season. However, Kansas City has also given up the fourth-most receiving yards to RBs, which could benefit Mixon and put him in line for another double-digit performance.

RB Isiah Pacheco, Chiefs vs. Bengals ($6,300). Pacheco shined against the Jaguars last week, rushing for 95 yards on 12 carries in his playoff debut. The rookie played far fewer snaps than Jerick McKinnon last week, but he still led the Chiefs in carries and has averaged 11.63 FanDuel points per game over the past three games. Pacheco has a tough matchup against a Bengals’ defense that allowed the seventh-fewest FanDuel points to RBs (18.0) this season, but with Patrick Mahomes dealing with a high-ankle sprain, we should expect the Chiefs to lean on the run more than usual. He had 66 yards and a touchdown on 14 carries in their Week 13 matchup against the Bengals, and he could easily better that this week.

WR DeVonta Smith, Eagles vs. 49ers ($7,700). Last week against the Giants, Smith recorded six receptions (10 targets) for 61 yards and a touchdown, giving the second-year wide receiver 10 or more FanDuel points for the seventh-straight game. He’s averaged 16.7 points per game over that span. Smith should play well against a 49ers’ defense that allowed CeeDee Lamb and DK Metcalf to each have 10-catch, 100-yard performances in consecutive weeks. If the Eagles can get something on the ground, Smith and A.J. Brown should have opportunities for explosive plays in the passing game.

WR Deebo Samuel, 49ers @ Eagles ($7,000). The star wide receiver had a quiet performance last week against the Cowboys after scoring 25.5 DraftKings points against the Seahawks in the wild-card round. Samuel posted four receptions (seven targets) for 45 yards and four carries for 11 yards, as Dallas limited his run-after-the-catch production. He will try to play better against an Eagles defense that allowed the eighth-fewest FanDuel points to WRs (24.6) this season. Samuel still has a chance to be impactful because of his running ability, so he’s never a bad option.

WR Tee Higgins, Bengals @ Chiefs ($6,700). Higgins had another quiet week against the Bills, only catching three passes for 28 yards. However, we like Higgins to bounce back against a young KC secondary that allowed the seventh-most FanDuel points to WRs (29.6) and 20 touchdowns this season. We all know Ja’Marr Chase will get his targets and be an explosive threat on the outside, but don’t forget about Higgins, who can score a touchdown or two when the Bengals get into the red zone.

TE Hayden Hurst, Bengals @ Chiefs ($5,400). Hurst could be a forgotten man with Dallas Goedert, Travis Kelce, and George Kittle on this slate, but he’s a real sleeper thanks to a favorable matchup against the Chiefs. Kansas City allowed the 10th-most FanDuel points to TEs (10.1) and nine touchdowns to the position this season. Last week against Buffalo, Hurst had five receptions (six targets) for 59 tards and a touchdown (14.4 FanDuel points), and it wouldn’t be a shock to see Hurst score another touchdown as a key red-zone target for Burrow.

FLEX Elijah Mitchell, 49ers @ Eagles ($5,600). Even though Mitchell is dealing with a groin injury, he’s expected to play against Philadelphia. Last week against the Cowboys, the second-year running back had 51 yards on 14 carries and continued to play a key role with Chirstian McCaffrey (calf) also ailing. While his DFS production was not great, it was good to see Mitchell being more productive on the ground after having two yards on nine carries against the Seahawks. Mitchell will try to steal a touchdown against an Eagles’ defense that was middle-of-the-pack against RBs this season (19.7 FD points allowed). He’s risky, but if he scores, he’ll provide the differentiation we need to finish high in tournaments.

DEF Bengals @ Chiefs ($4,000). It’s tough to pick a D/ST for this slate, but the Bengals just held the Bills to 10 points while posting a sack and an interception against Buffalo’s high-powered offense. In their first meeting against the Chiefs earlier this year, the Bengals only scored four FanDuel points, but Cincinnati is the cheapest D/ST and will get the “advantage” of facing a gimpy Mahomes.